Census Bloodbath: Lost In The Woods 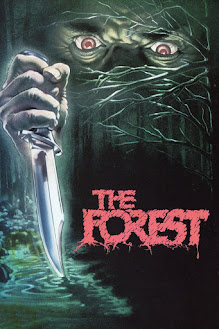 Camping-based slasher movies were pretty de rigeur in the early 80's after the massive success of Friday the 13th spawned a million imitators (and given how deep we are into this project without cracking 1983 yet, that number is barely an exaggeration). 1981 saw five of the damn things, and in fact, 1982 kicked off with one on January 1: Madman. They had reduced to a slow trickle by the time The Forest stumbled onto the scene in summer '82, but who was going to wring the very last drop of blood out of a concept if not for slasher producers? 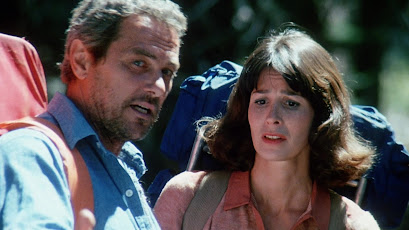 They're just doing their due diligence.

After a satisfyingly cliche intro scene where a hiking couple gets murdered by an unseen maniac, The Forest begins in a huge L.A. traffic jam. Charlie (John Batis), a weedy suburbanite, and his friend Steve (Dean Russell), a Brawny man type with a Tom Selleck mustache decide to go camping this weekend to escape the smog (and their nagging wives). The nagging wives in question are Sharon (Tomi Barrett), the more capable of the two, and Teddi (Ann Wilkinson of Boogeyman II), whose name isn't spoken aloud until a good forty minutes after she bites it, just before the credits roll. I was sitting there, pencil poised, through infinite dialogue scenes where she is never addressed by name, straining to pin down literally anything about this woman's character. Even when the men go searching for their wives in the woods, Steve calls out "Shaaaroooon!" and Charlie calls out nothing. This poor woman's name was the biggest slasher movie reveal of 1982, as far as I'm concerned.

Anyway, Sharon and Teddi have camping plans of their own. They insist on going out a couple days ahead of the men, with the tacit understanding that the men should arrive the first night they make camp. It's a whole Thing. But the men are delayed by car troubles and by the time they reach the site, the women have already been besieged by a cannibalistic knife-wielding maniac (Gary Kent), as well as the ghosts of his cheating ex-wife Jennifer (Jeanette Kelly) and their two kids (Becki Burke and Corky Pigeon). 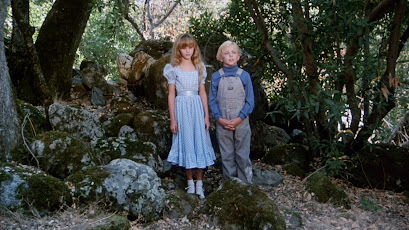 Which ruins my plans to name my firstborn Corky Pigeon.

I'm going to be unusually nice to The Forest, so let me make one thing clear going in: it's not a very good movie. Almost every aspect of it is completely inept.

The acting is like a community theater troupe decided to restage their favorite porno, with three major exceptions. The children, who hollowly deliver Little House on the Prairie dialogue with an echo filter to highlight the fact that they're g-g-g-ghosts. Dean Russell, who projects every line directly into the camera with proud bravado like he's in the opening number of Seven Brides for Seven Brothers, clearly relishing when his character is injured by a riverbank and he gets a chance to loudly wail among the reeds. And Jeanette Kelly, playing John's cheating wife with drag queen vamp gusto, practically licking her lips at how deliciously evil her character is.

The villain also fails to be terrifying, looking more like somebody's drunk uncle who spent the night in a dumpster. He's not helped by the wan chase choreography that asks him to toddle around the woods in full sunlight, attacking in wide shots that keep you annoyingly far from the action but still not hiding how both performers are clearly waiting their turn to make their next move. Or by the editing, which intersperses night footage with material that isn't so much "day for night" as it is "day for day and let's hope nobody notices."

And yet... The Forest was a pretty OK movie. 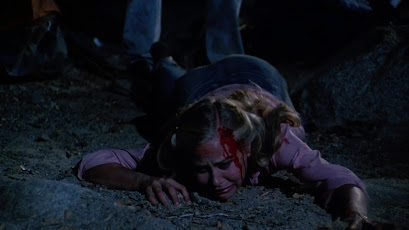 Yes, I know my brain has gone rotten from watching too many of these things.

I will say that the things I liked come with a grain of salt so big it could wipe out the slug population of a small country, but I work with what I have here. First off, the soundtrack is lavishly overproduced, and you know I love digging up weird 80's earworms that never got a chance to make it to the big time. The film is slathered in delightfully shitty rock ballads, including one I believe to be called "The Dark Side of the Forest," and even the incidental score music is bizarre and delightful. There's the beatific TV drama theme song that plays over the opening credits, the synth stings that sound like knocks on a wooden door, and a bunch of other music that is both entirely random and generally better produced than the scene playing out onscreen deserves.

Then there are the kills, which are pretty anemic in the gore effects department, but are actually a little harrowing to sit through. Teddi's death especially is an extended, brutal sequence that is gruesome in its unrelenting approach of staccato bursts of violence rather than its slight smears of Karo syrup blood. And Jennifer's death, revealed in flashback, has even less blood but is even more impactful, her skull loudly colliding with the nightstand it's slammed against to gruesome effect. The scenes find a way to be intense without a lot of blood, and even accomplish a pretty great visual moment when John waves his bloody knife in front of a hiker, reflecting red-tinted sunlight across her face.

The Forest even accomplishes two things I never expect in slashers of this budget bracket: solid pacing and lighting. The film moves along at a pretty brisk clip, only slowing down in the final 20 minutes, which are largely just people wandering through the woods aimlessly. And I've already said my piece about night shifting into day randomly, but that's more of an editing problem, and the thing is that when it comes to properly lighting woodland scenes at night, not even Friday the 13th got that right, so you gotta respect the craft.

As I feel like I've had to say in too many of these reviews recently, no, I don't think anyone should rush out and watch this movie. But if you're someone whose brain is broken like Yours Truly and really needs to get their hands dirty with the slasher genre, it's not an unpleasant hour and change.

Killer: John (Gary Kent)
Final Girl: Sharon (Tomi Barrett)
Best Kill: The blood effect is underwhelming, but the sheer gruesome auditory quality of the thump when Jennifer's head hits the nightstand gets my teeth a-grinding.
Sign of the Times: The men are scandalized that their radiator repair cost $140.
Scariest Moment: When Charlie mentions there might be rapists in the woods, Steve playacts a rape on a visibly uncomfortable Sharon at the dinner table. No, thank you.
Weirdest Moment: In a flashback, John walks in on Jennifer sleeping with another man, which she treats totally nonchalantly, and then reveals that her kids have been locked in the bedroom closet the entire time.
Champion Dialogue: "The only backpacking you ever did was in bed."
Body Count: 7; not including the ghost children, who we never see die onscreen. Cowards.

TL;DR: The Forest is pretty bad, but in a slightly pleasant way that elevates it above a very bad slasher movie.
Rating: 4/10
Word Count: 1275

Also sprach Brennan at 8:07 AM