Census Bloodbath: Your Party Could Not Be Reached 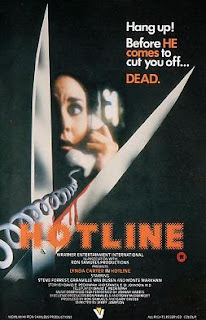 1982 seems to be shaping up to be the year of the slasher film masquerading as a "women's picture" drama, foreshadowing the future of, oh, the entire output of Lifetime. Fantasies was a middle-aged romance with a bit of soap opera star murder thrown in, Exposed to Danger exposed us to the inner turmoil to a woman attempting to regain a regular life after being falsely accused of the death of her father, and Visiting Hours was an unusually keen psychological portrait of an outspoken feminist pacifist. Those are three of my favorite slashers of the year so far, so today's topic - Hotline, a CBS TV movie - has some big shoes to fill. 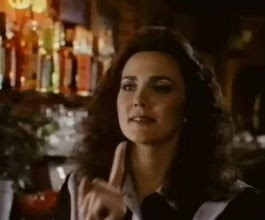 In Hotline, Brianne O'Neill (Lynda Carter, of all people) - pronounced "Brian" - is a jack of all trades. She takes art classes, assists her disabled boss Kyle Durham (Monte Markham), the former stunt double to fading movie star Tom Hunter (Steve Forrest), and tends bar at Kyle's four nights a week. When she deescalates a potentially violent sexual advance from a customer, she attracts the notice of Justin Price (Granville Van Dusen), a psychiatrist who could use her help at the West Side Hotline, an emotional support call center he operates in the area. His character never comes to much, but I would be remiss if I didn't mention that Harry Waters Jr., Marvin Berry from Back to the Future himself, also makes his debut as the lead at the call center.

She takes the job, and almost immediately receives a call from a creepy man who claims to be a murderer and gives her sinister rhyming clues to his identity and past misdeeds. When the body of a woman is discovered on a nearby beach, she realizes that this killer ain't a kidder, and begins to investigate his claims while receiving increasingly threatening phone calls. 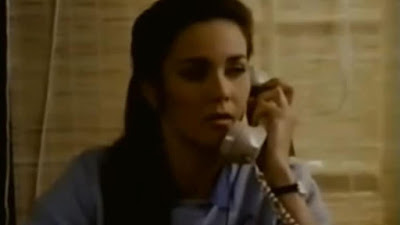 (Spoilers abound for the remainder of this review, by the way)

The thing that concerned me immediately, and then persistently throughout Hotline is that it's really not a slasher movie. It has all the hallmarks of a slasher (and in fact takes its plot wholecloth from the grubby 1980 Don't Answer the Phone), but it just... doesn't have the body count. All the murders committed by our killer have taken place before the events of the movie and don't occur onscreen, even in bloodless, demure, made-for-TV sort of ways. I have grave misgivings about even including this film in Census Bloodbath, but I did include it for several reasons.

First, I didn't want to have wasted my time watching this one. That's probably the biggest motive. Second, the movie and its particular plot quite clearly wouldn't exist without the dozens of slasher movies flooding the market for the previous two years. Third, it was reviewed on The Hysteria Lives, one of my most trusted slasher sites, and a major resource I used in originally building out my To Watch list. There just isn't any murder other than the eventual death of the killer himself.

Unfortunately, what we're left with really doesn't pass muster regardless. The burgeoning romance between Brianne and Justin is shunted offscreen almost as much as the murder - the steamiest thing we get to see is a hot tub scene where he... kisses her on the forehead. I knew I was watching a movie made for network television so I couldn't expect too much of the taboo material, but I frankly don't see the point in barely even hinting at it. 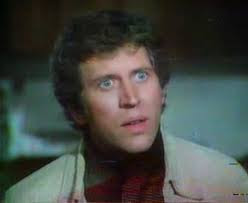 Although they do get to bring to life an intimate couples moment that really resonated with me, when she steals his pillow once he gets out of bed.

On top of that, the murder investigation frankly isn't even that interesting. Brianne gets most of her information offscreen, and there aren't much in the way of red herrings. They begin to suspect that Tom is the killer, because the killings all occured in places where he traveled to throughout the years, but they offer up the option that it might also be Kyle because they're inseparable. And guess what? It's one of them! Shocking! Hotline doesn't so much twist and turn as gently switchback down the slope toward its destination.

At least the phone calls that Brianne receives are legitimately skin-crawling. They obviously can't resort to the power of the uncanny coarse language used in something like Black Christmas, but there's something about the sinister singsong tone the killer uses that is disturbing in and of itself. And even if the script can't find the energy to really let her work her backstory, Carter knows how to throw herself into the role physically, bringing the final chase scene to electrifying life. Plus, you know I love the deliciously homoerotic undertones of the eventual killer reveal. Actually, come to think of it, it's entirely possible that Quentin Tarantino had this movie, specifically Tom and Kyle, in his head when he was writing Once Upon a Time in Hollywood.

Really, the most interesting thing the movie has going for it is the random amount of star power it has gathered around it. Obviously there's Lynda Carter, who does a great job as a damsel in distress with fringed sleeves, a capable woman whose terror is just barely starting to show hairline cracks in her strong demeanor. But the writer David E. Peckinpah is the nephew of respected filmmaker Sam Peckinpah, appearing in the role of Leo (a character I don't remember) is Downton Abbey creator Julian Fellowes, and the film was shot by Matthew F. Leonetti, who just in that year alone shot Fast Times at Ridgmont High and Poltergeist. Certainly this is the least of his efforts, seeing as Hotline includes both a shot of the camera panning past the front of a plane sitting on the tarmac to give the impression that it's taking off, and a scene in an elevator where the frame wobbles every time they stop on a floor.

I didn't hate watching Hotline, I was merely disappointed by it. It squanders its potential to be anything like its sister films, even Fantasies which was itself a television movie for ABC. It wasn't a complete bore to watch, but it offers the bare minimum of what it could possibly have to give, like a corporate CEO donating to Black Lives Matter.

Killer: Kyle Durham (Monte Markham)
Final Girl: Brianne O'Neill (Lynda Carter)
Sign of the Times: Brianne gets paged at the airport because she has a call on the courtesy telephone.
Scariest Moment: Justin breaks into Brianne's home... in order to tell her that somebody else broke into her home?
Weirdest Moment: A gay British sales clerk (who I now suspect to be Julian Fellowes) is selling Brianne a device to record phone calls, which he demonstrates by prank calling some random stranger and telling him, "darling, I'll be home late tonight."
Champion Dialogue: "I think there's a full moon tonight. The fanny grabbers are out in force."
Body Count: 1; though she investigates four murders that took place before the events of the movie.
TL;DR: Hotline is a wholly mediocre movie that doesn't hurt to watch, but it hardly brings pleasure.
Rating: 4/10
Word Count: 1228
Also sprach Brennan at 8:09 AM