Census Bloodbath: The Mind of a Married Woman 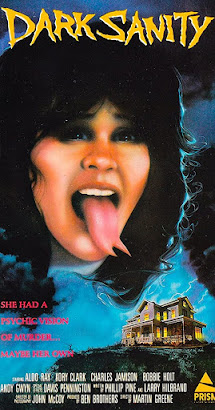 OK, I have a bone to pick with my slasher resources. I can be very lenient with what counts as a slasher movie. I'm perfectly happy to include Road Games, which only has one onscreen death, because it is about the pursuit of an active serial killer. And I hesitantly embraced Hotline, even though the killer commits zero murders during the time frame of the film, for similar reasons. But 1982's Dark Sanity is really testing my patience. What imaginary line does a film have to cross become a slasher? If it has an axe-wielding murderer, a plummy reveal of their identity, and a severed head, but not a single human being dies onscreen during the events of the film, what the hell is it? 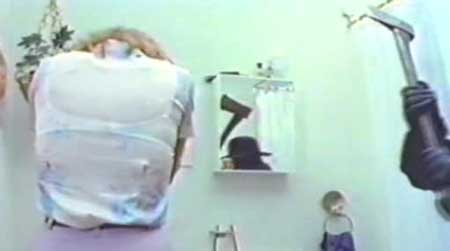 I'm very tempted to say "not a slasher," but again I'd rather err on the side of including it so I didn't just waste 88 minutes of my time.

Dark Sanity, also known as Straight Jacket, tells the tale of Karen Nichols (Kory Clark), a woman who has just been released from the hospital after her alcoholism triggered violent psychic visions that she had repressed since she was a child. She has been off the sauce for 9 months and she and her husband Al (Chuck Jamison) have moved to L.A. for a fresh start.

Unfortunately, as she slowly learns from her neighbor Madge (no actress listed on the extremely sparse IMDb listing, sadly, because her character reminded me of Mona from I, Madman, everyone's favorite earthy lady), the creepy gardener Benny (no actor listed, though he looks uncannily like Scott Adsit from 30 Rock), and local ex-cop Larry Craig (Aldo Ray, the only person in this movie there's chance you've heard of), their new house is the site of a dreadful murder. Lucy Duncan was decapitated and nobody has ever been able to find the head! The police apprehended their son, but Larry has also been having psychic visions and enlists Karen to help him discover the true identity of the murderer. 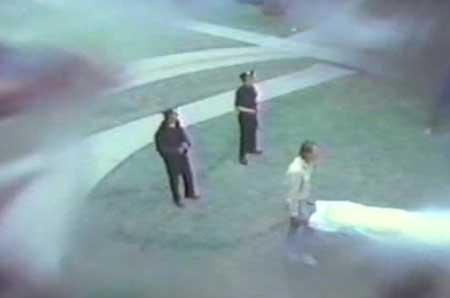 These visions are... not stylish.

As I may have mentioned, Dark Sanity challenges the very reason we're gathered hear to talk about it. If it's not a slasher movie, it doesn't deserve space on this feature. For the most part it just isn't. It's a gaslighting story about a woman who has been told for years by doctors and her husband that her clairvoyance is a mental illness, who has taken to believing them. I like a domestic psychological drama, even if the execution is dogshit, so I guess that's good news on both counts, because this is neither a slasher nor a well-made movie. And yet there are those elements I mentioned above.

Although the only thing we could conceivably call a body count kill (Mrs. Duncan's death is only seen in choppy visions of the aftermath, the killer gleefully bearing her severed head) is of a cat, there is ever so slightly enough drawing on the tropes of the slasher genre in the final ten minutes as well as the material with the creepy groundskeeper red herring. I can maybe appreciate that it is structured almost like When a Stranger Calls, bookended by slasher moments rather than being a true blue all-out slasher. 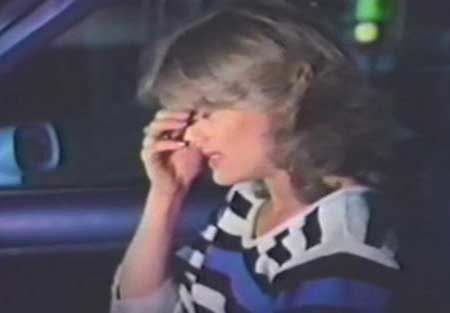 No? Just Me? Alrighty then.

But whatever type of movie Dark Sanity is, it's a quite poor one. The sound design is truly out of hand, with random tiny actions exploding from the speakers like a gunshot and foley work so misguided that a hissing snake sounds exactly like my phone vibrating (I actually had to check if I was getting a call). And at no point in the movie does any character actually act like a human being: Karen imagines that an empty closet is full of clothes and screams like a banshee. Al's boss's wife goes on and on about how much she loves Jack Benny, who died a full six years before this film came out. The movie itself makes decisions just like one of its characters, when 15 minutes before the end it cuts to a three minute scene of Benny shooting the shit with a random bartender we've never met before.

Also obviously the acting is sub-par. Aldo Ray is sleepwalking through the part, though he seems to think he's in a soap opera which is amusing. And everybody else ranges from unremarkable to flat-out abysmal. Al's boss in particular has completely hollow eyes that always fail to match whatever rigor mortis facial expression he attempts to pull.

The actual act of sitting through Dark Sanity wasn't entirely excruciating, because the best moments had that domestic chiller quality I enjoy, and the worst moments are generally amusing in their inanity. But would I recommend it to a single human being? Of course not! The reason I do this project is to separate the wheat from the chaff, and this is definitely all chaff.

Killer: Madge
Final Girl: Karen Nichols (Kory Clark)
Best Kill: The flashback sequence is barely even a kill, but it's the only human death, and honestly the severed head prop is actually halfway decent.
Sign of the Times: I'm having a hard time choosing between the fact that a beer cost fifty cents, or that Madge had to hang up a phone call while watching her soap opera because she couldn't just pause the television.
Scariest Moment: When Al gets fired and comes home to drunkenly scream at Karen and try to force feed her whiskey, it is genuinely affecting and tense.
Weirdest Moment: Madge comes in to show Karen a new workout, which is literally just pushups but with terrible form.
Champion Dialogue: "Your missus is just fine as frog's fur."
Body Count: 2; but then again, not really

Also sprach Brennan at 8:31 AM