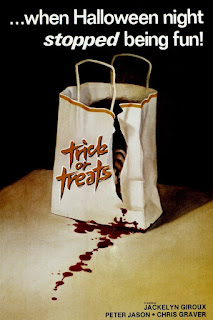 I think covering The Clairvoyant yesterday lured me into a false sense of security RE: awesome slasher movie posters. That movie both had an incredible poster and turned out to be a largely incredible movie, which I should REMEMBER is almost never the case. Enter Trick or Treats. Take a gander at that key art up there and you should have an idea of what a trainwreck we're in for. 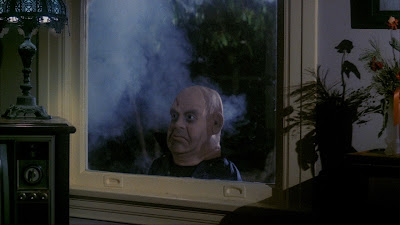 This is why we can't have nice things!

Trick or Treats takes place on Halloween night. Linda (Jacqueline Giroux) has plans to attend opening night of her boyfriend Brett's (Golden Globe nominee Steve Railsback, who we'll revisit later this month in 1982's Deadly Games and later... whenever in 1986's The Wind) play. The play in question, which stars the extremely white Brett, is Othello. He's playing Othello. In case you're not a Shakespeare scholar, Othello is Black. Thank every god in every religion Steve Railsbeck is not in blackface, but it's still... a choice. Also what kind of crowd a whitewashed performance of Othello gets on Halloween night is beyond me. Anyway...

She can't attend the play because the Agency calls her with a last minute babysitting gig. She must care for a young magic-obsessed boy named Christopher (Chris Graver, who - wouldn't you know it - is the director's son) whose parents are going to a last minute Halloween party in Las Vegas. The parents being Richard Adams (David Carradine, of David Carradine), a lascivious weirdo who flirts with Linda and unzips her shirt, and Joan O'Keefe (Carrie Snodgress), who had her previous husband committed to an insane asylum so she could get his house and his millions.

Turns out that husband is one Malcolm O'Keefe (Peter Jason), who has designs on escaping the asylum and returning to his rightful home tonight! 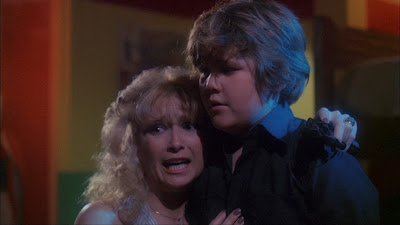 Whether or not Christopher is the son of Malcolm or Richard is left ENTIRELY unclear. But don't worry. It's not the only thing.

Trick or Treats opens on Joan surprising her husband with a visit from the authorities, who have come to put him in a straitjacket and cart him away. This scene is strangely prolonged, as Malcolm fights against the men, climbing trees, kicking them into the pool, and wrestling away from them any way he can. It's uncanny and strange in the way it goes on too long, but the way the film just sits with it really drove home the visceral, unpleasant nature of the moment. Unfortunately, every other scene in the movie is also prolonged and unpleasant, but to less effect.

And really, there are only three types of scene that the film cycles through ad nauseam until the boring final ten minutes of Malcolm chasing Linda around the house, thinking she's Joan (presumably because the lighting in the movie is so bad he couldn't tell).

The first type of scene is a woman interacting with a man who seems about twelve seconds away from a full-on sexual assault. This unnamed California town is apparently crawling with predators, who will latch onto any woman or man dressed as a woman (Malcolm spends a great deal of the movie in a stolen nurse's uniform - where he got the wig is anybody's guess) and lasciviously come on to her until she escapes his clutches. This is also true of any teenager and even Christopher in certain scenes.

The worst offender is Richard Adams, whose leering come-on I already detailed above. The discomfort is not eased by the fact that David Carradine is giving an immensely odd, aloof performance. He drifts around the screen in random directions, stretching languorous pauses between words. He knows how much better he is than the material, and there's a perpetual wicked glint in his eye of the knowledge that he can get away with performing any damn way he wants, because who is Gary Graver to tell David Carradine no? 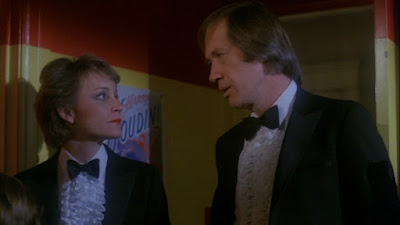 And honestly I respect how much he palpably dislikes being in this film, because it makes me feel less alone for finding it a grueling experience.

The second type of scene is the wacky hijinks of Malcolm attempting to make his way home, which shoehorn in a lunatic attempt at comedy that must be seen to be despised. The third type, which forms the bulk of the movie's run time, is of Christopher pulling a prank on Linda with his magic equipment, including at least three instances of faking his own death. This little stinker really puts her through the wringer, not letting up for a single second he's onscreen, trading incessantly between ruthless pranking and acid-tongued quips performed like the kid from The Babadook's acting coach was Rob Zombie.

If the goal of the film was to put us in Linda's headspace of experiencing an intensely irritating child for hours on end, it succeeded. It's a frightful thing to experience, and the movie resolutely refuses to behave like a good slasher and break up the gloom with fun murder sequences. In fact, nobody even dies in the movie until the third act. Only one murder is perpetrated by the killer himself, and it's so poorly lit and edited that it's not even super clear what happened. It's even less of a slasher movie than the same year's Hotline, and in that movie the killer took down literally zero people on screen.

It's clear from the tropes it's drawing upon and the structure it sets up that Trick or Treats thinks it's a slasher and dearly wants to be one, but it's actually just a prolonged, rejected submission to America's Funniest Home Videos. The shoddy, easily distracted script sees to that. Characters just vanish (we never see Christopher's parents again) or keep cropping up without playing important roles in the narrative (we spend a lot of time with Bret for a character who only interacts with Linda over the phone). Hell, the movie can't even keep track of what pet the O'Keefes have! Joan reminds Linda to feed the dog. We never see a dog in the ensuing 90 minutes, but we do get a cat scare. 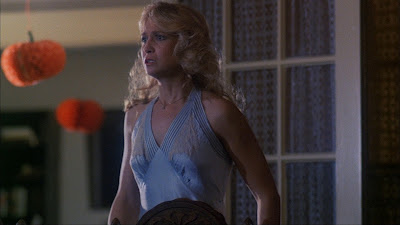 Trick or Treats is a bottom-of-the-barrel slasher movie, and this is coming from someone who has devoted his life to probing every last splintery inch of that barrel. Literally the only redeeming quality of the film is the fun New Wave song that opens and closes the story ("Help is On the Way" by Horizon, which I can find nowhere on the Internet). OK, maybe that's not true. I do also like the increasingly angry way that Linda deals with the trick or treaters coming to the door, eventually just tossing candy at them and slamming the door. That was cathartic.

But Trick or Treats is a slasher-comedy film that is neither interested in making us scream nor making us laugh. It is, however, interested in having us sit down with Linda as she tells the entire "Boy Who Cried Wolf" story from start to finish uninterrupted. What a brutal, unrelenting, punishing, slog. I almost gave it a 1/10, an honor that has until now been reserved only for the worst slasher movie ever inflicted upon polite society.

But I changed my mind for two reasons. First, bad as it is, Trick or Treats is nowhere near the black hole of irradiated garbage that is The Outing. Second, there's a scene where an editor friend of Linda's agrees to drop off her acting reel because the O'Keefes' house is right by her hairdresser, where she was headed anyway, and I had a fun five minutes imagining what scenarios could have brought her to a salon past midnight on Halloween. Good times.

Killer: Malcolm O'Keefe (Peter Jason)
Final Girl: Linda (Jacqueline Giroux)
Best Kill: As if there even were any to speak of.
Sign of the Times: It cost 35 cents to ride the bus.
Scariest Moment: The part about 80 minutes in when I realize nobody else was going to be murdered onscreen.
Weirdest Moment: Two asylum inmates who think they're Antony and Cleopatra are caught having sex in the men's ward.
Champion Dialogue: "Amigos! A me goes!"
Body Count: 3; and that's reeeally a stretch
TL;DR: Trick or Treats is an abysmal slog that doesn't even attempt to embrace the tropes of the slasher genre, let alone resemble an actual narrative motion picture in any way.
Rating: 2/10
Word Count: 1448
Also sprach Brennan at 7:24 AM