Census Bloodbath: The Game Of Death 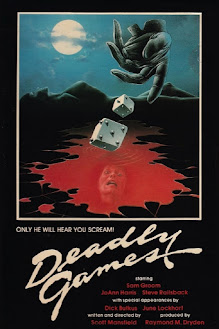 No, I'm not going to open another one of these reviews lusting after how spectacular the poster for an 80's slasher movie is. No way. Not gonna do it. So, um... Deadly Games (not to be confused with the 1989 French home invasion film Dial Code Santa Claus, which was released under the same title) is... actually you know what, there's almost no information out there about where the film came from or why it exists, and there's certainly no evidence in the film to answer the latter question. So let's get right into it! 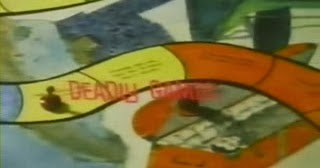 That poster's real cool though, innit?

So. Deadly Games. After Linda (Alexandra Morgan) is menaced in her home by a masked man and falls out a window to hear death, her music journalist sister Clarissa Jane Louise Lawrence (Jo Ann Harris) AKA Keegan comes to town. She is reunited with some old friends and frenemies, including waitress Mary (Denise Galik of Don't Answer the Phone) and her diner owner husband Joe (Dick Butkus, a name created to give playground bullies so many options that their brains melt right out of their ears). She begins a romance with cop Roger Lane (Sam Groom), whose best friend is injured Nam veteran Billy Owens (Steve Railsback of the same year's Trick or Treats among other things you're more likely to have heard of), who skulks around the local abandoned movie theater watching old monster movies and playing a monster-themed board game.

You'd think, given the title, that the board game has a huge part to play with the killings by a ski mask-clad maniac that strike this small town, but you would be wrong. 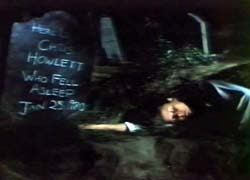 You would also be wrong to assume that a movie with a poster that awesome couldn't be bad.

I guess I should start with what Deadly Games gets right, because that's a pretty quick conversation. Well, it's actually quite good at jump scares, especially for a slasher movie of this budget and vintage. The killer is always lurking in the the corner of the shadowy frame (very shadowy if you watch a bad VHS rip like I did) that you least expect, grabbing at our victims in sudden jolts of shock. Unfortunately the kills that follow are unfailingly bland. I don't think there's even a drop of blood present in this entire movie, and not one creative weapon spices up the slew of bog standard drownings, strangulations, and whatnot. I might feel like a sociopath for writing a sentence like that, but it's true, dammit! A slasher at this budget level can't dream of having effective gore, so it needs to spice the kills up with literally any amount of imagination. Why not go with the "game" motif the film so obviously could and should have been built around? Shoot spiked dice at people or something, I don't know.

It's probably telling that the one paragraph that contains a compliment about something other than the poster devolved so quickly.

Deadly Games fails as a slasher movie in pretty much every way. Literally every character looks alike so you're too busy asking yourself "Is that Carol? Or Chrissie? Ruby? Was there even a Ruby?" to actually care about whether or not they live or die. And the body count is just pathetic, taking a severe dip after a pair of opening kills, briefly flirting with becoming a cheesy romantic comedy more than anything else. 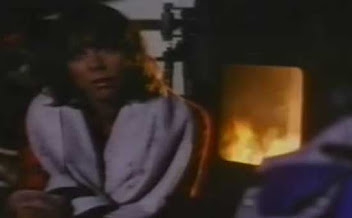 Complete with a cheesy "Beauty and the Beast" esque love ballad over a montage.

No, not an effective slasher. But it's the things that make Deadly Games an ineffective film that are the most interesting. Remember the kinds of movies I make myself watch on any given day so you can let the full gravity of the statement I'm about to make really sink in: This is one of the most incoherent films I've ever seen.

Deadly Games puts on a good show at first, arranging genre tropes in such a way that it almost disguises itself as a normal movie, albeit with some jags into weirdness like the fact that Linda stands on the front porch of her house topless and massaging her own breasts but then puts on a shirt when she needs to go inside to answer the phone. Or the endless circuitous conversations about people we'll literally never see onscreen (the cavalcade of names making it even more impossible to tell who is onscreen at any given time) filled with lines that are almost, but not quite, like things actual people in a small town might say.

It's at the halfway point that this facade crumbles away, and Keegan emerges from her cocoon of bland competence and performs the rest of the film like she's a drunk baby. She babbles to herself in high pitched voices, performs entire scenes as multiple characters all interacting with one another, and laughs and claps gleefully at every boring thing she, Roger, and Billy get up to. Her truly bizarre energy permeates the rest of the film, and suddenly every character is going off on unmotivated Tennessee Williams monologue rants, or casually pointing guns at their wives over the dinner table, or saying lines of dialogue like (and I quote) "rag mops with towels on their head don't normally go out until at least March or April."

This all culminates in a finale that feels like every other scene was accidentally cut out. Characters just sort of arrive places, knowing things we never saw them learn, and rushing the film to its dramatic [sic] conclusion with literal seconds to spare. It is pure chaos, and while it was somewhat fascinating to watch unfold, it certainly doesn't equal a good movie in any sense of the word.

Killer: Roger Lane (Sam Groom)
Final Girl: Clarissa Jane Louise 'Keegan' Lawrence (Jo Ann Harris)
Best Kill:  Chris is buried alive in a setpiece that is neat first because it's lit well enough for you to actually see it.
Sign of the Times: There is a long conversation about the women's husbands maybe having "homosexual tendencies."
Scariest Moment: Keegan rushes to answer the telephone in the dark and when she reaches for it she discovers that a man is sitting on her bed by the phone.
Weirdest Moment: One of the gals hanging at the diner orders a low cal burger plate with a side order of spaghetti and a Tab. You know, as one does.
Champion Dialogue: "I haven't told anyone my name in ten years..."
Body Count: 5

TL;DR: Deadly Games is a completely incoherent mess that manages to disguise itself as an only slightly incoherent movie for about half the runtime.
Rating: 3/10
Word Count: 1156

Also sprach Brennan at 8:04 AM