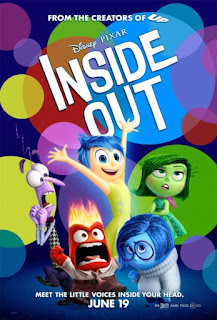 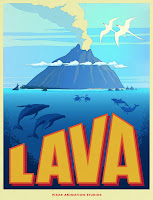 As you well know, all Pixar features begin with a short film. These range from the cute and cuddly Partly Cloudy to the downright revolutionary animation masterwork Day & Night. Unfortunately, they can also apparently be deathly dull, aimlessly derivative wet farts based around an irritating acoustic noodle that centers on one of the worst puns in modern history.

Like, fine. Lava is a cute story. But it's utterly predictable, terribly cast, and arbitrarily bleak before the climax. Perhaps it wouldn't be so devastatingly disappointing if it hadn't come from Pixar. It would be a great senior thesis animation film, but it's a bog-standard bore in the context of the company. Lava is inane and pointless in the extreme. And I don't want to waste any more time thinking about it. 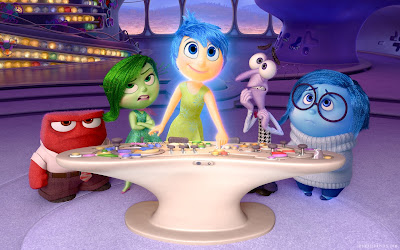 Any of you got the remote? I'd like to switch this off.

Inside Out, on the other hand, is just plain terrific. The film tells the story of 11-year-old Riley (Kaitlyn Dias) following her family's move from their hometown in Minnesota to a small property in San Francisco. This life change shakes everything around her up considerably, but nothing compares to the shake-up that's happening inside her mind. Her emotions, which manifest as anthropomorphic beings in the headquarters of her brain, are controlled by Joy (Amy Poehler), Sadness (Phyllis Smith), Fear (Bill Hader), Digust (Mindy Kahling), and Anger (Lewis Black).

Joy is the de facto leader of this crew, and the emotion whose capacity is valued above all others in giving Riley the best possible life. However, following the move, Sadness finds herself going a little haywire. She can't resist touching Riley's memory spheres, infecting them with her sadness. Joy tries to stamp out this behavior, but their constant infighting leads to Joy and Sadness being sucked right out of headquarters with Riley's core memories (happy memories that power different facets of her personality) and dumped unceremoniously in long term memory. Thus begins a wild adventure through Riley's imagination and memory as Joy and Sadness team up with Riley's old imaginary friend Bing Bong (Richard Kind) and attempt to bring the core memories back to headquarters before it's too late.

Meanwhile, Riley, left with only Anger, Disgust, and Fear, is struggling to adjust to her new school, new house, lack of new friends, and parents who don't seem as invested in her as they used to be. They still love her, but the stress of the move has put a strain on her Mom (Diane Lane), and her Dad (Kyle MacLachlan) has been buried in work, preventing him from spending much time with her. 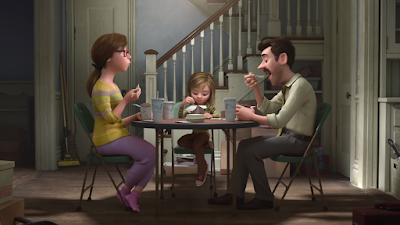 It doesn't help that the excessively gray production design positively aches for you to punch yourself in the eyes.

The underlying metaphor couldn't be clearer if it was in a Claritin commercial: Riley's rough transition damages her delicate pre-pubescent emotional equilibrium as she struggles to grow up just a little bit, learn to manage her emotions, and find her new place in the suddenly scary and unfamiliar world that surrounds her.

There are quite a few things that Inside Out does best. The first of these is humor, which takes a great heap of universal experiences, whips them into a lather, and spreads it liberally across every surface of Riley's mindscape. Inside Out is really a fabulously funny movie, whether you're an idiot six-year-old with your finger reaching halfway to your brain through your nasal passage or an immensely intelligent, startlingly handsome adult like certain film bloggers I might mention. It completely avoids the pitfalls and inclinations of most family comedy: slapstick and scatological humor is scattered to the birds, replaced with warm character-driven humor and endlessly clever variations on what it really means to exist inside a person's mind.

The second of these things is (quelle surprise) the emotion of the story. This is no deep shock, seeing as Pixar has made a name for themselves as the world's leading purveyor of psychological torture to children, but for a film in which half the characters are literal physical manifestations of emotions, Inside Out is keenly focused on beating yours to a bloody pulp. In pursuit of its deepest themes about stress, change, loss, and memory, the film puts your mind through the wringer with adept skill and infinite compassion. 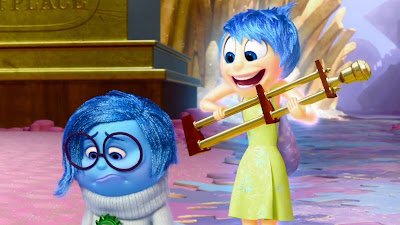 She's practicing for the Oscar.

Third and finally (Well, at least for the confines of this review. If I covered every minute detail of why Inside Out is a great film, we'd be here until Toy Story 4), Inside Out boasts supremely skilled animation. The aesthetic is uncomplicated, but the film is no less valuable for it. The emotions and their surroundings are soft, inviting, and awash with color, contrasting sharply with the stark, Spartan design of Riley's world.

The emotions themselves are also little miracles of character design. Generally defined by a single color, the emotions provided an enormous challenge to animators, but the infinitely variable texturization of their hair, skin, and eyes provides a stunningly simple answer to the problem of keeping them from blending into themselves like the world's most confusing chameleon.

The boundlessly creative world building that dominates the film provides Inside Out with its heart and soul. Riley's mindscape is a world where anything can happen, and frequently does with aplomb. It's an animated film that, for the first time in forever, embraces the energy and life available to the medium, wrapping its viewers up in an enormous, glowing embrace. 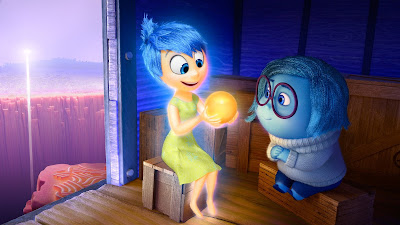 Also, you'll want to own plushies of every single character. It's just a fact of life.

The only element of Inside Out that comes remotely close to being a genuine flaw instead of a "not perfect" is the storytelling, which is remarkably light. The heft, humor, and subtext come out in glittering droves, but the film lacks a fair amount of vigor when it comes to crafting an actual adventure story with stakes, conflict, and drive.

So Inside Out is a little bit slack as an actual narrative, but it makes no excuses for it. The film is about the profound power of emotion, not sumptuous storytelling. It's pure and simple, and it distills that power into a heady, unforgettable, hilarious, tragic, utterly recommendable concoction.

But seriously though, Lava sucks.

TL;DR: Inside Out is an immensely simple story, but an effervescent and powerful one.
Rating: 8/10
Should I Spend Money On This? If you don't, you'll be sad forever.
Word Count: 1099
Also sprach Brennan at 11:38 AM