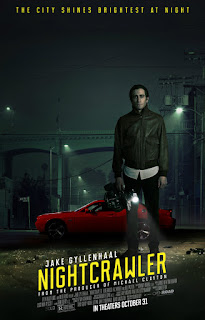 Once you get past the initial disappointment that Nightcrawler is not an X-Men spin-off, you’ll find that it’s a remarkably excellent film, teleportation or no teleportation. 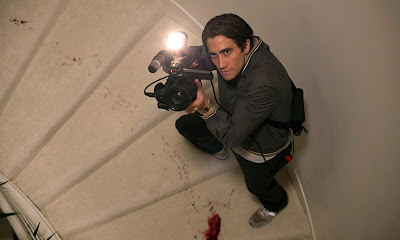 I wouldn't mind having the ability to teleport away from that hair.

Nightcrawler is about the scariest things that go bump in the night: freelance news agents. When Louis Bloom (Jake Gyllenhaal) discovers that he can trawl around Los Angeles in the middle of the night with a camcorder taping grisly crimes and sell the footage to news stations at a massive profit, he jumps at the opportunity. He’s career-driven, well-spoken, ambitious, and totally insane, which makes him pretty much perfect for the job.

Soon he finds himself an employee/navigator: Rick Garcia (Rick Garcia), a young, hungry man with nothing to lose. Together, they rise to prominence and Lou strikes up a relationship with Nina (Rene Russo), a news director at the lowest rated station in LA who is willing to pay top dollar to outdo her competitors. This includes ignoring the moral implications of Lou’s methods, which involve trespassing, obstructing police, and ignoring wailing victims in pursuit of the perfect shot. Their relationship is based on about 50 percent blackmail and 50 percent creepy carnage fetish. 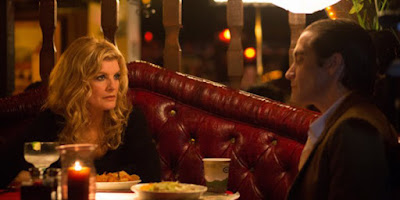 They got a real healthy thing going on, those two.

Nightcrawler is a brooding and slow-paced exercise, plumbing the depths of the dark shadows and empty spaces of the city. It’s more mood piece than traditionally structured narrative, excellent for anybody who wants to take a quick wallow in the gritty underbelly of modern media. For those to whom that isn’t exactly an enticing prospect, the film also kicks up the slow boil to provide a bubbling, frothing, overflowing burst of supreme thriller action in the third act. But where it excels in the first two thirds are in the quiet, the contemplative, and the beautifully macabre.

This tone could not have been achieved without three things: The first is the slick cinematography by Robert Elswit, who must be an indescribably evil man considering his intimate, delicate kinship with darkness itself. His camera embraces the night, making shadows come to glistening life and even swathing the daylight scenes in cloying, omnipresent black. The second of these is the score by James Newton Howard (also the man behind last year’s “The Hanging Tree,” from Mockingjay – Part 1), which provides a beautiful, percussive, almost fantastical counterpoint to the gruesome nature of Lou’s subjects. The keening, soaring, indelible orchestration pulls the sweaty, ill-begotten excitement straight out of Bloom’s mind and converts it directly into music. It’s the sonic equivalent of the sick satisfaction of picking off a scab.

The third and final tentpole of Nightcrawler is Gyllenhaal himself, who is absurdly fantastic, trading out his movie star charisma to become a pale, sickly speck of a man who still manages to maintain that same sort of magnetic pull. His mannerisms, soft-spoken and almost prim, lend dreadful clarity to his amoral actions. Actually, he’s rather like Sheldon Cooper come sour, come to think of it. Gyllenhaal inhabits the role mentally and physically, more completely than I think anyone, including himself, could have imagined. 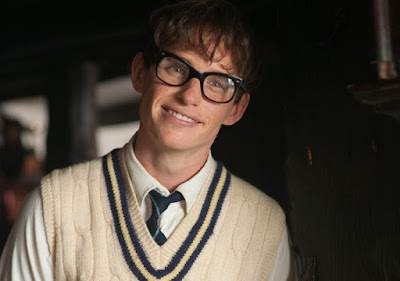 And yet Eddie Redmayne won for this.

In addition to being a nail-biting thriller welded onto a gloomy slow-boiler, Nightcrawler is a film where the subtext is almost more prominent than the text itself. It’s an unflinching look at how exactly the news (and, by extent, the media) shapes our reality. It’s no coincidence that Lou opens the film attempting to sell illicit scrap metal. He treats humans the same way, impassively collecting and packaging them like so much waste, creating a story that fits his own imaginary narrative rather than the one that life has laid out for him.

The excellent cinematography also endeavors to drive this point home, depicting its grisly subjects largely through the viewfinder of Lou’s camera rather than his own eyes. His own world – the world of news media – is profoundly separate from reality, and in the gulf of that separation lies the film’s true darkness.

Yes, Nightcrawler might be a little ponderous and a bit too keenly repetitive in its opening scenes, but that doesn’t stop it from being one of the most profoundly effective (and affecting) thrillers of the decade so far.

Take a wallow on the dark side, why don’t ya?