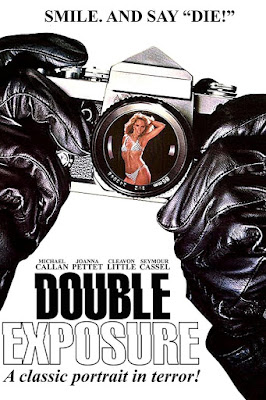 I'm really trying not to open every slasher review by talking about the poster, because I don't want to rely on this as a crutch to dump out an easy intro. But Double Exposure not only has a fun poster, it uses the white color scheme that hasn't ever been common in horror except for the brief time that the Saw movies were in vogue. We'll just have to see if the movie runs as against the grain as the poster does!

So far so bad!

Double Exposure follows Adrian Wilde (Michael Callan, who probably wouldn't be pleased to learn that I recognized him from Leprechaun 3, although he was also in former Cardboard Science offering Mysterious Island, so I think he's the first person to appear in both my 80's slasher marathon and Hunter's 50's sci-fi flicks which is neat) a photographer for a men's magazine. He is dealing with the emotional ups and downs of his divorced stunt driver brother B.J. (James Stacy), who is missing an arm after a terrible accident. He has been having his own ups and downs, what with those terrifying dreams of murdering people, including cops, prostitutes, and even his own models. When these people keep winding up dead (typically murdered with what is either an awl or a very sharp douche), he begins to suspect he may be having a psychotic break.

This could not have come at a worse time, because he is in the middle of a passionate love affair with Mindy Jordache (Joanna Pettet), a senior home caretaker who he met in the elevator coming out of his shrink's office, followed into the parking lot, and wouldn't allow to leave until she agreed to go on a date with him. 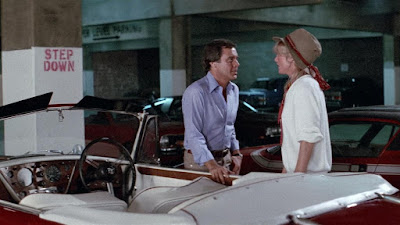 You know, a normal meet-cute!

I suppose since we're already talking about it, let's call it out: Double Exposure is dripping in misogyny. It's not like the slasher genre's habit of having films where strippers and prostitutes are murdered is giving us a solid foundation to start from. But not only does every single female character take her top off with almost every one of them summarily being murdered afterward, every frame of the film is packed to the edges with toxic masculinity as well, just as an added bonus.

The treatment of the lead character as some kind of bizarre middle-aged lothario who women find irresistible actually made me pause the movie to look up if the writer-director also starred, because it seems like the kind of wish-fulfillment fantasy that a lot of these wannabe auteur filmmakers imbue within their movies.

Let's put aside the scenes where Mindy gazes longingly at Adrian while he mansplains football to her, or the scenes of B.J. feeling up every woman who comes within four hectares of him, which ends up leading him to the love of his life. Just listen to this scenario: Adrian boxes Mindy's car in until she agrees to go on a date, which he then shows up late to, invites her to enter his motorhome, and takes her to a deserted parking lot to drink. Which she gleefully does, and leads her to falling head over heels with him. This is not a normal human woman, folks.

Weirdly, Double Exposure has a gay character who is fully self-actualized, good at his job, doesn't have AIDS, and is neither murdered nor revealed to be the killer. So that's nice. Though of course he is on the receiving end of constant verbal abuse.

All that aside (and it's a lot to put aside, I acknowledge), Double Exposure is actually pretty well made. There are a few honking technical missteps (like the fascinatingly ugly blur effect put on Adrian's entire first scene that makes everything look like it's taking place in the "Take On Me" music video, which I am desperately happy does not get used at any other point), but it's generally slick to look at and sometimes even pretty. OK, once: the discovering of a dumped body, which is elegantly arranged on a hillock like a centerfold model.

And the score is certainly interesting, more layered than the typical Halloween riff we get in movies like this. Between lush strings and bombastic brass speckled with peppy blasts from a tuba, we get a kind of anti-instrument that sounds like metal blocks crashing into each other. It's propulsive and exciting, and way better than any scene in the film deserves.

Although it's not like the kills here are lacking. There's not a lot of blood to speak of, but they're packed with surprisingly brutal detail (in particular the gurgling breath drawn from a slit throat is not something I'm likely to forget anytime soon), and sometimes provide a burst of wacky fun (the one where a lady has her head shoved into a garbage bag with a rattlesnake in it, which is more reminiscent of The Office than anything).

All in all, Double Exposure is far less than the sum of its parts, because each part has to be slathered in some of the worst gender politics of a genre that doesn't ever traffic in good ones. And also the scenes where we're really supposed to dig our teeth into Adrian's psyche are just scattered and confusing, over-edited into utter oblivion. But if you want a sleazy movie that sometimes tips into the most undeservedly saccharine romantic montages this side of Silent Rage, this one is not entirely a miss.

Killer: B.J. Wilde (James Stacy)
Final Girl: Mindy Jordache (Joanna Pettet), I guess
Best Kill: The opening kill, which has shades of Friday the 13th, with the awl piercing through the back of an undercover cop's neck.
Sign of the Times: The movie is literally named after a photography process involving film.
Scariest Moment: Literally any time the Wilde brothers interact with a woman.
Weirdest Moment: At the end of a scene that has very little to do with the bartender, a random lady shows up to demand an alimony check from him before it cuts away.
Champion Dialogue: "I find carrying equipment to be very sensual."
Body Count: 7

TL;DR: Double Exposure is a fairly decent entry in a slasher subgenre I really want nothing to do with.
Rating: 5/10
Word Count: 1127