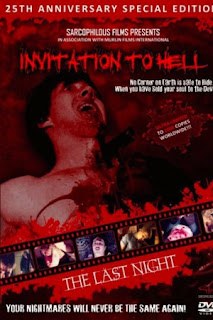 Year: 1983
Director: Michael J. Murphy
Cast: Steven Longhurst, Catherine Rowlands, David Bruhl
Run Time: 50 minutes
The thing about this Census Bloodbath project is that when you get into the nitty gritty of the most obscure slashers, there isn't always a lot of information about what the hell they are. Take the 50 minute British production The Last Night which doesn't even have it's own poster (the only indication that it was ever released is the above DVD artwork pairing it with the same director's ever-so-slightly better known feature Invitation to Hell.
Director Michael J. Murphy's later Census Bloodbath film Bloodstream (which shares so many cast members with The Last Night that I won't bother to notate it when crediting them) seems to have received a limited theatrical release, but I can't imagine a world where this one did. One can presume from its run time that it was a direct-to-VHS effort, if not a direct-to-mom's-closet effort, but beyond that its origins remain a mystery to me. But the fact remains that it's a movie that I watched, so let's dive in! 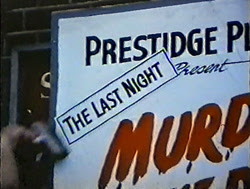 So far, so good.
The Last Night takes place on, of all things, the last night of the play "Murder in the Dark," put on by a local theatre troupe. It's also lead actress Helen's (Catherine Rowlands) 25th birthday, so the crew is planning a combo wrap party/surprise birthday party for her after the show. The rest of the cast and crew dissolve into a bland, undifferentiated mass, but the one's that stood out to me were Sue (Lindsey Greer), the hardworking stage manager, and the producer Dave (Clifford Gardiner), who is like a more camp Ian McKellen.
Escaped criminals Mike (Steven Longhurst) and Gary (Colin Efford) (who seem to be playing into the public's fear of hooligan youths and as such are surprisingly attractive for slasher movie villains) arrive at the theater with the intention of hiding out in the attic while the theater is empty for the next several weeks. Unfortunately, they are quickly discovered by a canoodling couple and are forced to kill them, then hold the entire production hostage, threatening to kill any actor who disrupts the play or tries to escape, hoping to prevent the audience from knowing anything is awry. 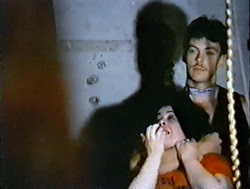 And they kill almost everyone involved in the play. It's the perfect crime [sic]!
As far as stage-set slashers go, The Last Night is more on par with Nightmares than StageFright: Aquarius, especially when it comes to the aesthetic. A good transfer of this film doesn't exist, I imagine, but even presented in 4K high-def quality, it would still look overlit and underbaked. There's not a single shot in this movie that expresses any intention other than presenting the proceedings of the plot in the middle of the frame.
However, The Last Night is not without it charms. It is an amateur production to be sure, but in such a way that it genuinely feels like a local theatre troupe decided to put on a slasher movie. They didn't have any idea how to do that, but they're clearly having fun pushing the envelope (even when they push it too far, in some of the more outrageously horny moments). Their bond is apparent, and without the veneer of film quality to get in the way, we the audience are allowed in on the joke.
The entire thing is infused with this playful energy, most of it in the unintentional stiffness of certain moments, but quite a few scenes deliver a dry British sensibility that is genuinely amusing. The moment where the killers are arguing about a bottle of wine while in the middle of murdering someone is certainly a prime example. And that's not the only element that succeeds in being good on purpose. The score is at least up to something interesting, with a non-diegetic cymbal crash accompanying some of the more impactful moments.
Lying somewhere between intentional and not is the fact that the killers are constantly in flux between completely shirtless and 50% shirtless, but never less. It is my duty to track such things for you, and I serve you with pride.
I've been nice for quite a few paragraphs in a row, so let's get back to the matter at hand. The Last Night is still a shitty movie, any way you slice it.
Its good qualities are just a palliative for someone like me who is so far in the weeds they're grasping at any straw they can find. The kills certainly aren't inspired (though there is an arterial spray in a throat slitting sequence that's better than most films of this caliber), and switching from a slasher mode to a hostage mode in the second act is a tremendously bad idea. That decision gums up the spokes of the slasher formula right when it's supposed to be getting into gear, and relies far too much on this troupe of actors to sell tension when they can't even sell "human."
When you get right down to it, I wouldn't recommend this movie to anyone. There's nothing this film does that hasn't been done better elsewhere. If you want theatrical murder, StageFright is still the only way to go. If you want a sickly ironic birthday party, just watch Happy Birthday to Me. If you want a cute shirtless (naked, even) killer, 10 to Midnight is sitting right there, and you don't even have to leave 1983. I didn't hate spending time with The Last Night, but it doesn't do anything to justify its existence. And between you and me, if not for the evidence that I watched it, I'm not fully convinced it ever existed in the first place.
Killer: Mike (Steven Longhurst) and Gary (Colin Efford)
Final Girl: Helen (Catherine Rowlands)
Best Kill: Sue is kept in a headlock backstage and eventually chokes to death on Gary's bulging bicep, which all in all doesn't seem like a terrible way to go.
Sign of the Times: The song playing at the party at the end is the kind of new wave Britpop that is so ridiculously camp, it never made its way across the pond.
Scariest Moment: Mike forces Jill to change and watches her while she does it.
Weirdest Moment: The lady who is prepping the surprise party, who has been entirely sober the whole time, is all of a sudden drunk as a skunk and wanders in, humming a little tune to herself and stumbling down the aisle.
Champion Dialogue: "When you've killed once, it's quite simple a second time."
Body Count: 10; a quite reasonable average of one every five minutes.
TL;DR: The Last Night is certainly nobody's idea of "good," but it has a certain low rent charm to it.
Rating: 4/10
Word Count: 1187
Also sprach Brennan at 10:50 AM