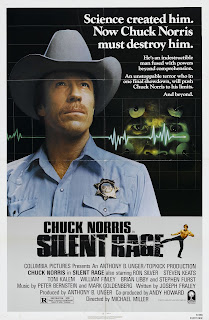 One fun thing about this project is nailing down what exactly qualifies a film as a "slasher." I know certain people will (and certain people have) disagree with some of the films I've covered being included in the project. But there's hardly a corner of 80's cinema that wasn't touched by the slasher genre's tropes. I've already made my argument for The Terminator (which won't be included here, but totally would fit right in), but during the decade we saw haunted house movies picking people off one by one, Hitchcockian thrillers shoving in body count kills, and plenty of action pictures shoving their burly stars into standoffs with knife-wielding psychos.

Today we're exploring the latter, with a deeply weird Chuck Norris picture called Silent Rage. It was directed by the man who made the execrable National Lampoon's Class Reunion, which filled me with dread. But it's also the first time I've ever seen a Chuck Norris project, so I wasn't not excited. 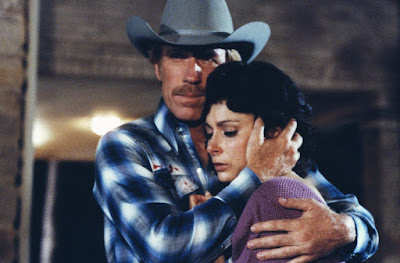 I know that's a weird admission for somebody as mired in 80's pop culture as me, but what can I say? He never made the effort to reach out.

As if you need a plot summary beyond that super wordy tagline on the poster, here's a quick rundown. Dan Stevens (Chuck Norris, and I wonder if the actor Dan Stevens' parents were huge fans) is the sheriff of a small town. So small there's only about four locations in it! When he and his bumbling, alleged comic relief partner Charlie (Stephen Furst, also of Class Reunion) are called to the scene of a double homicide, they end up in a shootout with the perpetrator John Kirby (Brian Libby). His corpse is taken to The Institute, the local experimental hospital where he has been watched over by psychologist Dr. Tom Halman (Ron Silver). In the process Dan is reunited with his ex, Dr. Halman's sister Alison (Toni Kalem). She is incredibly angry at him over their breakup five years ago so she immediately gets back into bed with him, because she's a woman in an 80's action movie.

Meanwhile Halman's boss/mad scientist Dr. Philip Spires (Steven Keats) is testing a serum that makes people like, super strong, and able to regenerate dead tissue. Of course he wants to use it on the unstable Kirby, because a braindead corpse doesn't just land in your lap every day. So Kirby of course embarks upon a killing rampage in the four aforementioned locations and Chuck Norris must stop him. Badda bing badda boom, this movie is 104 minutes for some reason. 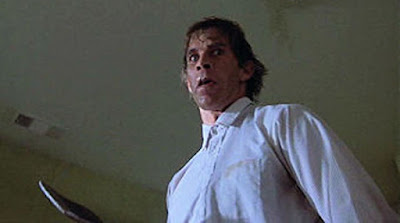 We needed to give him room to sweat in as many scenes as possible.

Not since the opening scenes of Commando (where Arnold Schwarzennger has ice cream with Alyssa Milano) have I seen a more unsettling, supposedly sweet montage that looks like the man could snap the other person's neck at any moment. Chuck Norris has a "rekindled love" sequence with Toni Kalem that's creepy beyond the massive ten year age difference, involving them swinging wildly back and forth on a hammock, him rescuing her from a tree, and generally just shirtlessly glowering at her like a blonde boulder. Incidentally, it's scored to a cheesy pop song performed by Married with Children's Katey Sagal, so this is a skeleton in the closet of even more people than you thought!

Also, consider the fact that Norris racks up a higher body count than the actual killer, when he single-handedly takes on an entire biker gang in a bizarre interlude that eats up fifteen minutes of the film across two scenes and has literally zero bearing on the plot. It does, however, provide some pretty delightful fight choreography. Heads are cracked, chairs are smashed, and a motorcycle goes flying through a goddamn window! It's a shot of adrenaline directly into the cornea. 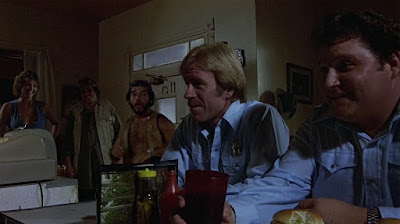 Also, from the way the gang talks and behaves, I'm pretty sure up until the moment of shooting, the script read "pirates" before it was hastily crossed out and replaced with "bikers."

This scene feels spliced in from a different film, and not just because it's an absolute footnote in the plot. It's because it's the only sequence that actually features good fight choreography. Every other time Chuck Norris is called into action, every character is clearly waiting their turn to softly strike the other, completely unaccompanied by any sort of music. It's like watching rehearsal footage.

As for the slasher elements, they're not in top shape, but definitely not the worst I've seen in these here parts recently. The main kills (as in, the ones involving named characters rather than unnamed extras mowed down in the third act rampage) are more action-centric, focusing on the chase and the process of the killer wearing his victims out and outsmarting them, rather than delivering great gore gags. Which is a good move, because Silent Rage doesn't have many of those to offer.

What it does have, however, is surprisingly solid camerawork. Michael Miller really got his money's worth out of his Steadicam, because we're constantly swooping and gliding through our environment, slinking around the action with an eerie grace. This is at its best in the terrific opening scene, which is mostly delivered in one shot. We see a pre-serum John Kirby struggling not to let his inner demons become axe-wielding outer demons, all while three children scream and play in the lobby of his living space. The combined noises of their toy guns, their shrill cries, and their mother screeching at them to shut up reach Babadookian levels of unbearable, and really draw you in to his inevitable mental collapse. It's thrilling, frightening, and leaves you in suspense as to who exactly will receive their violent end at his hands. It's honestly nearly perfect, until the film shows its hand with an over-delicate swing of a prop axe that elicits the softest whisper of a "goosh" from the man it becomes embedded in.

Unfortunately, beyond that scene, when Brian Libby is asked to fill the role of "wordless pyscho killer," he loses any sense of personality and completely relaxes his grip on the character, becoming a complete blank. 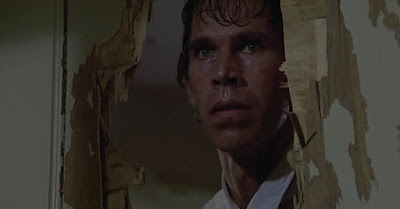 It's maybe telling that the best the movie has to offer is already out of the way before Chuck Norris even shows up. He's saddled with a boring, stoic character that doesn't even learn about his antagonist's regenerative capabilities until about ten minutes before the film ends. His empty masculine posturing fails to fill a film that is more focused on pumping you full of dread rather than testosterone. Whereas I started to be rather fond of Dr. Halman and his wife Nancy, who share probably ninety seconds of screen time together, I never got a bead on Dan Stevens or what he wanted after an entire film of being shackled to his perspective.

I'd say that overall, in spite of its flaws, the movie is at least amusing enough as a time capsule of the bizarre, contradictory impulses of cinema in 1982. So perhaps it succeeds only in spite of itself, but it's still a success in my book!

Killer: John Kirby (Brian Libby)
Final Girl: I guess Allison (Toni Kalem), but you know it's actually Chuck Norris
Best Kill: The sheer drama that fails to successfully play out while Charlie is being bear hugged until his spine snaps is pretty hilarious.
Sign of the Times: Chuck Norris!
Scariest Moment: Allison discovers her brother's grey, bloodless body hanging on the back of a door. 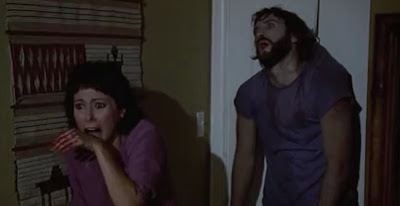 Weirdest Moment: In a random interlude, Charlie tells a story about when he was six years old and tried to dry off his wet dog in the freezer, with horrifying results.
Champion Dialogue: "Whatever happened between us six years ago is water under the dam or over the bridge."
Body Count: 9; not including a man we see running down a hallway chased by the killer, who is presumably long dead by the time the credits roll.
TL;DR: Silent Rage is a very silly 80's action-horror hybrid, which does put me on its good side.
Rating: 6/10
Word Count: 1494
Also sprach Brennan at 7:37 AM