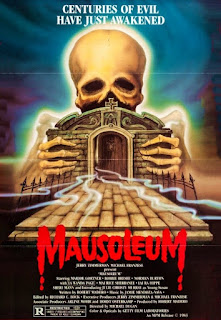 The 1983 paranormal slasher Mausoleum was, according to legend, financed by the mob as a money laundering scheme. This isn't as uncommon as you might think, and it doesn't even necessarily spell doom for a production. Christmas Evil and The Texas Chain Saw Massacre were both financed by the mob and I couldn't think of a wider gulf in quality between two films. If nothing else, it gave an early gig to effects whiz and Friday the 13th Part VII director John Carl Buechler, so it wouldn't be a waste even if the entire film was a lit with a single penlight. 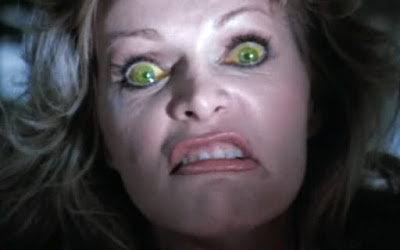 It wouldn't be the first slasher I've seen lit that way.

Alright, so the plot! Insofar as there is one. Susan Farrell (Bobbie Bresee) is born into a cursed family. The Nomed clan was cursed in the 1600's to have their firstborn daughter possessed by the demon who lives in the local mausoleum, and apparently in the intervening 300-odd years never thought to move. And also apparently the mausoleum has always been there and America was just built around it.

Anyway, the demon has chosen to possess her at age 30 for no apparent reason, and is turning her into a sexy vixen who seduces gardeners and delivery boys of all stripes before murdering them with her telekinetic demon powers, to the dismay of her husband Oliver (Marjoe Gortner) and longtime psychiatrist Dr. Simon Andrews (Norman Burton who you will recognize as Eric Binford's boss from Fade to Black, though he also played Felix Leiter in a small indie titled Diamonds Are Forever). And that's pretty much it! 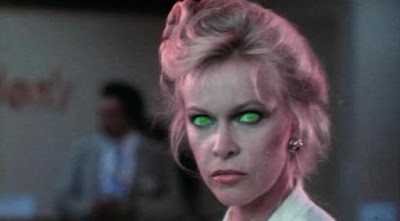 Oh, also when she kills people her eyes turn green and space laser sounds play. And that's the movie!

What makes Mausoleum interesting is that it's really not that interesting. Filmmakers have combined the slasher and possession genres before to mixed results. For every Killer Party and Hello Mary Lou: Prom Night II, there's a... actually, I've got nothing, they're all awesome. It's such a weird swing from the start that the films have almost no choice but to be a bonkers good time. And it's not that Mausoleum is not that, it's just that it can't quite build a framework worth mounting all the gooey 80's nonsense on.

It's not like I come to the 80's slasher well for deep, trenchant character studies, but at least most of the time we get characters like "child psychology major who can work a pitchfork" or "girl who really likes sex and wears granny panties." You know, characters you can really sink your teeth into! Mausoleum makes it very clear that Susan is evil and possessed from the start, so it kind of forgets to make her have any sort of struggle with the evil burgeoning inside her. And the people she murders mostly crop up in one or two scenes before they're offed. The only characters she has any meaningful interactions with are her husband and doctor, who are two of the blandest nobodies who ever nobodied. So Mausoleum is a narrative that follows no one, which leaves it feeling more than a little aimless.

And while the demon/kill effects are fun, the scenes are paced with all the pep and zip of a funeral procession. Typically we hold on Susan's glowing eyes for 20 seconds, then cut to nothing happening, then back to Susan for another riveting 20, then back to nothing happening, then another 15 or 20 of Susan for flavor (maybe this time she's flexing her face like she's watching a "Cheekbones of Steel" exercise tape), then something cool happens. And quite literally nothing of note happens in the final 15 minute confrontation with the demon itself, which takes place in at least two different locations that three different characters shuffle their way between. 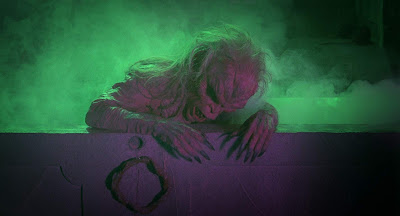 But those effects though! They're certainly not the best that the 80's or even John Carl Buechler had to offer, but they're certainly better than they have any right to be in a film this transparently interested in showing a sexy lady wandering around rather than frightening an audience. They've got that textured, wrinkly, tactile feel that Buechler always imbued into his work, and there's a hell of a lot of them. Typically a low budget demonic film will save all its effects budget for the grand finale, but we're catching glimpses of Susan's gargoyle-esque demon face from the word "go," and while the kills aren't all that unique, they're well-rendered and know that we've come to see gross shit happen to mean people.

Actually, technically speaking, most of the film displays more skill than you might think. The score is orchestral and lush, and the generic scene of whispered voices calling out to Susan is presented in a churchlike harmonic vocal that is actually quite beautiful to experience. And the lighting and cinematography certainly have their moments, most notably in an early scene where the demon's shadow looms over young Susan, but also giving surprisingly classy grace notes to the kills like a shattering wine glass, or a dropped sheaf of papers fluttering in slow motion through the air.

Really the only true failure here is the screenplay (which also includes one of the most egregious Token Black Comic Relief Characters in a decade that wasn't exactly experiencing a deficit of those). And maybe the acting, but it's not like having Meryl Streep or Jack Nicholson in here could have brought this bland screenplay to life. Also, I maybe have a bone to pick with the production design, which quietly posits that Oliver and Susan are maybe the richest people on the planet because their lavish three-story modern home makes the Guggenheim look like a particularly spicy public restroom.

But it all comes out in the wash. At the end of the day, I enjoyed the time I spent with Mausoleum, even if it wasn't quite the hidden gem I wanted it to be.

Killer: Nomed
Final Girl: Susan Walker Farrell (Bobbie Bresee)
Best Kill: An art dealer in a mall is levitated out into the open air pavilion and gloriously impaled on a particularly stylish fountain. 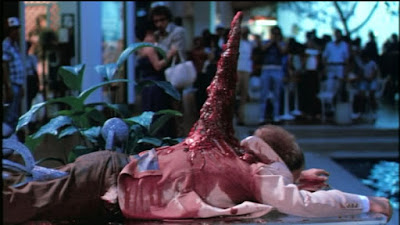 Sign of the Times: The dance club Oliver and Susan go to reeks of cigarette smoke and white people disco.
Scariest Moment: Even though Oliver fully knows his wife is possessed by a demon, he still has her cook and clean for him, no problem. Because the patriarchy!
Weirdest Moment: When devising a grocery list, neither Susan nor her maid can spell "guava" so they decide to get cantaloupe instead. As if that's easier to spell.
Champion Dialogue: "I'm not in the habit of seeing my patients light up."
Body Count: 7

TL;DR: Mausoleum is amusing enough, but its languorous pace and lack of interesting characters make it a blander affair than it has any reason to be.
Rating: 6/10
Word Count: 1239

Also sprach Brennan at 7:49 AM