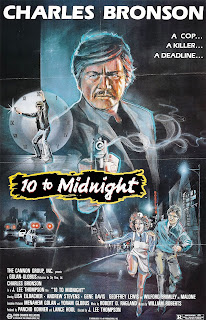 In the mid-80's, the slasher genre had ensconced itself so securely in the cinema firmament that just about every genre had to get in on the fun and throw a knife-wielding maniac into the mix. An early adopter of this practice was another genre that was pumping out movies like there was no tomorrow: action. We'd already seen a genetically modified maniac thriller grafted onto a Chuck Norris "romantic" actioner with Silent Rage in 1982, but you know a trend has legs when The Cannon Group tosses their hat into the ring.

The iconic shlock production company, then under the loving care of producers Golan and Globus, had already produced a half dozen slashers by the time 10 to Midnight came out in 1983, but this would be the first time they mixed their action peanut butter with their horror chocolate. They paired a fresh-off-Death Wish 2 Charles Bronson with Happy Birthday to Me director J. Lee Thompson and hoped they could make magic. 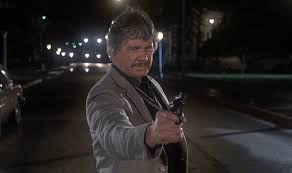 Sorry, that was a typo. Money. They hoped they could make money.

Where should I even begin? I suppose with Charles Bronson, who's as close to a protagonist as this movie gets, even though he's offscreen as much as humanly possible. He plays one Leo Kessler, a hard-nosed cop who is irritated by his new erudite yuppie partner Paul McAnn (Andrew Stevens, who had his turn as a stalker killer in the execrable The Seduction). You can probably guess where this is going, and you would be wrong, because if they made this a buddy cop movie, they'd have to get Bronson out of his trailer.

We also get the privilege of following the exploits of Warren Stacy (Gene Davis, of The Hitcher and Cruising, so his homoerotic cinema bingo card is pretty complete), an absolute creepo incel who aggressively flirts with women and flies into a murderous knife-happy rage when they quite reasonably reject him. He has now set his sights on Laurie Kessler (Lisa Eilbacher), who has the supreme misfortune of being the progeny of Leo. Paul and her develop a little bit of a flirtation because it's not an 80's action movie if a cop isn't overstepping ethical boundaries with a case. Now we have all the pieces in place, watch them run around! Oh, and when Warren is killing people, he walks around completely naked. 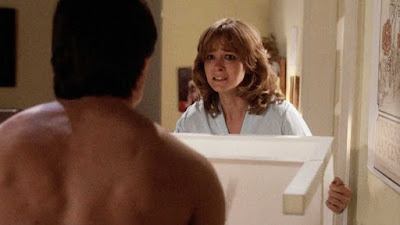 Oops, did I forget to mention?

10 to Midnight is an odd duck. If you take a step back and look at the thing, it's really not successful as either a slasher or an action film. On the one hand, you have a series of kills that are largely concentrated in the beginning and ending (the second act has a pace that is murderous, and not in the good way) and all follow the same M.O.: A little bit of stalkin', a lot of stabbin', and home before dinner gets cold. On the other, you have an action film that doesn't depict much action. The cops walk around and ask people questions and file reports, but they hardly break a sweat. You'd hardly even know it was trying to be an action flick if not for the parts where the cop who plants evidence and wants to act outside the law is meant to be the hero of the movie.

And though Charles Bronson could hardly be blamed for not giving this particular project much respect, he's not phoning in his performance. He's telegramming it. What we're seeing onscreen isn't Bronson in any meaningful sense of the word. It's the flesh his consciousness usually occupies, but the true Bronson is somewhere sunny and warm where he doesn't have to recite dialogue at a naked man. Every line is delivered in a flat monotone, except for the ones where he randomly injects some excitement by emphasizing the wrong syllables ("he was on mor-PHINE").

And yet, despite being an abject failure on paper, why is 10 to Midnight so goddamn fun? 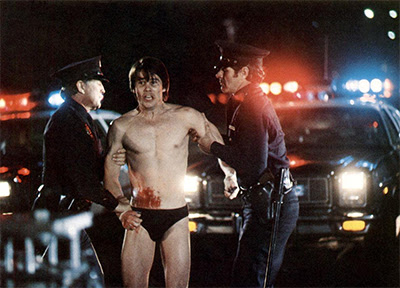 Don't look at me like that.
What it lacks in, well, almost everything, 10 to Midnight makes up for with a healthy portion of 80's sleaze and cheese. This is a film that is unembarrassed to plumb all the weirdest corners and most clandestine impulses of the brain of screenwriter William Roberts (the creator of The Donna Reed Show, somehow). This is a film that asks a disaffected Bronson to complain about how much he hates quiche one moment, then scream at a young man about jerking off the next.
The film can't find its identity in a genre, so it just commits to being whatever the hell it wants to be in this particular second, existing in an effervescent, eternal Now. This Now also happens to be 1983, so we get a heady synth score while all this is happening, and you know I'm never gonna complain about that. And maybe I finally get why all those straight teenage boys went to see the shittiest slashers in droves, because sending a naked Gene Davis to wander around a third of your movie is certainly a way to capture my attention (this film is obsessed with nudity from any gender, so it's nice and equitable although it's just skittish enough to never go full frontal on Davis - in this moment I can't quite recall if there is female full frontal, but there may well have been some while I was distracted).
At the end of the day, I have watched many many many slashers that are worse than 10 to Midnight, though that's probably more of a slight toward myself than it is praise for the film. With the exception of that dreary middle 30 minutes where it makes feint toward being a legal thriller that it graciously doesn't commit to, it's easy to be entertained here (I almost forgot to mention the banter between Laurie and Paul, which is warm and sweet, if inexplicable). What the hell, I say check it out! Maybe?
Killer: Warren Stacy (Gene Davis)
Final Girl: Laurie Kessler (Lisa Eilbacher)
Best Kill: They're all pretty much the same M.O., but there's a fun gag at the end of Betty's roommate's death where the toast she was making pops up out of the toaster at the second she expires.
Sign of the Times: Laurie's "going out" outfit involves a one-molecule-wide headband that couldn't possibly be doing anything meaningful to her hair, so it must be for fashion.
Scariest Moment: When Warren is trying to break through Laurie's bedroom door, the mirror on the other side shatters.
Weirdest Moment: Charles Bronson confronts Warren with a sex toy discovered in his bathroom, which resembles the snout of the "Mahna Mahna" muppet crudely grafted onto a salad spinner hair dryer.

Champion Dialogue: "Don't do anything I couldn't do better."
Body Count: 7
TL;DR: 10 to Midnight is a bizarre slasher-actioner hybrid that is well served by an exceptionally sleazy presentation.
Rating: 7/10
Word Count: 1213
Also sprach Brennan at 7:48 AM