Census Bloodbath: A Pleasure To Have In Class 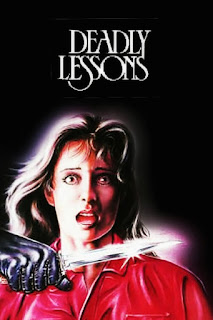 You know a couple things ahead of time when you head into a TV movie slasher. You know there's going to be a bunch of random TV actors assembled for the honor of dying in order from least to most famous (the absolute most famous either don't die at all because they're just a cameo for one day of filming, or they're the killer. Or both.) And you know the kills aren't going to be what you're used to, given network censorship against violence, especially at that time. Although, given the way the MPAA was cracking down on the genre in theaters by this point in the 80's, there's hardly any difference.

So I always try to keep an open mind when approaching one of these things, and Deadly Lessons, which originally premiered on ABC, had a couple aces up its sleeve that I was keen to check out. First, it comes from director William Wiard of Fantasies, which was the best TV movie slasher of 1982 (yes, there were several. You couldn't escape the slasher film on any medium in the 80's, including NES games and 900 numbers). And it was written by a woman, in this case prolific TV movie and miniseries writer Jennifer Miller. Any time a slasher even glances in the direction of having anyone behind the scenes be female, it's worth paying extra attention. 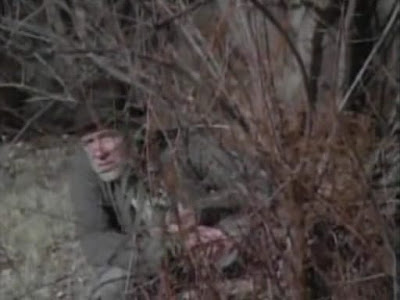 Even when that movie is unwatchable like A Night to Dismember, which also came out in 1983.

So our story begins with young Stefanie Aggiston (Diane Franklin of Amityville II: The Possession) getting a scholarship to go to the prestigious rich girls' boarding school Starkwater Hall. It takes a while for her to fit in with the upper crust brats over summer session, but right when she starts feeling comfortable, someone starts murdering the girls one by one. Enter Detective Russ Kemper (Larry Wilcox of CHiPS!), hellbent on discovering the identity of the murderer. But can Stefanie, fueled by her Nancy Drew moxie and obsession with the Clue-esque board game Evidence! beat him to the punch? 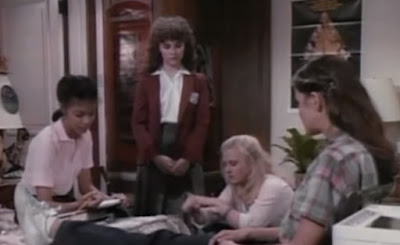 And the review hasn't even started yet! You ready?

I've already mentioned that we knew going in the kills weren't going to be remarkable, but they're actually even more demure than in Fantasies. There was never going to be any blood dripping around the place, but here we exclusively get either cutaway gags or people discovering the body after the fact. Luckily the filmmakers made the smart move of having the victims be strangled or drowned, so they can at least show the bodies without too much fretting. We're at least aware we're making a slasher movie here.

But what Deadly Lessons can't deliver in gruesome murders, it does in heaps of playful whodunit mayhem. The parlor room sequences abound here, as the plot thickens and two factions of sleuths race to the finish. There's a little too much cop nonsense in the movie, which you know I don't like (they needed as many scenes for Larry Wilcox as possible), but any moment where Stephanie and her Babysitters Club gaggle of Sherlocks are trying to get to the bottom of things is a delight. Unfortunately the Encyclopedia Brown sleuthing (there's a lot of material mined from whether or not people's boots are covered in mud) doesn't get us all the way to the finale, which kind of chucks murder mystery mechanics in exchange for a Big Grand Villanous Motive Explanation Speech. But it was fun while it lasted.

And even though there isn't a murder setpiece around every corner, Deadly Lessons does its best to deliver overheated melodrama action as often as possible, including hay bales falling to crush Stephanie out of nowhere, and a bucking bronco triggered by an electric shocking gadget beneath the saddle. These are the moments where the thrills come, and while they're certainly not actually thrilling, they're deliciously cheesy in the way of all the best old school TV movies. 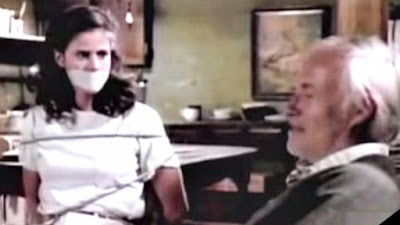 You must remember, this is back before all TV was movies.

And probably the biggest accomplishment of Deadly Lessons is making such a huge cast of characters seem unique and compelling in their own right. Sure, there are a couple of the tertiary characters I could never quite get straight, but on a whole the morass of identically clad schoolgirls is actually quite easy to parse through, thanks to a set of distinct performances that capture each girl's personality and her dynamic with the rest of the group.

The cherry on top is Donna Reed parading around as the frigid grand dame to rule them all, playing off of several saucy love triangles. Sure, it could have been better if it was a theatrical movie with the guts to include more guts. But within the narrow realm of what it is, Deadly Lessons is nothing short of a delight. I certainly wish William Wiard had continued to work in the slasher industry, because I could use a couple more sparkling gems like this to unearth coming down the line.

Killer: Det. Russ Kemper (Larry Wilcox)
Final Girl: Stefanie Aggiston (Diane Franklin)
Best Kill: There aren't any kills onscreen, but I'll say the death of mean girl Tember is the best because it's surprisingly early and means we don't have to deal with her for the rest of the movie.
Sign of the Times: You know this is pre-1985 because Ally Sheedy doesn't have the lead role.
Scariest Moment: The Obvious Red Herring Groundskeeper goes absolutely bananapants and kidnaps Ally Sheedy to tie her up and tell her all about how much he loved her mom.
Weirdest Moment: See above.
Champion Dialogue: "Who could be so barfy?"
Body Count: 3; though there is a fourth pre-Final Girl attack sequence where the victim just happens to survive.

TL;DR: Deadly Lessons is limited as a slasher by the nature of being a TV movie, but it leans into all the other things that make TV movies great.
Rating: 7/10
Word Count: 1214

Also sprach Brennan at 8:38 AM