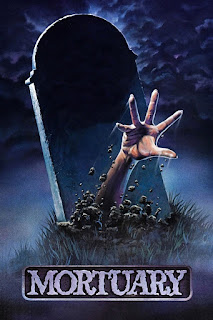 Year: 1983
Director: Howard Avedis
Cast: Mary Beth McDonough, David Wysocki, Bill Paxton
Run Time: 1 hour 33 minutes
MPAA Rating: R
It's perhaps redundant to note that the slasher genre has a bit of an obsession with death. That still doesn't help if you're in 1983 trying to decide between a screening of Mortuary or Mausoleum. Or maybe you could just stay in and rent Funeral Home. In case you're confused, we're here to talk about Mortuary, which has as checkered a pedigree as any of its funereally-minded peers. 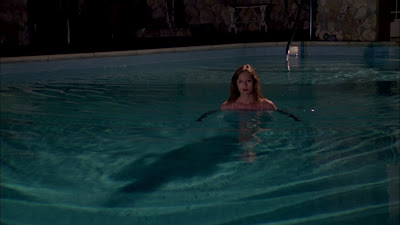 Will it rise above the pool scum of its predecessors? Time to find out.
One thing Mausoleum has above Mortuary is that it actually knows what a mausoleum is. You see, Mortuary opens with Greg (David Wysocki of Humongous) and his friend Josh (Denis Mandel) breaking into the storage area of the mortuary owned by Josh's former boss Hank Andrews (Christopher George of Graduation Day and the unforgettable Pieces), which is crammed with coffins, boxes, costumes, and fake guns, in order to steal some tires. Y'know. Mortuary tires. Anyway, they accidentally witness a cult ceremony and Josh is summarily murdered with an embalming implement, though Greg thinks he's ditched him.
Greg gets a ride home with his girlfriend Christie (Mary Beth McDonough) who agrees to shoulder the burden of being the protagonist from now on. Christie has a tough life. She witnessed her father being murdered, though everyone in town, her mother (Lynda Day George, who appeared in Pieces alongside her husband to utter the immortal "Baaaaaaaastardddddddd!") included, is content to gaslight her into thinking it was an accident. She also must fend off the advances of the creepy Paul Andrews (Bill Paxton, who we've already encountered paying his dues in the previous Census Bloodbath entry Night Warning), Hank's son who makes it very clear he has a sweaty, intense crush on her. Oh, and she's also being threatened by a killer who shows up at her house at night. 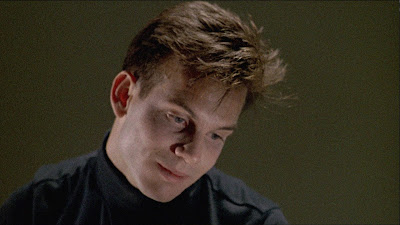 But really, the crush thing is worse.
Mortuary has a couple things going for it. First, the cast is pretty stacked with recognizable actors. Bill Paxton is recognizable to pretty much anyone, and the Georges are recognizable to Pieces freaks like me. Lynda Day George isn't as over-the-top manic as she is in that film, but her soap opera soft lighting and exquisitely made up face at any time of night lend her an ethereal quality, and her vacant performance style compounds with that to serve some real Nancy's Mom from Elm Street energy. Is that a compliment? You decide. I enjoyed it, at least.
Bill Paxton's performance is the one that most closely approximates "good," though really there's not a lot of competition. A group of three friendly teens keeps threatening to become actual characters in the movie but they demurely stay on the sidelines, making this cast max out at around 7. Paxton isn't giving a performance that makes you go "see, he had it in him, even then," but he's having fun, which is more than I can say for anybody else.
The other thing that is unequivocally good about Mortuary is the face of the killer, which turns out to be a mask (in the film's only interesting move, the Satanic ritual the boys witness is just a red herring - just your regular run-of-the-mill Satanic gathering). It's a pale, heavy-lidded face that looks unnervingly fleshlike, giving off the same uncanny energy as the demon face that occasionally flashes onscreen in The Exorcist. 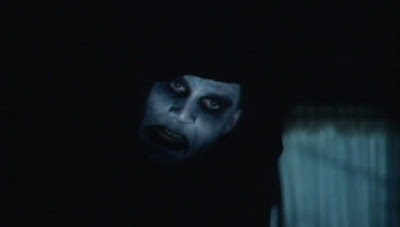 Pictured: Me after watching all 460 slasher movies on my docket.
Unfortunately, this is where anything good about Mortuary ends. It's an abject failure as a slasher, because even though it has a fairly respectable body count, the murder sequences are uniformly goreless and, in one case, so poorly shot that the murder weapon visibly doesn't make contact with the victim. Plus, the pacing is maddening. There is about a full hour where absolutely nobody gets killed, and instead we're asked to find spending time with Christie interesting.
Christie spends the entire movie processing her dad's death, rolling around in bed in the grips of a poorly acted nightmare and screaming "Daddy!" over and over again to the point that I had to turn my volume down lest my neighbors think I was watching straight porn. And maybe they would be right, because the remainder of that time, Christie wanders around her dark house in a low-cut nightgown, something that the producers presumably assured themselves would be fascinating, because their audience would always comprise nothing but straight men. 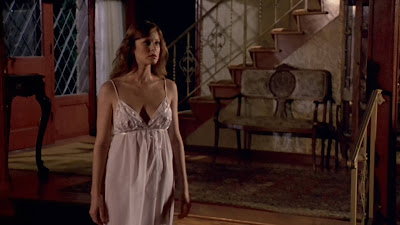 Well, surprise!
There's really no meat on these bones whatsoever. If Mortuary was just a couple degrees cheaper and chintzier, even without the gore, it might have been worth salvaging. But as it stands, it's desperately uninteresting. One scene after another plays out until it drowns in its own tedium and is replaced by an equally languorous snooze. This really is one of those films that makes you wonder why anyone bothered.
Killer: Paul Andrews (Bill Paxton)
Final Girl: Christie Parson (Mary Beth McDonough)
Best Kill: None of the kills are particularly good, but the first of several impalements with an embalming gun is at least shocking and fun. That's Josh's, by the way. Remember him? Neither do I.
Sign of the Times: We never see Greg in anything but a vigorously striped polo.
Scariest Moment: The killer corners Christie while she's swimming in the pool.
Weirdest Moment: Christie and Greg have sex on the living room floor of her mother's house when she could walk in at any moment.
Champion Dialogue: "They're communicating with the souls of the dead, and other stuff."
Body Count: 5
TL;DR: Mortuary is a film with some good elements, but they are spaced far apart between aimless scenes of nightgown-clad wandering.
Rating: 4/10
Word Count: 1012
Also sprach Brennan at 8:50 AM