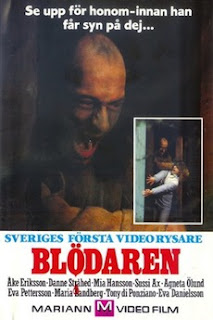 Year: 1983
Director: Hans Hatwig
Cast: Åke Eriksson, Sussi Ax, Eva Danielsson
Run Time: 1 hour 18 minutes
It's undeniable that the 80's slasher film is primarily a North American tradition. America was churning out the bulk of the chum, and Canada was batting clean-up with a lot of movies that were actually good. However, the whizzing of that money-printing machine was so loud it could be heard across oceans, and so far we've covered slashers from territories as far afield as West Germany, Australia, Hong Kong, Taiwan, Japan, Spain, Brazil, the UK, and The Netherlands. However, it's always nice when another country gets in on the fun and throws their hat in the ring. Today's subject under the microscope is Blödaren AKA The Bleeder, Sweden's first (and only? I'll keep you posted) grab for the slasher brass ring. Let's see how they fared! 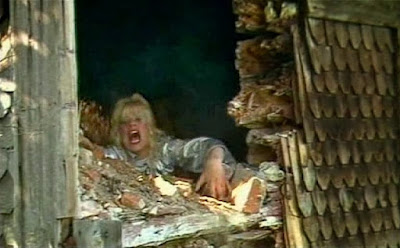 You do have to assemble the pieces yourself, unfortunately.
In Blödaren, the rock band Rock Cats (as played by the members of actual Swedish band Revansch) has finished their latest gig and is heading to their next stop in their tour van, which of course breaks down immediately. They grab their instruments and head to the nearby village of Bifors, the now-empty hometown of a boy whose family drowned 25 years ago, leaving him with brain damage from staying underwater too long. And wouldn't you know it, but this boy is now a man (Åke Eriksson, the drummer of the band Attack) dressed like a bad Chris Elliott character, and he has escaped from the local institution.
The girls (who are all blonde, and only distinguishable by their differently colored pants) wander around this abandoned village, peel off one by one, are kidnapped, and then killed. Meanwhile forest ranger Danne (Danne Stråhed), who has been investigating the abandoned van, canoes up and down the river and generally fails to get anywhere near helping any of them. 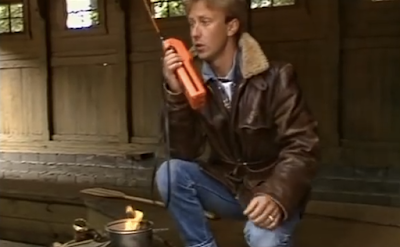 The authorities really need to learn that they have no business in a slasher movie anyway.
I'll say this one thing about Blödaren. They certainly did their horror movie homework. The music is stolen from Halloween, the squealing, dragging around of women, and bone decorating prowess of the killer is straight out of The Texas Chain Saw Massacre, and the baby carriage and bouncy ball that are his strange markers seem to randomly have been lifted from The Changeling. Look, there's nothing inherently wrong with stealing tropes from other movies. If James Wan has seen further, it is because he has stood on the shoulders of giants. You just need to deploy those tropes well. Which Blödaren doesn't do.
Yeah, did I forget to mention this movie is bone-crushingly terrible? Blödaren only has two scenes, which it repeats ad nauseam:
1) The girls explore an empty building that is covered floor to ceiling in blood, but don't get freaked out until they discover a skull somewhere in the premises, at which point they scream and run out. It's like a twisted Where's Waldo.
2) The killer kidnaps one of them, attempts to play with them, and then drags them offscreen when they attempt to escape. We hear them scream, and this means that they are dead. 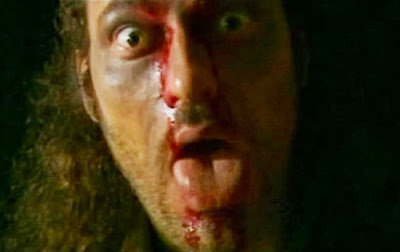 Reader, this movie has no onscreen deaths, and hardly a drop of blood to be found beyond the obligatory "this person is dead so they have to have a dribble of blood coming inexplicably from their mouth" makeup.
Usually a bad slasher featuring a rock band at least features them performing a lot of fun-bad music, but despite the rock cats carrying their instruments with them for the entire movie, the only glimpse we get of musicality is a snippet of a song from the end of their concert in the intro. Blödaren is content to be flavorless and empty for the bulk of its run time, an impulse I can't say I respect. The only thing that is pleasurable to gaze upon during the interminable Bifors sequence is the costumery on display. The girls are all kitted out in their best ridiculous mid-80's Eurofashions.
Each woman is bedecked in a cascade of fabric that will send your eye on a journey through colors and patterns previously unimaginable by the human soul, but the MVP has to be Nulle's legwarmers, which have little jingle bells sewn in that make her sound like a tambourine every time she moves. And the only genuinely terrifying moment in this horror film is when forest ranger Danne takes off his big jacket and reveals that he has been rocking a rat tail padawan braid this entire time.
OK, can I scrounge up anything else good to say about Blödaren? Well, there are some reasonably effective POV shots when some of the girls try to defend themselves with pitchforks and the like. The Swedish countryside is pretty, and I love a slasher movie that has the killer strike during daylight for a change (especially considering that, if this film is anything like its dozens of crummy contemporaries, the action in a night scene would have been essentially invisible). Oh! And there's a random blooper at the end of the credits that is surprising and made me giggle. End of list.
I always hope that when a new region generously coughs up a slasher for us to peruse, it'll give us a unique angle on the formula that you couldn't have gotten anywhere else, and Blödaren is a gargantuan disappointment in that regard. It's not even generic in a white noise-y, basically pleasant sort of way. It's more like a buzzing insect that you've heard a hundred times before, and it's annoyed you each of those hundred times.
Killer: Blödaren (Åke Eriksson)
Final Girl: Mia (Mia Hansson), or at least I'm pretty sure that's her name. We only ever hear these character's names when they're already dead and somebody else is looking for them, so nobody ever needed to look for her
Best Kill: There really isn't any. Although the best business surrounding a kill is the one where Eva uses the flash from a Polaroid camera to frighten the killer, and the next girl discovers the pictures she took of the killer scattered around the floor.
Sign of the Times: The hikers are wearing Fjällräven backpacks decades before they became trendy in the U.S.
Scariest Moment: The hikers discover a grotesque display involving a tarp and a skull (which they dutifully ignore). 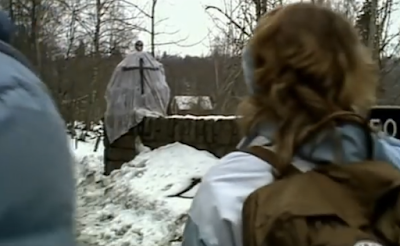 Weirdest Moment: One of the girls wakes up with the killer playing a drum right next to her.
Champion Dialogue: "I don’t care about the telephone, I want a hot dog.”
Body Count: 6
TL;DR: Blödaren is repetitive, derivative, and boring as sin.
Rating: 2/10
Word Count: 1144
Also sprach Brennan at 7:25 AM