Census Bloodbath: Digging Your Own Grave 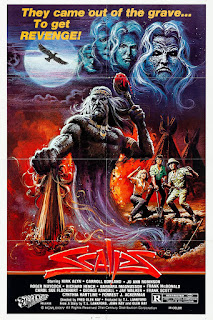 Year: 1983
Director: Fred Olen Ray
Cast: Jo-Ann Robinson, Richard Hench, Roger Maycock
Run Time: 1 hour 22 minutes
MPAA Rating: R
The slasher genre's relationship to the Native American population has been, shall we say, fraught. 1983's Sweet 16 seems at least mildly interested in exploring the relationship between white Americans and reservations, but usually we only see indigenous actors if they're here to explain whatever mystical artifact is wreaking havoc or playing the ghosts of undead "Indians" out for revenge that is never examined beyond "a non-white person wants to kill us!" á là The Ghost Dance in 1980.
The film under the microscope today is Scalps. As you can probably guess from the title and the poster (which would be an awesome fantasy novel cover if it wasn't wildly racist), it's probably one of those "Native Americans are magical and evil" entries. 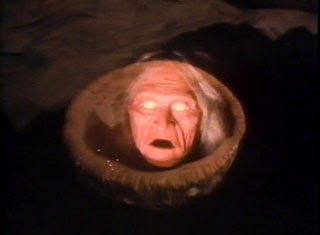 Here's a lesson: if you're looking for a light touch on the racial angle, maybe don't look to the director of Hollywood Chainsaw Hookers and Scream Queen Hot Tub Party.
Scalps follows a group of archaeology students who are traveling into the California desert to do an illegal dig on the site of a Native American massacre. What a fun, sexy time for them. The crew is formed entirely of two horny couples - Randy (Richard Hench of Slaughterhouse Rock, and who was also a swing gang crew member on Slumber Party Massacre II) the jerk jock and Louise (Carol Sue Flockhart) the spoiled brat,  Ben (Frank McDonald) the studious leader and Ellen (Barbara Magnusson) who he mostly ignores - and one potential future couple - Kershaw (Roger Maycock), who is as close to sensitive as the men get; and DJ (Jo-Ann Robinson) a new agey chick who carries around prayer sticks and has extreme doubts about the morality of what they're doing. She also has psychic visions. Two guesses who survives this movie.
They do some digging, they enrage the undead Native American spirits, Randy gets possessed by black magic shaman Black Crow, and he summarily murders the rest of them along with a coterie of zombie ghosts. I think. 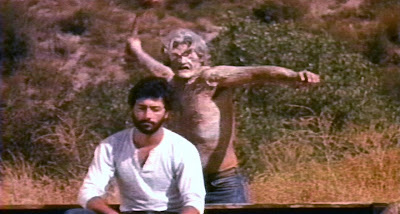 It's hard to tell if there are multiple killers or if it's just that the quality of the makeup fluctuates extremely from scene to scene.
Sometimes when a film is so outwardly problematic I get nervous that it'll actually be a pretty good slasher and I'll have to balance those conflicting feelings when I review it. Fortunately, that's not a problem here! Although there's a 15-minute stretch where Scalps starts looking like it might be fun exercise of the slasher formula, it quickly devolves into dysfunctionality. And that 15-minute stretch comes after a 10-minute prologue of incoherent dialogue, cuts that flagrantly cross the 180-degree line, and unfurnished sets that make the "university" look like a porn film's vision of an asylum. So it's not like we weren't warned about what we were in for.
Scalps is an exercise in how to fail in every department of constructing a film. There's a scene at a gas station where the passing cars drown out every bit of dialogue, and sometimes the ambient white noise of the desert gets just as deafening. And while nature-set slashers frequently have issues with visibility during night scenes (especially on bad VHS transfers), they usually don't forget what time of day it's supposed to be quite so frequently. The course of a single night takes us through pitch darkness, noonday sun, waning dusk, and an inexplicable red filter that would either imply that there's a lunar eclipse or the cinematographer was trying to get fired so they could go back to somewhere air conditioned.
Interesting story: I just looked this up, and it may have actually happened. There are two credited directors of photography, so either they were working together or one took over the other. More exciting though is the one of them is a trans woman. This is the first trans person I've ever encountered behind the scenes of an 80's slasher, and I'm very excited! Of course, trans people can produce work just as bad as cis people, but equality is only equal when we can all fail upward!! 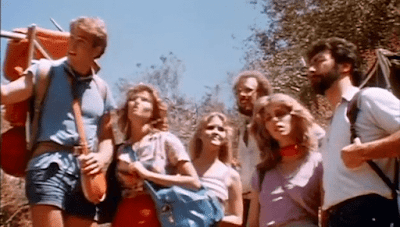 We all have to start somewhere!
Additionally, the script is a shambles, not that we expect anything different from any film in this project. DJ mainly just sits there during the excruciating 50-minute slomo-padded stretch before the body count begins in earnest, announcing that terrible things are about to happen any minute! And when those terrible things actually start happening, they begin with an unnecessary rape scene, which is always an express route to my bad side.
The kills themselves aren't especially terrible, other than the use of stereotypical Native American implements underscored by tribal drums. The 80's really were a deliriously unconscientious time, weren't they? There's a genuinely good arterial spray in a throat slashing, which stands out in a year where slashers were mostly content to insist that knives just draw a red line on your throat and then you die. There's also a scalping, of course, though that's actually not a major focus of the movie (and a good thing too, because Maniac is already sitting right there with the most realistic, horrifying scalping scene in existence, and nobody can compete with that).
Of course, the movie needs to remind you that it's not very good, so it closes on a kill that is literally just a man sticking an arrow between his fingers and holding it up to his own eye like a child playacting a Western. So there you have it, folks! Other than the big thing, there's a lot of little things that make Scalps impossible to recommend. On to the next one!
Killer: Randy as possessed by Black Claw (Richard Hench)
Final Girl: DJ (Jo-Ann Robinson)
Best Kill: When Kershaw is decapitated, his head goes flying and knocks over a chair, which is kind of hilarious.
Sign of the Times: We're still just out here calling Native Americans "Indians."
Scariest Moment: When the killings are about to begin, an excavated clay bowl begins to fill with blood.
Weirdest Moment: There's a man with a lion head who we keep cutting to even though he literally does nothing.
Champion Dialogue: "If you love me, you'll dig."
Body Count: 7
TL;DR: Scalps is racist, but it also lacks any of the fundamentals required to be a movie.
Rating: 3/10
Word Count: 1126
Also sprach Brennan at 7:50 AM