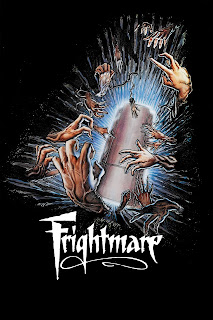 Year: 1983
Director: Norman Thaddeus Vane
Cast: Ferdy Mayne, Luca Bercovici, Nita Talbot
Run Time: 1 hour 26 minutes
MPAA Rating: R
You wanna know something that's scarier than any horror film? Seeing the Troma logo at the beginning of a movie. To be fair, that was less of a death knell in the 80's than it would be in the proceeding decades, but the fact remains that the bulk of their output ranges from rancid garbage at the bottom to passable crap at the top. My top 5 Troma movies would include Splatter University and Graduation Day, which should really tell you something. 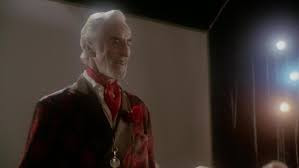 There's a place for Troma, for sure, it's just that that place is not on my Blu-Ray shelf.

So what has Troma dragged past our doorstep this week? Good news! It's passable crap! Frightmare AKA The Horror Star follows the final days of Vincent Price-esque aging B-movie star Conrad Radzoff (Ferdy Mayne). On his way out, he murders a couple directors who have gotten on his nerves, but the fun doesn't truly begin until after the funeral. His mausoleum is robbed by the young folks at the local community college's Horror Film Society, which somehow has the funding to live in a giant Gothic mansion off campus. They spend the night partying with the corpse Weekend at Bernie's style and being generally terrible, until Conrad's widow uses a medium to resurrect his corpse, at which moment he exacts gruesome revenge. The missing corpse is also being investigated by a Detective (Chuck Mitchell of Don't Answer the Phone, but he's better known for playing the title character in Porky's) who moves the plot in exactly zero ways.

Even by the standards of the slasher genre, the characters on the chopping block are bland and undistinguishable. The ones that stand out are Meg (Jennifer Starrett), because she is the Obvious Final Girl who isn't so sure they should be partying with a dead man; Saint (Luca Bercovici, who was the screenwriter for Ghoulies and Rockula), because he is named Saint and also is Meg's boyfriend; and Stu, because he is played by Jeffrey Combs, who would rise 80's horror royalty after his role in Re-Animator the following year (rumor has it he was cast because they needed a brunette to match the severed head they were using). 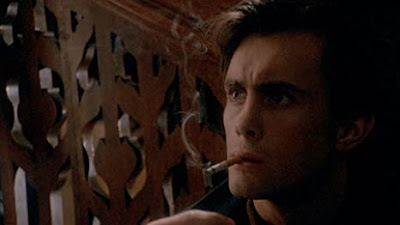 Oh Jeffrey, you have no idea what's coming. I envy you.

Basically, this film was created on the same model that would Troma would later use to produce the mediocre Girls School Screamers: a big mansion, a group of co-eds (mostly female), and just enough supernatural mayhem to separate it from even more basic slashers. The only considerable difference between these two movies is that in its extended prologue, Frightmare actually spends time with a character who's over the age of 25, as Conrad struts and preens his way through a mini Theatre of Blood remake.

As an exercise in running characters through the slasher formula with little embellishment, it's totally watchable, though there are several dozen mediocre slashers I would rather throw on before pulling this one off the shelf. The kills are at least varied and in ample supply, even though only 3 of them really exert themselves as any sort of special effects spectacle. We do unfortunately get a lot of the undead Conrad holding his hands up to his temples and bugging his eyes out while something vaguely telekinetic happens to his victim, which is disappointing. We have a physical killer wandering around, so why not just have him stabbing people with corkscrews and whatnot? It's not hard!

The space between the blandly functional kills is where they really get you, though. Even with its tight run time, there's a lot of flab on Frightmare. Especially before it commits to being a body count picture in earnest, we're just stuck hanging out with an undifferentiated mass of white people who are all equally unpleasant and think it's the height of comedy to flirt with a corpse. 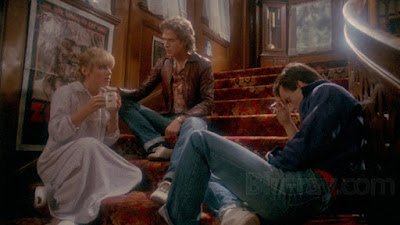 Not pictured: Anyone I'd want to spend time with.

There are a couple times that Frightmare nods toward the campy classic it might have been (especially when we spend time with anybody connected to Conrad's home life, which seems utterly bonkers), but largely it is content to go through the motions and not suck harder than it needs to. Except for the cinematography, which sucks hard all the way through. As you can see in the screenshot above, anything that's bright enough to cause glare will create a constellation of hazy glow that obscures anything around it (I liked cinematographer Joel King's work better in a film I liked worse, 1981's Just Before Dawn).

The best I can say about Frightmare is that it indeed does everything it needs to do to be a slasher movie. If you've seen everything there is to see and you're on the constant hunt for more material, this one will arrange those impulses in your brain in the right order. I understand if "it's not entirely unsatisfying" isn't exactly selling you on Frightmare, but that was never my intention anyway.

Killer: Conrad Radzoff (Ferdy Mayne)
Final Girl: Meg (Jennifer Starrett)
Best Kill: In the film's single best effect, Eve is menaced by a floating coffin chasing her down the stairs before it smashes her body like a battering ram.
Sign of the Times: Conrad's mausoleum is marked with a tacky flashing neon star.
Scariest Moment: Conrad's mouth emits a horrible prolonged screech when he corners Saint in an embalming room.
Weirdest Moment: Apparently the ghost of Conrad gave his widow the phone number of the film society's mansion.
Champion Dialogue: "Good night, sweet prince of ham."
Body Count: 9; not including an additional 18 victims implied to have been murdered by Conrad prior to the beginning of the film.

TL;DR: Frightmare is a paint-by-numbers slasher that is satisfying, but at the minimum possible level.
Rating: 5/10
Word Count: 1051