It Ain't A Lemon Party Without Old Dick 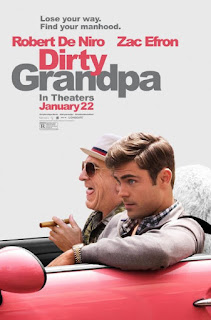 Would you believe me if I said that Bad Grandpa is the best comedy film I’ve seen in years?

No, neither would I. Aside from the fact that my yearly rewatching of Airplane! would inevitably preclude such a claim, Dirty Grandpa is a swollen hernia poking from the torso of Hollywood. And I’m saying this as a person who actually watched this movie on purpose. It’s perhaps the most January-ish January comedy ever released, lazy and charmless in all the wrong ways. But let’s not beat around the greying bush, let’s dive on into this sucker! 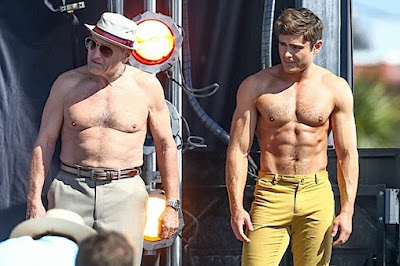 The things I do for you people.

In Dirty Grandpa, Jason (Zac Efron) is a Stepford grandson. He lives a yuppie fantasy, working at his dad’s law firm, wearing sweater vests, and preparing his wedding with the blonde-haired, blue-eyed, Meredith (Julianne Hough) a controlling shrew so ludicrously unpleasant that she passive aggressives Jason into picking his rehearsal dinner tie color during his grandmother's funeral. When Jason agrees to drive his bereaved grandfather, Dick (Robert De Niro) to Florida for a couple days, the old man reveals that he’s hot to foxtrot and hijacks the trip, taking Jason to Dayton Beach for some raucous carousing with filthy co-ed Linor (Aubrey Plaza) and her friend Shadia (Zoey Deutch), Jason’s high school classmate with whom he has an instant rapport.

Oh, they also have a gay friend who’s about as reductive a stereotype as poor Meredith (though without being actively sociopathic), but he’s also black so De Niro can have a two for one deal on offensive material that screenwriters think old people can get away with. They get to Daytona, De Niro makes approximately one kiloton of vulgar jokes that are only intermittently recognizable as humor, and then more plot attempts to happen at the very end. 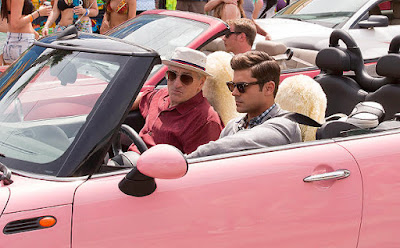 Help, I’ve fallen and I can’t get it up!

The thing about Dirty Grandpa is that it so obviously adheres to the male bonding sex comedy formula that it literally doesn’t even need to go through the motions. You can so intimately understand where the plot is going from the very first scene that it almost feels like you’ve watched an entire film even when it only skims through the story at its broadest points. Much in the same way that Julianne Hough’s shrieking beast of a character exists solely to make the boring, kind of deluded Shadia seem desirable in comparison, the plot falls back on lazy comedy movie stereotypes so it seems like it actually exists.

So with the plot comfortably out of the way, Dirty Grandpa frees itself up to crap all over Robert De Niro’s legacy. Hell, it craps all over Zac Efron's legacy. The High School Musical trilogy doesn’t deserve this. How does Dirty Grandpa’s humor suck? Let me count the ways…

Mind you, Dirty Grandpa’s “old people are racist and homophobic and ableist and make rape jokes apparently” shtick is less prevalent than some of its illustrious peers, but when it crops up, it’s all the more painful for its halfhearted commitment to its abrasiveness. They seem to think that they can render gags that are both insanely offense and stale acceptable by having a character point out just how offensive they are. Nice try, Dirty Grandpa, but you can’t cover your ass. It’s swaying gently in the wind, exposed to the elements. Speaking of, this kicks in at about the 20-minute mark, at which point the twelve people in my theater are reduced to six.

Certain one-liners just drift through the void of the film, haphazardly colliding into scenes at the most inopportune times. My current working theory is that the original draft underwent a heavy rewrite, but the script editor forgot to delete certain lines, leaving them jammed into the middle of scenes like rocks diverting a stream. That’s the only possible explanation for the mind-boggling preponderance of non sequiturs that crash into the middle of otherwise unassuming scenes.

3) Grandpa is a felon

4) They break the laws of physics to force jokes to work.

There’s a scene that requires a stuffed animal that is manifestly present on the ground to not be there, so it vanishes without a trace. There’s a scene that forgot it could have been set up an hour ago, so a hacker on a moped materializes from thin air to bridge the gap. Almost every scene has a square joke being rammed into a round hole, because nobody realized that, if they took the time to sand the edges, it would actually fit the way it was supposed to.

Yes, this is that kind of movie. 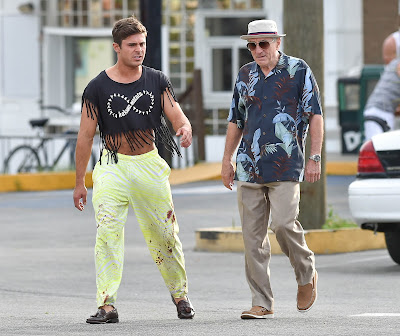 The dream of the 90’s is alive and well.

Not only is the humor scraped off the bottom of a crusty plunger, it’s not even presented well. The editing hops, skips, and jumps around dialogue actively destroying punchlines by cutting around lines and arbitrarily inserting over-the-shoulder shots in a manner so conspicuous that I suspect no cast member could actually complete a take without breaking down into heaving sobs and cursing their agent’s name, forcing the scene to be cobbled together in ADR. The editing has the rhythm of a drunk woodpecker and it totally obliterates most of the film’s potential.

But do you want to know the absolute worst thing about Dirty Grandpa? It has some damn hilarious scenes, Mind you, there’s as widely scattered as M&M’s in cheap trail mix, but they’re there. These moments are almost exclusively provided by Adam Pally as Jason’s indecorous cousin and Jason Mantzoukas as the friendly neighborhood drug dealer. My sense of moral integrity wants to believe that their lines were entirely improvised, but I’ll be fair and give credit to the screenwriter for allowing these two characters their moment in the sun. Frequently, their scenes are actively gut-busting and quotable, which makes the film even more disappointing because here’s actually a reason to endure the cinematic napalm that forms the remainder of its runtime.

The one other savior of Dirty Grandpa is Aubrey Plaza, who is delightful for about 75 percent of the time. When she’s forced to flirt with De Niro, her discomfort is palpable, especially taking into consideration the film’s weird aversion to actually depicting sexuality despite its rampant vulgarity (as far as I can recall, there’s not a single topless woman in the movie, and the film’s only scene of the sex act is between two people who are more or less fully clothed and evidently plan on using their own underwear as contraception.)