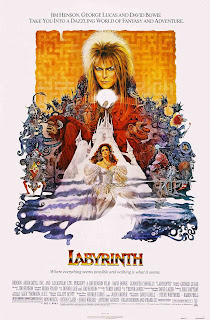 When a young woman accidentally banishes her baby brother to the goblin kingdom, she must work her way through a fantastical labyrinth to save him.

Obviously, Labyrinth made its way into my screening schedule due to the untimely passing of rock icon David Bowie, but it’s also a very appropriate interlude during the midpoint of my Muppet marathon. The last feature film directed by Jim Henson, Labyrinth is one of the final puzzle pieces in a career dedicated to converting the truly bizarre into the mainstream. The narrative of Labyrinth is piecemeal, part Alice in Wonderland, part Wizard of Oz, with the linguistic cunning of The Phantom Tollbooth, but beneath the vignettes of Jennifer Connelly’s journey there’s a dark, intelligent mind pulsing, constantly bursting forth with fresh, nutty ideas.

In the broadest sense, Labyrinth is about growing up and learning to share with/care for another human being. But Labyrinth is also about the poisonous behavior of clinging to material possessions, the unreliability of the rules by which one perceives the universe, and Jim Henson showing off just how devilishly creative he could truly be. The creature designs that erupt across the screen are feverish triumphs of character creation.

From large to small, every monster, goblin, anthropomorphic door knocker, cockney worm, etc., etc., etc. has a personality and a detailed, idiosyncratic look. My personal favorites are the lichen-covered stone “Helping Hands” that guard the oubliette, and the trash ladies who roam the dump with their prized possessions piled on their backs, but every single creature has the potential to be somebody’s favorite for any number of equally sound reasons.

Labyrinth is confidently stylish and almost irritatingly large scale. The goblin battle in the third act somehow manages to wrangle puppets, life size monster suits, Jennifer Connelly, a dog, and rolling boulders all together in a dazzling, balletic display, sometimes all in the same shot. Labyrinth’s is a sumptuously realized world that took meticulous care and boundless creativity to produce, something Henson possessed in spades.

But above all else, Labyrinth is thoroughly weird. This is kind of unavoidable that features David Bowie in a lead role and lets him do the music, but that ain’t even the half of it. It’s a brain-bubbling stew of fantasy iconography, 80’s sludge pop, spontaneous reggae numbers, and Bowie music video interludes. Just like the titular labyrinth itself, it’s impossible to predict what’s around the next corner, which is why it’s pretty much perfect for kids and their frayed attention spans.

There are moments where I must throw my hands up and admit that I have no idea what’s going on or why (like the totally pointless, nonsensical, masterpiece of a song “Magic Dance”), but whatever the reason, it’s relentlessly captivating stuff.

For our podcast episode about The Beyond (including a lengthy Bowie tribute at the beginning and end), click here. 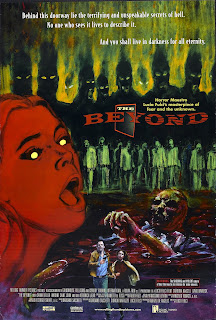 A young woman inherits a Louisiana hotel, only to discoer that it is built over one of the seven entrances to Hell.

If Dario Argento is Italian horror’s Steven Spielberg, Lucio Fulci is its Roland Emmerich. He’s artful in his own way, but he goes straight for the jugular instead of tooling around with wastes of time like prestige, theme, or that bane of cinema, subtlety. In The Beyond, bad things happen because it’s Hell, dammit. Why are you trying to think things through when a man’s face is being pelted with glass?

The Beyond might not have much of a way with words (Or plot. Or logic.), but as a living gallery of excruciating pain, it’s undeniable. Continuing his lifelong vendetta against the human eye (this guy must have Un Chien Andalou as his screensaver… Film student humor!), he finds ever more extravagant ways to gouge, pluck, skewer, and otherwise inconvenience that accursed white orb. And that’s just the bedrock of an elaborately layered system of gore, from bloody falls to crucifixions to freaking tarantulas devouring a face. It’s an 80’s Italian film, so the effects don’t necessarily hold up, but they’re so gruesome that they bypass your brain’s reality cortex and dive straight for the “I’m gonna throw up” lobe.

The Beyond is a breathtaking gonzo gorefest, the ultimate visceral experience that horror filmmaking can provide. Its approach to gore can be easily summed up by one of its scenes, in which a woman is dissolved by acid, a wave of fluid sending her decaying body across the floor as a viscous, red foam. The Beyond is exactly that, an implacable crimson tidal wave threating to overtake you.

Even amidst all this killing, Fulci never forgets to properly represent Italian horror, stylishly juxtaposing his kill scenes with moments of bucolic serenity, doubling down on the rapid cuts, rack focuses, and extreme close-ups so you’re incapable of forgetting which country is sponsoring this particular nightmare.

My only real issues with The Beyond are its slippery pacing and its climax. The dubiously dubbed dialogue scenes tend to drag like a 2 by 4 nailed to the back of a Hot Wheel car. There’s only so much momentum you can get out of wood. And the third act culminates in a bizarrely shoved-in, molasses-paced zombie sequence that seems like (and is) an ill thought-out studio note. Those two flaws combine with enough heft to knock The Beyond down a peg, but it’s still an exciting, revelatory, deliciously wicked motion picture.