May All My Backlog Be Forgot

I know you’re probably still sifting through that gargantuan post I dumped on you two days ago, but I would like to take this first week of 2016 (Oh man, we really are living in the future, aren’t we? The other day I met a Big Lots cashier who was born in 2000.) to enact one of my New Year’s resolutions. As you may or may not know, I have vowed to write a review of every single movie I’ve watched since I started this blog. However, as my work gets harder and my free time shrivels away, it has become more difficult to pen my ambitiously wordy reviews with my old frequency.

I’ve already begun to transition to a new format, bestowing full reviews on current or featured movies and penning medium-length reviews for the rest. But the avalanche of film with which I’ve concluded my year has left me with a backlog of embarrassingly overwhelming magnitude. In an attempt to clear my slate before the cinema offerings of 2016 really get kicking, over the next few weeks I’ll be flushing out my system with a glut of mini-reviews. I’ll also be finally catching up with some promised titles. Sorry, Hunter. We’ll be starting with a set of films already reviewed in full on my podcast, Scream 101.

Please enjoy this Popcorn Culture reboot and have a wonderful 2016! 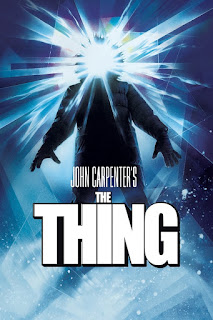 An Arctic team discovers a spaceship buried in the ice, along with a shape-shifting alien creature that infiltrates their group.

The thing about The Thing is that it has pretty unequivocally the best practical effects in the history of cinema. Sure, some scenes have aged better than others. But even the most jaded of modern viewers, those caustic children of CGI, will be utterly unable to keep their spines from turning to jelly when that severed head sprouts spider legs and stars skittering across the floor. It’s a movie full of gooey, bombastic effects setpieces, and yet it still lets its smaller moments (of which there are plenty, because John Carpenter isn’t made of money) breathe.

This can be seen in both the special effects (a cut thumb and the subtle detail on an icicle of blood are just as chilling as the grand latex arias that follow) and the tension building. This is a story about paranoia. Whether it be AIDS or commie related (pick your metaphorical poison), it’s a harrowing masterwork of distrust that places just as much emphasis on the dialogue scenes as the blockbuster heebie jeebie showcases. The characters themselves are a smidge shallow, but it works in the context of not really knowing your fellow man (there are no women in this film, the musk from Kurt Russell’s bear repelling femininity like Kryptonite).

And at any rate, they’re all very well-performed. Even the dog is an incomprehensibly terrific actor, providing a powerful argument for the introduction of a Best Animal Wrangler Academy Award. Overall, The Thing is a chilly menace, propelled by a thumping Ennio Morricone score, John Carpenter’s stark, Arctic cinematography, and enough latex to smother a small army. 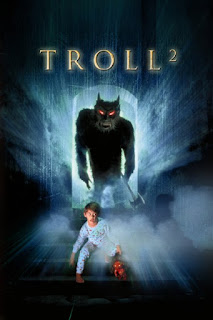 A vacationing family learns that the rural town they’re staying in is populated by wicked, people-eating, vegetarian goblins.

There are bad movies, there are fun bad movies, and then there are comprehensive experiences that transcend the mere act of filmmaking. Guess which category Troll 2 falls into. A jumbled hash of lunacy, Troll 2 is a treasure trove of unintentional comedy. Humor thrives on the unexpected and the increasingly wacky ways the film flies off the rails are an endless spring of entertainment. There is literally no way of predicting what scene might be around the corner. It’s a funhouse ride of lime green amateurism.

Yes, it’s a bad movie. Poorly translated lines are drunkly performed by amateur actors in front of cardboard sets and community theater special effects. But the madcap intensity and genuine earnestness with which the film was created have made it an instant cult classic.

Incredibly, given its reputation, there are actually a small handful of actually OK filmmaking moments, betraying director Claudio Fragasso’s long history with Italian B-movies. Two shock gags actually hold water, some low angle shots are legitimately imposing, and the finger trauma gore as one character is turned into a plant (don’t ask) is quite stomach-turning. But that semi-skill is part of why Troll 2 is so indelible. It actually sort of knows what it’s doing the whole time (as opposed to the rampant inadequacy of, say, The Room), and those moments help provide contrast for the truly inspired awful bits, of which there are a couple million.

Troll 2 is a must-see for any aspiring cult film fan. Watch it with a friend and seal your bond together with the super glue of dozens of new inside jokes and shared peals of snorting, gasping laughter. Plus, you’ll want a spotter in case you choke on your popcorn during the process. 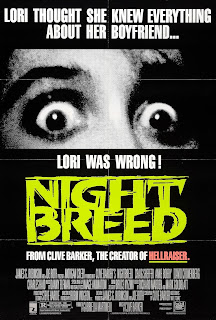 A young man is accused of murder and flees to the underground city of Midian to live with the monsters.

Nightbreed is a very scatterbrained movie. Sold as a slasher when it was really a parable about how minorities are treated by a society that doesn’t understand them, it made next to no money at the box office with its monstrous mish-mash. Now here comes the director’s cut two decades later, to finally restore the original monster-fueled, gothically romantic intent. It’s still a hell of a mess, but with Clive Barker at the wheel, at least you know the crimson tide is flowing in the right direction.

Nightbreed is like a magic eye puzzle. The individual pieces (a button-eyed slasher, a hillbilly shootout, a full rock ‘n roll number…) don’t exactly gel, but when you step back and unfocus your eyes, you can see the shape that it has created. An over-the-top, bold exploration of its universal themes of being sidelined and misunderstood by the world at large, Nightbreed is an orgiastic, hallucinogenic canvas on which Barker paints his magic.

More than character or plot, the headliner of Nightbreed is its spectacular make-up effects, used to create glorious (and gloriously expensive) creatures of every shape and size. A triumph of macabre monster manufacturing, the wicked creativity of Nightbreed is its goopy oozing, raison d'être. It’s an art gallery of nightmares more than it is a film, but that’s hardly a problem if you’re in the mood.

From Dusk Till Dawn 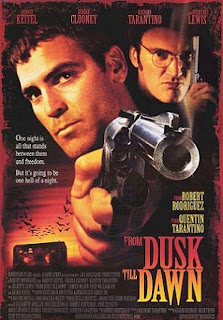 A pair of criminals and a kidnapped family end up fighting for their lives in a biker bar run by vampires.

Many fans of notorious foot fetishist/occasional filmmaker Quentin Tarantino have been yearning for him to create a horror film for quite some time. And while some detractors of From Dusk Till Dawn might still argue that he hasn’t, the truth is that the film is a campy horror flick penned by the greasy maestro himself, so it’s about as close as we’re gonna get to that wish, under the circumstances.

Directed by Robert Rodriguez in signature “Baby Quentin” style, FDTD is a fun thrill ride. Actually, it’s two fun thrill rides. The first hour, which is focused on the criminal exploits of the Gecko brothers, and the second, full of balls-to-the-wall vampire mayhem, don’t quite cohere together as well as they should, but they’re both excellent, flippant exemplars of the craft. Sometimes campy, sometimes creepy, always irreverent, the tone is what carries the stories through to the finish line rather than the actual plot.

However, it’s hard to find much to complain about when the ensemble comes together as ludicrously, ingeniously well as this film’s. George Clooney dishes out a standout role as a churlish, protective thug, and Tarantino gives the performance of his career as his little brother, an all too human monster imbued with sweaty, clammy menace. The rest of the cast also rises to the challenge, but the true blue standout is gore imperator Tom Savini as Sex Machine, the purest, most effortless bad-ass of Rodriguez’ career. From Dusk Till Dawn might not be a coherent whole, but the sum of its parts is far greater than that, anyway. 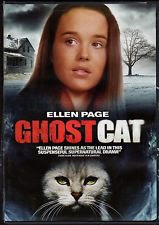 A young lady and her father move into a home that is watched over by the spirit of its former occupant, Margaret the cat.

The crux of our episode was that this “supernatural thriller” was quite easily repackaged as the heartwarming family film The Cat That Came Back, so as you can imagine, it wasn’t exactly a spine-tingling excursion into Animal Planet original content. A basically adequate Lifetime-esque cheese puff about saving the animal shelter from the wicked real estate developer, Ghost Cat ticks all the boxes for being as safe and bland (not to mention disappointing) as it could possibly be. There is one almost absurdly dark scene where the villain attempts to asphyxiate an entire barnful of adorable baby lambs and puppies, but it’s more a runway for Ellen Page’s ludicrous mid-2000’s fashions than anything resembling a horror movie.

As an insipid, rote story, it does the trick, but there’s nothing to make Ghost Cat stand out above all the other formulaic crap that daytime TV stations force sick (and hopefully delirious) people to sit through. There are some vaguely amusing tidbits, like how a lantern-jawed 21-year-old is supposed to be both a high school student and a viable love interest for Ellen Page (gag me with a spoon), or the presence of My Bloody Valentine Final Girl Lori Hallier as the animal rescuer with a heart of gold.

But the only reason to watch this movie in today’s enlightened age is the presence of Ellen Page, who gives far from a star-making performance. She’s clearly a step up from the other youngsters around her, but this is not a script that challenges its performers to push the envelope. My recommendation is to steer clear of Ghost Cat like you’re allergic to animal dander. Even in ectoplasmic form, it can still screw you up.

Listen to the podcast episode here!
Word Count: 1821
Also sprach Brennan at 11:48 AM