Ain't It Funny In A Rich Man's World 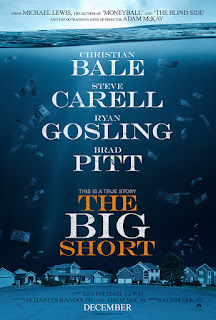 Three of Michael Lewis’ books  have been made into movies. The Blind Side was a stultifying ordeal, and Moneyball was… OK, I’ve never seen Moneyball. But the fact remains that these are very serious, Oscar-nominated-type dramas. So, who would you get to direct the next one, about the people who bet against the housing market before its collapse in 2008? Someone prestigious, probably. Richard Linklater? Ridley Scott? The Academy’s class pet, Alenjandro G. Iñárritu? Those are all fine choices, but the director the producers attached has made all the difference: Adam McKay.

Yes, the man helming this economic Oscarbait is none other than the director of Anchorman, Stepbrothers, and The Other Guys, not to mention the co-creator of Funny or Die. We now live in a world where it actually would have made sense if Will Ferrell had cameoed in The Big Short. Even more incredible, McKay is probably the best decision they could have made. 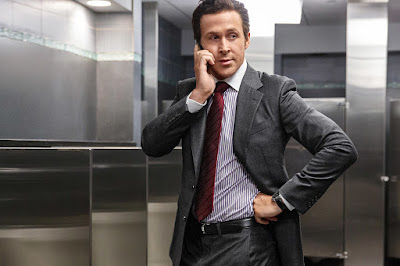 The worst is dyeing Ryan Gosling’s hair, but let’s find it in our hearts to forgive them.

Let’s get into it, shall we? In The Big Short, hedge fund manager Michael Burry (Christian Bale) discovers that the housing market is an enormous bubble, ready to burst at any moment. He creates a system that allows him to short the market, betting against its success. The banks think he’s crazy and graciously accept his free money. However, others catch wind of his scheme and think he might be onto something, including Deutsche Bank bond salesman Jared Vennett (Ryan Gosling), mercurial hedge fund manager Mark Baum (Steve Carell), and Charlie Geller (John Magaro) and Jamie Shipley (Finn Wittrock), two young hedge funders who team up with their retired mentor Ben Rickert (Brad Pitt). They too decide to short the market and wait patiently for the whole thing to collapse. 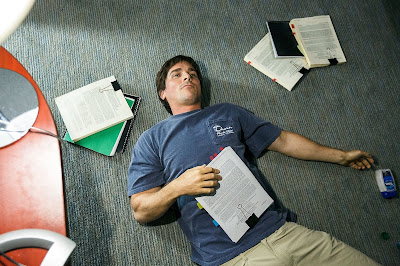 It’s about as morally dubious as it sounds.

The Big Short has two major hurdles. First, people could give half a crap about economics. Second, this is entirely based on a true story, one which is as open-ended and multifaceted as that nasty reality thing tends to be. The first is handled with aplomb, utilizing a Brechtian approach to engage the audience with its less-than appealing content. By that, I mean the movie – via the supple mouthpiece of Ryan Gosling – speaks directly to the audience, explaining the necessary information with some truly great cutaway gags and first-person comments on how the story actually played out.

This could easily have become a played-out gimmick, but it stays fresh and light, transforming hard economic theory into light, playful banter. Unfortunately, this freshness doesn’t necessarily apply to the “realistic” faux-documentary shooting style, in which the handheld photography, rack focuses, and quick pans get old faster than a ripe pear. It’s not too pervasive an issue, and you do get familiar enough with the aesthetic to just ignore it. But the cinema verite approach doesn’t exactly mesh with the Brechtian meta humor, which utilizes the artifice of film in a surreal and enlightening way, something that’s harder to highlight when the images are straining so hard to be gritty and real. It’s kind of like if someone hired the cinematographer from Precious to shoot a Muppet movie. It just doesn’t gel.

So yes, I’ll knock off a point or two for that, but it’s where The Big Short overcomes its second hurdle that the film really blossoms. As a plot, the film is pretty straightforward. Men predict, investigate, and outsmart the housing crisis. There’s not a lot of humanity there. Obviously a cast almost exclusively composed of awards season heavy hitters helps out some (Carell is probably the biggest takeaway as a man hiding his shattered soul beneath a shell of sheer bravado, but Pitt is an excellent conduit for both comic relief and serious political themes, Gosling is sharp and snappy as our de facto narrator, relative newcomers Magaro and Wittrock hold their own, and Bale does his Bale thing politely in the corner), but where The Big Short really hits its mark is in depicting the culture AROUND the housing bubble. 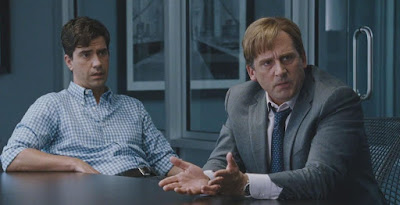 You know, the one that doesn’t exactly hit the jackpot during the whole shebang.

The film builds its real story in the nooks and crannies around the A-plot, especially in the transitions between years leading to the collapse. Every single edit in these interstitial scenes is fixated on one thing, highlighting the vacant, shallow, consumerist pop culture that has distracted everybody from their impending doom. [MEDIUM SPOILERS Their construction blends perfectly with the celebrity cameos that are used to explain economic theories. They function both as fun gags and an indictment of a culture that needs this kind of thing to be able to notice the hard facts.] It’s a lacerating satire that brings a dry textbook to life in the middle of a doomed culture. The Big Short is nothing less than an economic horror film, and an extremely effective one at that.

It’s funny, it’s terrifying, and it’s utterly unique, a combination it never could have accomplished without a director like Adam McKay. He balances his tones with impressive acuity, imbuing even generic-sounding scenes with an idiosyncratic twist. Perhaps the single best moment in the film is a scene as simple as a set of people leaving a convention. Observing the differences in their appearance, demeanor, and the cars they drive provides an eerily stunning insight into their characters and their world. It’s a film littered with gems like these, and because of that it’s without a doubt the best based-on-a-true-story flick of the year.

TL;DR: The Big Short is a captivating, innovative exploration of a seemingly dry concept.
Rating: 8/10
Word Count: 968
Also sprach Brennan at 10:07 AM