New Year's Resolutions: And Another Thing

Just when you thought it was over… My implacable backlog continues to grow, necessitating another slate of mini reviews. 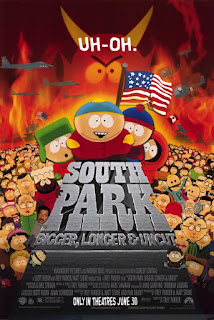 
The kids of South Park become obsessed with a vulgar Canadian movie, prompting a parental crusade against Canada that erupts into all-out war.

South Park: The Movie. It’s just like South Park the show, only bigger! If you like the show, you’ll love the movie! Otherwise, steer very clear. I could just end my review there, honestly, but I would like to take this time to commend Trey Parker and Matt Stone for being two of the leading musical theatre songwriters of our generation. That statement sounds less ironic following the success of The Book of Mormon, but the fact remains that the duo has been writing incredibly rewarding musical theatre essentially since their careers began.

In addition to ramping up the vulgarity and offensiveness of their show, the movie also expanded their fairly frequent lyrical moments into a full scale musical extravaganza that’s just as much Les Misérables as it is South Park. That is, if Alain Boublil and Claude-Michel Schönberg had seen fit to include a truckload more F-bombs. With an endless array of catchy tunes including the Oscar-nominated “Blame Canada,” the über-catchy “What Would Bryan Boitano Do,” and the downright genius, reprise-laden “La Resistance (Medley),” SP:BLaU is legitimately one of the better original movie musicals of all time.

Fun music with a sharp political agenda is most certainly an ironclad reason to recommend South Park, although the plot sequences do lack a bit of the thrust required to render the film itself a true blue classic.

My Soul to Take 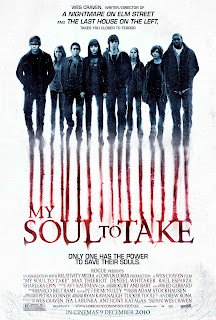 
Seven kids were born prematurely on the same night a notorious serial killer died. Now they’re being hunted down on their 16th birthday. Could one of them carry his reincarnated soul?

I love Wes Craven and end to appreciate his works, good or bad, but boy am I glad that My Soul to Take didn’t wind up being his final film. His first self-penned script in nearly a decade and a half, My Soul to Take certainly contains nuggets of his typically idiosyncratic ideas, but it flops in its execution. Craven is nothing if not a skilled storyteller, but as a 70-year-old man, it becomes understandably difficult to write teen dialogue and situations. His script is littered with sub-Diablo Cody slanginess and a nigh-on incomprehensible story flow. It’s like one of those arcade games where your quarter bounces randomly down the pegs, with every turn almost exclusively going somewhere unpredictable and frustrating.

There is a lot to dislike about My Soul to Take, all of which I heartily do. The killer is everything Craven’s villains never were: Vulgar, crude, and loudmouthed. The less hardcore mindset he acquired as he grew older is queasily unsuited to bring this character to life, and his direction leans a little too heavily on MTV-style quick flashes and arbitrary slomo. It’s a garbled mess with subtext that pretty clearly announces that he’d rather be out bird watching than working on this film. Every genius has their duds, and their willingness to try new things make my appreciation for them even stronger, but damn is this ever a flabby, sputtering dud if I ever saw one. 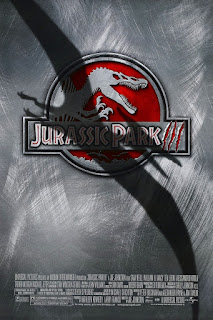 
Dr. Alan Grant is tricked into visiting Isla Sorna by a rich couple who want to save their stranded son.

So, the third Jurassic Park movie. This is the one that absolutely nobody talks about, so I was definitely apprehensive. Fortunately, no JP movie could be worse than The Lost World with its quiet bongo antics so I was in for a treat. I didn’t love it with quite the spittle of Friend Hunter over at Kinemalogue, but I certainly feel it doesn’t deserve its ignominy. It’s a popcorn flick through and through, but that doesn’t mean it ain’t worth a watch.

The stunning action setpieces that typically define these movies are back in full force, with a third act that leaps from stellar moment to stellar moment like stones across a stream. JPIII knocks its characters down, slits them up, drags them through the mud, attempts to drown them for good measure, and still comes back for seconds. It’s an exhilarating whirl, like being trapped in a washing machine. As an overall story it’s a little more generic, but it does the trick, bringing an estranged family together with the power of Amblin.

It’s got its action, a healthy sprinkling of comedy bits, a splash of theme about paleontology becoming defunct no that real life dinos are alive and stomping… There’s naught to complain about. It’s certainly tackier than the original masterpiece, and a talking raptor dream sequence is just about one of my worst movie watching moments of the whole year, but it’s a fun jaunt back into Crichton’s world, minus his heavy-handed political bleating.

Getting Go: The Go Doc Project 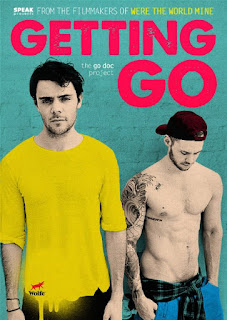 
A college student pretends that he’s shooting a documentary to get close to a go-go boy he’s obsessed with.

I’ve always been a proponent of applying the found footage style to non-horror genres, so this low key vérite romance is right up my alley. Part Weekend, part Breathless, all pretentious, it’s an interesting look at modern romance without getting too obnoxiously hung up on that “modern” part. It’s not all treatises on social media and tech trends, but a human portrait of a relationship between two people who fundamentally don’t work together. One is obsessed with his perfect ideal, the other is confident enough to know not to change himself for a man.

Mostly just conversation-based, Getting Go could very easily have been a snoozefest, but a layered script and some colorfully innovative editing keep the pace brisk, save for a closing ten minutes that could really use a trim. The acting is a little rough, especially from the nonprofessional Matthew Camp, but the two leads have enough chemistry to smooth out most of the clunkier line readings. Getting Go lives in its silent moments, which let the dialogue-packed scenes settle into your brain with contemplative stillness. It’s no new classic, but it’s sexy, it’s stylish, and it has a great soundtrack. What more could you want?