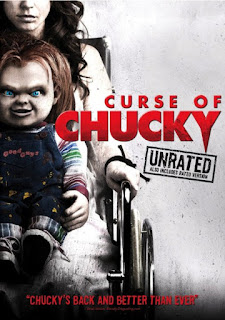 As you may or may not have noticed, I have several features up and running that are unfinished. My blog is like a spider web of loose ends that I’m scrambling to pick up between two jobs, an attempt at a normal human life, and my incessant, unquenchable need to consume as much content as humanly possible. Rest assured, I’m working diligently to create these final posts for your reading convenience.

Which brings us to Curse of Chucky, the sixth and, as of this writing, final film in the Child’s Play franchise. Scooting in just under a decade after Seed of Chucky, this direct-to-video sequel comes after the longest gap in franchise history. Not only that, but it’s directed by longitime screenwriter Don Mancini, who also helmed Seed of Chucky, which despite its charms is indubitably the worst of the series. This is a tried and true Julia Childs recipe for cinematic disaster, and yet it turned out to be one of the best sequels in a fascinatingly strong franchise. Let’s dive in, shall we? 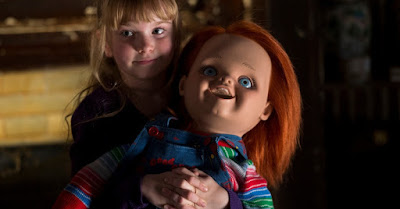 Thank you for waiting. You’ve been a real doll.

In Curse of Chucky, horror is back at the forefront for the first time in at least three entries. Nica (Fiona Dourif) is a wheelchair-bound young woman living under the thumb of her overprotective mother in a sumptuous gothic house that would give Guillermo del Toro chills. One day, a Good Guy doll is mysteriously shipped to their front door. Not long afterward, Nica’s mother is found lying in a pool of blood at the foot of the stairs, an apparent suicide.

Two guesses as to what really happened. As Nica’s extended family – her toxic sister Barb (Danielle Bisutti) who wants to sell the house, Barb’s disgruntled hubby Ian (Brennan Elliott), their “sex on two toothpicks” au pair Jill (Maitland McConnell), and their young daughter Alice (Summer H. Howell) – come to stay, mysterious happenings begin, well… happening. Alice befriends the talking doll, Chucky (Brad Dourif), and the residents of the house begin to die one by one whenever he’s around. 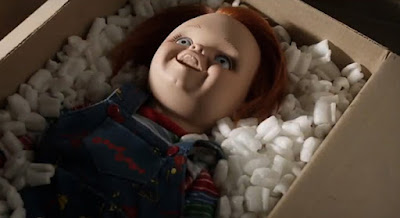 You’d think people would have issued a recall on these at some point.

Curse has a lot of what Seed lacked, and curiously I don’t mean money. Despite having less than half the budget of his already shortchanged previous entry, Mancini brings his A-game. Lord knows what he’d been doing since 2004, but whatever drugs he took certainly expanded his visual vocabulary something fierce. To put it simply, Curse of Chucky is downright stunning, tossing Seed’s overlit sitcom aesthetic into a woodchipper and pulling a shadow-drenched gothic dreamscape out of thin air.

The camera pirouettes gracefully over the action, highlighting the aggressively baroque production design, and damn is it ever apparent that this movie is directed rather than merely dumped into a camera. It’s a gorgeous-looking piece, especially in a flashback that allows bold yellow flowers to assert themselves over a crisp black and white frame. This environment provides the perfect atmosphere for Chucky to return to his horror roots, and in fact this is the scariest he’s ever been since his eerie tour de force in Child’s Play 2.

Actually, scratch that. Chucky himself is still very rarely a credible menace (his adorably chubby, bootie-clad legs still fail to strike fear into my heart, incredibly). It’s the movie around him and the situations he creates that provide the true spine-crawling power. The fear is subtle, frequently character-based, and returns the franchise to a very classical horror style. In fact, the single best scene in the movie is straight out of the Hitchcock camp of suspense – one of the bowls of soup at the dinner table has been poisoned, but we don’t know which. It’s playful, chilling, and doesn’t require massive budget expenditure. 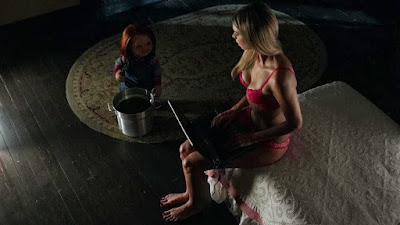 Also despite its budget, Curse of Chucky’s gore is pretty wet and wild. Necessarily, some of the kills aren’t quite so outré, but a solid handful are grotty, glistening pearls. Never say Mancini doesn’t know what people who stuck around a slasher franchise for six entries are looking for.

OK, now that we’ve been as sweet as punch for the longest sustained period Popcorn Culture ahs ever seen, it’s time to get down and dirty. Curse of Chucky is a direct-to-DVD film. An unnecessarily fantastic example of the form, yes, but it is nevertheless beholden to a certain standard of quality. It just can’t match the expressionistic celebration of cinema that was Bride of Chucky, and there are sinewy hunks of filler that stick in your throat on he way down, especially any scene featuring a pre-doll Charles Lee Ray in de-aging makeup that makes him look uncannily like Tommy Wiseau on a hot day.

It ain’t perfect, though it is a perfect vehicle for the lovely and talented Fiona Dourif, who got the part through her dad, but kept it through sheer charisma and skill. At the end of the day, Curse of Chucky isn’t the best Child’s Play sequel, but the fact that a sixth entry in a franchise could be in the top 50 percent in terms of quality is pretty damn remarkable.