Let's finally put a nail in the coffin of the holiday season with a dose of mini reviews for some festive favorites! 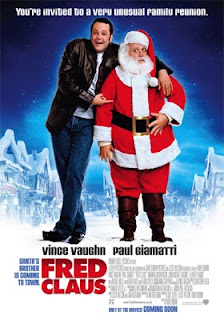 Santa Claus has a naughty older brother who is jealous of living in his shadow all those years.

Is there a word for holiday flicks where the plot’s every beat is pretty much telegraphed from the poster, and whose sole reason for existence is to act as cinematic comfort food during the Christmas season? I’m pretty sure there isn’t, but I would like to submit for your consideration the phrase “Fred Claus.” No moment or character in this entire film is original (save a totally arbitrary cameo by Ludacris as an elf DJ, but that’s only because the people who brainstormed that for previous holiday movies were fired), but that doesn’t mean it won’t wash down like cookies and a glass of milk.

The cast is admittedly pretty grand, including Kathy Bates, Paul Giamatti, and Kevin Spacey (in another one of those thankless roles he kicked around in while waiting for the world to invent House of Cards), but the script is so rote, nobody can make much of a dent in it. Surprisingly, the one performer who breaks from the pack is lead actor Vince Vaughn, because he (mostly intentionally) seems to be inhabiting a completely different universe than everyone else. His acerbic, quick-tongued performance is a reminder that the man can be genuinely good when he tries to be, creating a totally relatable, humorously durable con man out of thin air. It’s a bleak and humble character, and he’s remarkably arresting to watch. 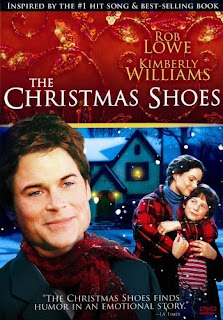 
A workaholic lawyer learns the true meaning of Christmas when a young boy enlists his help buying shoes for his terminally ill mother.

As a TV movie based on one of the most notoriously bad Christmas songs of all time, Sergio and I went into The Christmas Shoes expecting to get a barrel of unintentional laughs. Unfortunately, as happens so often with made-for-TV fare, we found that it refrained from erupting into the expected over-the-top antics, instead plodding through the same typical sub-Lifetime fare as any other on-air holiday trifle.

Sure, there are some sparkling moments, like the mom’s inexplicably shoe-centric backstory, the network’s insistence on playing the “Christmas Shoes” song over a climactic moment, or any scene where you get to watch Rob Lowe flounder through the syrupy dialogue, but for the most part, the movie puts its head down and trudges to the finish line. Save for one actress, the whole thing would have been an insipid wash.

That actress is Kimberly Williams-Paisley as the shoeless mother. She displays a frankly flabbergasting range showing off her natural charisma in her pre-illness scenes and stoically embracing the symbolic role she is forced to shoulder in the second half of the story. Considering that her role, while secondary, forms the emotional core of the entire piece, his is an indomitable triumph. The script may be slack, but she picks up the reigns and manages to make them sting, elevating Christmas Shoes’ shallow gruel into a still meager but at least tasty holiday meal. 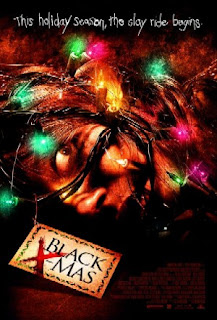 
Sorority girls are celebrating Christmas, only to discover that the serial killer who used to live in their house has just escaped and is picking them off one by one.

Being a horror fan in the 21st century, one needs to get used to pointless remakes of beloved properties. And as much as I despise the likes of A Nightmare on Elm Street 2010 or Rob Zombie’s Halloween, I always try to come to remakes with an open mind. And when we land on Black Christmas, a property I began to truly appreciate only recently, I figured a screening of the remake wouldn’t sting quite so bad as a franchise I had a much more abiding affection for. I was wrong. It was worse.

Black Xmas is a much more palatable bad remake than many that I’ve been subjected to, but watching it in close conjunction with the original masterpiece is like trying to pretend Red Lobster microwave rolls are just as delicious as the real thing. Hell, it’s like trying to pretend they’re just as edible as the real thing. There are absolutely reasons to recommend Black Xmas, but they are so divorced from the ideals of character and suspense that dominated the original, it is all the more devastating and unsatisfying.

When I was watching Black Xmas, I found myself not being able to tell the characters apart. It didn’t help that the actresses looked pretty much the same, but I don’t think there’s a single member of the sorority who has character traits beyond having skinny legs, wearing seasonably inappropriate clothing, and being kind of mean. And for every actual good thing in the film, there’s a niggling flaw latched onto it like a lamprey. For example, there really is an ambitious amount of gore in the film, but a lot of it is too demurely shot to actually make out what’s happening, and almost every kill utilizes a plastic bag. This is presumably 1) an homage to the original, and 2) cheaper than buying prosthetics. However, the end result is that the movie feels like a repetitive assembly line of carnage.

I closing, it’s obviously too much to hope for a good script (“Merry Christmas, motherf**ker!” Bracingly original work, right there.). It’s obviously too much to ask for good villains (the reveal is nonsensical and leads to a grossly unnecessary, overlong coda). But when I get a campy gorefest and it’s bogged down by limp characters that are distractingly supermodel hot, even by remake standards, it’s like getting coal in your stocking. Santa skipped my DVD player this Christmas. 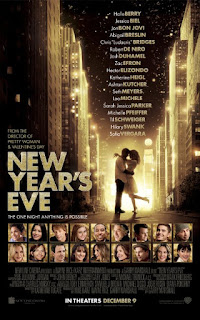 Garry Marshall’s Valentine’s Day was a crappy film. But it made money because it was cute and its cast included every known star this side of Alpha Centauri. Naturally, they were going to milk that for all it was worth. And thus New Year’s Eve was born. Notice that fours years have passed since that fateful premiere and there’s still no St. Patrick’s Day.

The bottom line is, New Year’s Eve stinks. It stinks like a sewer rat-gorgonzola sandwich. There are exactly five humorous moments in the entire film, two of which are unintentional, one of which is a thirty second Larry Miller cameo, another of which is Seth Myers being funny in spite of the script and his own body because that’s his natural state of being, and the last (and best) of which is a blooper that plays during the credits. And this is a film that’s two f**king hours long.

The thing about transplanting Valentine’s Day’s sprawling romantic comedy to the New Year’s holiday is that nobody in the world particularly cares about New Year’s Eve except as an excuse to dilute their bloodstream with as much alcohol as possible. Thus, the movie is forced to contort itself, plying a ridiculous amount of meaning to the day (“It’s New Year’s Eve. Anything is possible.”), frantically altering holiday archetypes (Ashton Kutcher plays a Grinch who despises New Year’s Eve, because that’s totally a thing), and straight-up inventing traditions (“Second chances expire at midnight.”) to the point that the holiday providing the film’s backbone is virtually unrecognizable.

Without a spine, New Year’s Eve is paralyzed, utterly incapable of even attempting to elicit laughter. Some gags fall flat on their face and some pop and fizzle like wet fireworks, but most of the time it’s hard to even identify an attempt to be funny. Do yourself a favor and make it your New Year’s resolution to quarantine yourself from this film. That’s one that I sincerely hope you keep.