Census Bloodbath: We All Go A Little Bland Sometimes 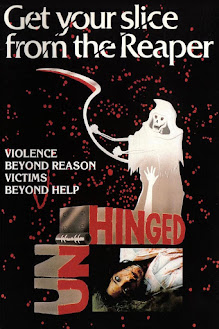 For once I don't have to open a review contrasting how awesome the poster is with how terrible the movie is! Though that said, I do think the little reaper guy is pretty adorable. He's having such a great time swinging that scythe around! Truly if you love what you do, you won't work a day in your life. And I also love what I do, even if it leads me to watching films like 1982's Unhinged, a movie so bland that when the British censorship board looked at it and considered giving it the dubious honor of becoming a Video Nasty (which they bestowed to plenty of movies that aren't worth watching), they shrugged and said "nah." 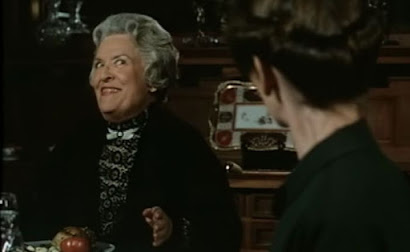 If your slasher movie wasn't nasty enough to offend the British in the early 80's, you made it wrong! Literally they would ban films without even watching them just for having certain words in the title.

Unhinged follows three indistinguishable young women, Terry (Laurel Munson), Nancy (Sara Ansley), and Gloria (Barbara Lusch), on their way to a far flung music festival when a torrential downpour leads them to crash into a ditch. They wake up in the stately rural manor of Marion Penrose (Janet Penner), having been brought there by the handyman Norman (John Morrison). If those names didn't clue you in to the fact that this is riffing on Psycho, the fact that Marion has a controlling, prudish, invalid mother (Virginia Settle) lurking about sure will.

The girls are forced to wait at the house until the storm settles, and things become creepier and creepier. Terry hears heavy breathing in the middle of the night, and starts itching to really explore that shed Marion forbade her to enter... Also there's a scythe-wielding maniac loose on the property, but she'll learn that soon enough. 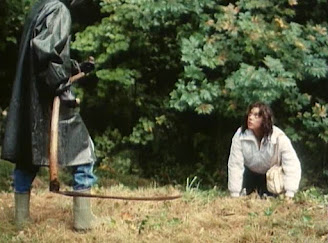 Although in a film that clocks in under 80 minutes, literally everything in the movie happens soon enough.

While I wouldn't go out of my way to say that Unhinged is particularly bad, there's not a lot here to help it stand out. Even by the standards of the 80's, this came far too late for anybody to be particularly interested in a lousy Psycho rip-off. That sub-subgenre had its place in 1980, with films like Silent Scream, Don't Go in the House, and obviously Dressed to Kill, but 1982? This was a different world. "Come On Eileen" was already out, for crying out loud!

It doesn't assemble any of the Psycho elements properly anyway. The mother-daughter dynamic isn't transgressive enough, the one element of the mother's story we come to understand (she abhors men and hates the mere mention of one) is inconsistent (why exactly has Norman been hanging around the house all this time, then?) and the obligatory transphobic ending doesn't even clearly deliver in what way it's supposed to be transphobic. I at least want to know why I'm mad, people!

If it can't stand out amidst such a meager pack of films (which also includes Funeral Home and Mother's Day, if you're counting), it certainly can't stand out among the slasher genre as a whole. The girls all perform with identical hollow expressions and flat trancelike deliveries except when they're allowed to scream, which finally gives them a little personality. There is some nudity, but it's so weirdly and haphazardly expressed that I don't see how even people who delight in exploitation of the female form would be able to maintain interest. And the body count is sadly low, necessarily so considering the small cast. 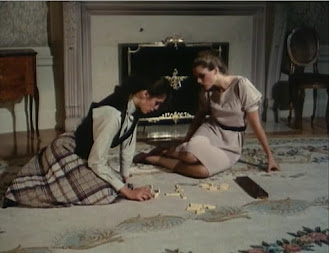 For most of whom this is their only credit, I can't imagine why.

The few kills there are are likewise disappointing. With one major exception (an axe to the face that gives us the one good gore effect the filmmakers have to offer), they are edited with the vision of "Psycho, only worse." We don't see weapons making contact with bodies, only girls writhing around with artfully placed Karo syrup smears on their faces. This works when it's 1960 and you're Alfred Hitchcock. But this is 1982, and director Don Gronquist is barely even Don Gronquist, let alone Hitchcock.

As far as good elements go... Well, there are some pretty neat helicopter shots of the girls driving, which bely a budget slightly higher than I might have imagined this movie to have. And honestly all in all I didn't hate Unhinged. It's engaging at the absolute lowest level, like a television commercial or a traffic sign. You don't necessarily regret reading "Peoria - 60 miles," but it hasn't added to your life in any way (unless you're going to Peoria, which I guess in this metaphor represents a keen desire to watch women sit in comfy love seats).

Killer: Marion Penrose (Janet Penner)
Final Girl: Terry Morgan (Laurel Munson)
Best Kill: There's only one real option, but it's a goodun. The axe directly to the face would be a standout even in a much better movie.
Sign of the Times: That luscious, glorious score that feels like rejected incidental music from Tron.
Scariest Moment: Nancy steps out of bed and cuts her foot on a tooth that just happens to be lying on the floor.
Weirdest Moment: Gloria gets the worst injuries in the accident and is confined to her room, so we don't see her for a full hour of the movie. When Terry finally goes to her room, I expected her to find a corpse, but no. Gloria was just chilling in there and the movie just kind of forgot to remind us about it.
Champion Dialogue: "I'll be sure to excuse myself when she breaks out the heroin."
Body Count: 4

TL;DR: Unhinged is a rote Psycho ripoff with nothing to particularly recommend it.
Rating: 4/10
Word Count: 1004

Also sprach Brennan at 7:55 AM