Cardboard Science: They See Me Rodan, They Hatin'

Our third and final entry in the Great Switcheroo with Hunter Allen at Kinemalogue! 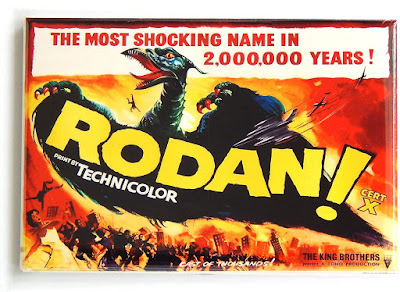 Hunter has been spectacularly kind to me this year in general. We've covered all the bases that most interest me in the world of 50's science fiction. An obscure forgotten work, a title mentioned in "Science Fiction, Double Feature," and now a daikaiju eiga, which roughly translated means "Japanese monster knocks shit down." Specifically, today we're here to talk about Rodan, the fourth kaiju movie from Ishirô Honda, the director and co-writer of the original Godzilla, which has been one of my favorite films from the annals of Cardboard Science.

I'm just cool that way, loving Godzilla is just more proof that my opinion is always very unique and special and different from everyone else's.

Rodan opens in a small Japanese mining town, where miners are dying at a rapid rate in one of the pits, scuppering initial suspicions that Goro (Rinsaku Ogata), a miner with a temper problem, killed one of his rivals. As the staff begins to pare down, the protagonists emerge, or at least the human beings who we can most reasonably call protagonists in a genre that always becomes largely disinterested in humans by the third act: engineer Shigeru Kawamura (Kenji Sahara) and Goro's distraught sister Kiyo (Yumi Shirakawa). They are in love, and isn't that nice for them. Moving on.

H-bomb testing and maybe global warming has caused tectonic plates to shift, creating the perfect environment for some long-buried eggs to hatch, unleashing giant dragonfly larvae upon the town that cause general mayhem until an enormous cave-in releases a much bigger problem: the enormous flying beast Rodan, who takes to the skies to cause havoc on the Eastern seaboard. The mining crew and the Japanese military scramble to find ways to contain the monstrous Pteranadon. 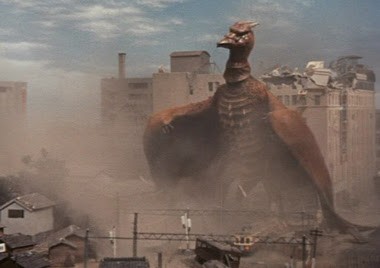 But not before it smashes up a Japanese cityscape or two.

So here's the thing. Not only is Godzilla a kick-ass monster movie, it's a profound and harrowing reflection on a nation bearing the literal and metaphorical fallout of the nuclear bomb. Rodan is... not that. And it's not trying to be! Almost certainly the three Godzilla movies Honda made before helming Rodan got that out of his system. He's just here to have fun, content with the barest scrapings of environmental subtext.

He largely succeeds too, though Rodan is fun in a much different way than Godzilla, and that way doesn't resonate with me quite the same. Rodan is a flying beast, so the warfare has largely moved from the ground to the air, with fighter pilots squaring off against the monster in dogfights that would be familiar to any fan of World War II cinema. Think Red Tails, but with a creature that can create sonic booms with its wings. Military cinema in general fails to please me, so foregounding that element over a dude in a suit stomping through a miniature Tokyo was naturally going to lose me a bit. 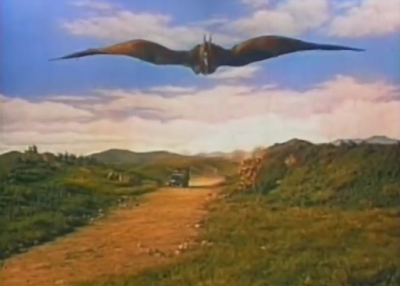 And while nobody comes to a Japanese kaiju movie to be bowled over by realism, some of the drawbacks to Rodan's special effects are too glaring to not come at a bit of a price. Having a completely airborne monster poses more of a challenge, and his rubbery wings (which barely flap, and somehow make a hilarious jet engine noise) don't seem to be lifting him so much as the string in his back. Convincing flying is always hard to pull off, and they certainly didn't have the resources to do so in 1956. But there's a reason the scenes with the giant larvae are more fun. They're tactile and the actors can actually interact with them, because their many moving parts (which create an unnerving, unceasing motion) are operated like a Chinese parade dragon rather than a dangling puppet.

All this is not to say I didn't enjoy the mayhem Rodan brings to the table. Especially in the scene where he smashes up a port city, this is where the detail in set dressing really comes out to play. Cars and trains are knocked into buildings, all the tiles are blown off a roof, and  a bunch of other physical, practical destruction redeem any faults the airplay might have. Honestly everything practical here is pretty satisfying, including the cave-in early on.

The human storylines falter a lot in the lead-up to the monster battle (Shigeru's amnesia is a wholly unneeded soap opera twist that comes from nowhere, and the romantic subplot fails to stick the landing), but I did enjoy the first act that is less special effects, more ominous dread. Whether its a cut to the bloody helmet of a pilot who perishes by an unseen force, or the grim vision of corpses floating in the flooded mine, Rodan certainly packs in the atmosphere when it can't afford to be showing nonstop monster shenanigans (although I dearly wish they hadn't included the element of Rodan's unseen attacks on Beijing and Manila, because if you're going to mention them, why not show them?).

And there's another tip of the hat toward a more serious tone with the grand finale, which is a strangely downbeat and lingering reflection on the tragedy of the great monster's destruction. But all in all Rodan just wants to goof around, and it does so with reasonable verve and vigor, even if Rodan the monster is hardly as compelling a central figure as some other kaiju I could name.

TL;DR: Rodan is a satisfying kaiju picture, though one that lacks the emotional punch or effects wizardry that the director is capable of.
Rating: 6/10
Word Count: 1076