A set of mini-reviews covering Mexican horror films discussed during the first half of month 4 of the Scream 101 podcast. 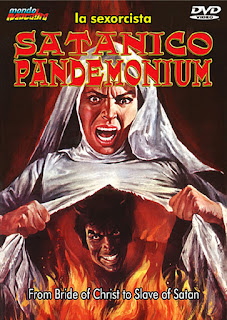 A nun is tempted by the Devil to perform perverse and violent acts in her secluded convent.

Exploitation filmmakers do love themselves some nuns. The built-in purity of a woman in a habit provides a quick and dirty entry point into the “corruption of innocence” plot that softcore horror directors like so much. But while the industry has access to a surplus of busty women willing to don a habit, they tend to greatly outnumber the talented directors working in the genre. Now, I won’t say Gilberto Martínez Solares is an untalented director, but I will say he directed 9 movies in 1979 alone, so his attention to detail might be a little lacking.

Now it might surprise you, but the technical quality of a movie isn’t necessarily a dealbreaker for me. As a connoisseur of trash cinema, for me the biggest sin a movie can commit is being boring. And because Satánico Pandemonium commits as many sins as it can get its hands on, why not toss that one onto the pile? In between its many scenes of orgiastic violence and star Cecilia Pezet in various states of undress, there lies an interminable array of nuns walking down stone corridors, across fields, or down staircases in what feels like real time.

Maybe the idea was that the audience should pay penance for the sin of watching this blasphemous film, and that penance is built directly into the film in the form of excruciating tedium. The scenes of sex and violence are decent enough in their own 70’s low budget way (I’ve never seen a more obvious retractable knife in a horror film), noncommittally titillating with softcore sex and vaguely bloody violence. The occasional startling image will crop up and succeed in creating some kind of atmosphere, but for the most part, these scenes are not worth the price you have to pay to reach them.

I will give Satánico Pandemonium this. There is actually a powerful subtext buried deep (very deep) within the film about how it’s not the Devil, but the harsh restrictions of the church itself that drives a person to sin. The repression of the convent, one of the most outwardly pious institutions in the world, has led our heroine to her outbursts, expressing extreme sexual desire and becoming uncontrollably violent when she is denied what she wants. This is the best horror movie link between sex and murder that I’ve seen in a long time, explicitly because it takes place in the milieu of the Catholic church.

I can’t recommend Satánico Pandemonium, but I respect it for its message and its attempts at being a bonkers sadomasochistic horror movie. And the special effects are at least slightly redeemed by some incredible smoking hands midway through. So… great. Maybe still don’t watch it though. 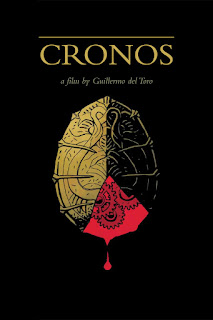 An antique shop owner dissevers a mysterious device that grants him eternal life but curses him with a thirst for blood.

We all gotta start somewhere, and Guillermo del Toro started with a movie about an alchemical vampires with a clockwork scarab licking blood off a bathroom floor. There have certainly been worse debuts, because although Cronos lacks narrative clarity, it reveals the strength of vision he director had even at a young age.

Although del Toro would better achieve almost every element in a later film (Crimson Peak has his best mysterious mansion, Pan’s Labyrinth has a better child element, and so on), Cronos still has an indelible personality that is distinctly itself. Perhaps the most directly Cronenbergian film he ever made, it has a terrific blend of the mechanical and the biological, the sheer wrongness of such juxtaposition fueling its sense of creeping dread.

The special effects and make-up certainly help in this regard. Although they show their low budget seams (del Toro’s ideas are just too big to fit in the realm of microbudget horror), they create sticky grotesqueries that shred your nerves more than any jump scare could.

Unfortunately, these triumphs are housed in a narrative that doesn’t make a lick of sense. His flawless blend of realistic drama and horrific fairy tale hadn’t yet developed, so the dramatic elements that the movie spends most of its time on are severely anemic. You don’t really get a sense of the old man’s personality or home life before his transition, so it’s difficult to connect with how far he has fallen. And honestly, his resistance of the vampiric curse it too complete. He never becomes truly monstrous, and there’s never a sense that he has any particular struggle avoiding his craving for blood.

He’s housed in a meandering plot that just sort of happens around him, though at least that plot contains Ron Perlman (working with del Toro for the first and certainly not last time) hamming it up as a hyperbolically acquisitive villain.

But while the plot and tone of Cronos are iffy, it remains an unassailable triumph of design, from the Cronos device’s clockwork mechanisms to the cruelly antiseptic villain’s lair. If you don’t mind a 90-minute slew of confusion and revulsion (which, really, is a good thing for the genre), check out Cronos. Otherwise, stick with his more established works like Pan’s Labyrinth or The Devil’s Backbone.