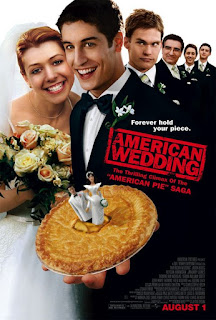 After the bigger, better, jam-packed magnum opus that was American Pie 2, the franchise had no place to go but down. Reducing the cast by at least half and hanging its hat on the hoariest of “waning sitcom” tropes, thus was American Wedding born unto the world in 2003, four years after the world was first exposed to the sexual appeal of baked goods. 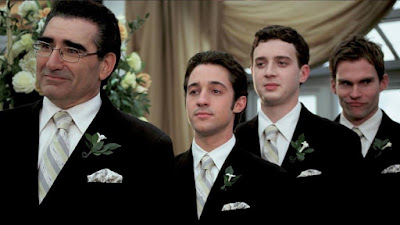 I’m surprised it took us so long to notice.

In American Wedding, hapless everyteen Jim Levenstein (Jason Biggs) has now become a hapless everycollegegraduate and is engaged to his girlfriend, the nymphomaniac band geek Michelle Flaherty (Alyson Hannigan). To help give her the perfect wedding, Jim enlists the help of his friends, Finch (Eddie Kaye Thomas), the high culture weirdo, and Kevin (Thomas Ian Nicholas), who settles comfortably into his destined role as the wallpaper, appearing only to offer vague platitudes and advice, then blandly keen about an offscreen girlfriend. Where’s Oz, you may ask, on this most important of occasions? Well apparently Oz is a figment of your imagination or possibly was a ghost the whole time, because this movie presents not a single scrap of evidence he ever existed.

So, hijinks. Michelle doesn’t want to invite Stifler (Seann William Scott) to the wedding, but Jim is coerced into it. All of Jim’s attempts to impress Michelle’s parents (Fred Willard and Deborah Rush) go hilariously awry. Stifler pretends to be a nice guy and Finch pretends to be a douche in a desperate war for the affections of Michelle’s hot sister Cadence (January Jons). Everything comes to a head as they arrive at the preposterously expensive venue that is described as “up North” from Michigan but is somehow adjacent to an ocean. 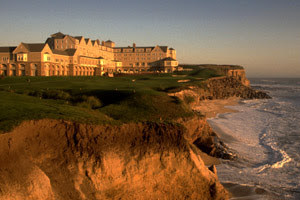 Pretty sure you’re not gonna get this view within driving distance.

A trio of rowdy bros get in the way of their earnest friend’s wedding preparations while an anxious fiancée waits in the wings… now, where have I heard that one before? Well, most recently in The Hangover, but this plot trope has been endlessly repeated in comedies since the beginning of linear time. It is trite yet pleasant, overfamiliar yet with the potential for more, but there is one thing it is not: an American Pie plot.

Sure, it provides plenty of opportunities for the old foursome (R.I.P. Oz) to engage in some sexy shenanigans, but the reckless spirit of the franchise is shackled to a set of schmaltzy plot beats and character archetypes that fit with the franchise like square genitals into a round pie. Nevermind the fact that all these characters are far too young and poor to afford the extravagant nuptials the format requires (the only one of them who obviously has a job is f**king Stifler) it yanked away Michelle, the best character in the franchise, cramming her into the role of the disappointed high society fiancée and hobbling her potential to provide the kind of shocking, anarchistic humor she’s known for.

Jim doesn’t fare much better. Although his character’s history is a much better fit for the “dopey schlub who constantly disappoints the prudish parents through a variety of wacky misunderstanding” role, he ceases to be interesting with all his googoo monologues about romance. The only indication that this movie was actually aware of its characters is the personality swap between Finch and Stifler, a joke which relies on the viewer’s knowledge and appreciation of the previous two films. 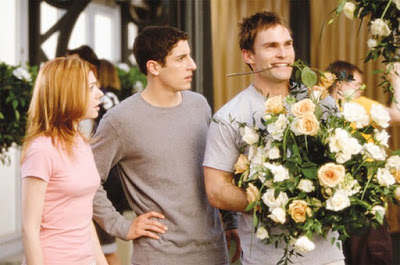 Luckily, I possess those things in spades.

As a result of this wildly keeling narrative, American Wedding becomes, almost by default, Stifler’s movie. He’s the only character not locked into position, so he’s free to have an arc, and it’s on the strength of Seann William Scott that this movie survives at all. Although his early scenes are overwritten and he flounders as the character has to force his way into a narrative that actively rejects him, he quickly gets the hang of things and delivers a set of solid gags that are some of the most disgusting and ribald in Pie history, all while handling his character’s first real emotional breakthrough. This is where he really proves his worth to the franchise, progressing beyond a one-note characterization into an actual protagonist.

Stifler is by far the funniest character here, for the first time ever, thanks to some sharp line deliveries, and it’s good he’s around because the movie flatlines whenever he’s offscreen. There is a great deal of bloat to American Wedding, with too many scenes spilling over the sides as Jim struggles to win the affections of easily suggestible idiots. These antics are far from interesting, and the faint homophobia that ran through all early-2000’s raunchy comedies bores directly into the core of the humor and spreads through the movie like a poison.

It is redeemed by some solid dialogue and the surprisingly buoyant farce that arises when Jim must attempt to hide evidence of his bachelor party, but for the most part the film is just gross and forgettable, which is something I would never have said about the first two films no matter how wild they got.

Maybe the franchise was fatigued three films in, or maybe it’s not as funny to watch actual adults hyperventilate about the possibility of seeing boobs. At any rate, American Wedding is a totally fine comedy, but it has certainly lost that sparkle that made the originals so damn iconic.