I’m impressed Hollywood figured out Seann William Scott so fast. Just one year after his auspicious film debut in American Pie, our dear SWS would appear in not one but two films as a nearly identical character. Today, let’s inspect them both and see how they fare all these years later. Plus, let’s throw in a bonus Scott feature with a twist. 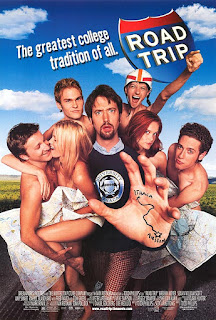 Wacky hijinks ensue when a group of college friends embark upon a road trip to retrieve an incriminating videotape accidentally sent to a girlfriend.

Road Trip is a prime example of the raunchy college movie at its most aggressively average, coasting right along on the most obvious jokes and setups available. But you’d be hard-pressed to find a subgenre I secretly like more than turn-of-the-millennium raunchy comedies, so Road Trip highly amused me.

Bizarrely conceived as a Tom Green vehicle despite the fact that he shares a scene with the film’s other characters maybe once, Road Trip gets a lot of mileage out of the disjointed narrative his inclusion requires. Green’s purpose is twofold: 1) In a framing device either conceived in reshoots or scribbled on a cocktail napkin by a  producer 12 minutes into the American Pie premiere, he narrates the story, smoothing over the more jagged edges of the vignette-based arc all road trip movies are forced into. And 2) he provides some of the f**king weirdest cutaways in motion picture history.

Presumably under studio mandate to include as much Tom Green as possible, Road Trip constantly cuts away from its routine raunchy antics to Green’s Barry, either alone or with a gaggle of extras. This character is unquenchably deranged and grows more so as the film goes on, expressing fervent interest in a mouse being devoured and participating in chaste yet unspeakably lewd acts with freshmen. This brings a dose of pure, psychotic energy to this otherwise predictable road comedy.

I’m not sure how much I like Tom Green in this movie, but I’m certainly fascinated by him, and that’s just as good. And it’s not like the rest of the film is bad, it’s just not as inherently interesting. There really is a good ensemble here, with Seann William Scott providing the lusty foil to Breckin Meyer’s bland hunk of white bread, Paulo Costamo bringing a rate humanity to a role that somehow asks him to be both a smart guy and a stoner, and DJ Qualls portraying a goofy nerd, the role he was genetically designed in a lab to play. They’re all given a chance to shine, and even if the characters aren’t as well-etched as in other films of this vintage, they each have a distinct arc was we follow them on this cross-country journey. 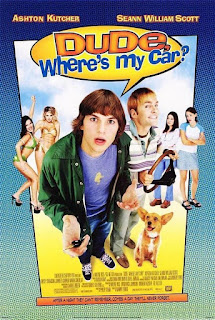 Two stoners who can’t remember the events of last night’s party must piece together what happened in order to find their car, their anniversary presents, and a device which will determine the fate of the universe.

Of course, I’m also not a stoner, so without the benefit of being high myself, some of the humor hasn’t aged particularly well. There’s some of the obligatory juvenile material, of course, which is sometimes sublime (their burnout perversion of Abbott and Costello with their “dude” and “sweet” tattoos) and sometimes just too dumb to defend (Jackal the Stoner Dog). But really the biggest issue is a handful of racist and transphobic gags that jangle a bit too harshly. 2000 is a bit too recent to earn the “that’s just how they did things back then” excuse. Even if this does lead to the never-thought-I’d-see-the-day makeout moment between Scott and Kutcher, I could live without it. It’s just too rough to handle in 2016.

I’m giving this the same score as Road Trip because there were more genuine laugh-out-loud moments (like a bit of slapstick using military hand signals that still has me giggling like a loon), but overall it feels less like it earned it. Andy Dick’s cameo in this one (yeah, he was in both movies, because 2000 had no clue what it was doing) is less organic, they keep trying to make the clunky slang term “shibby” happen, and the third act gets too bogged down with its weird commitment to being a sci-fi action movie all of a sudden.

But hey! There is easy chemistry between Scott and Kutcher (although history would give the charming SWS much better scene partners in other films) that drives the zany material with easygoing joy and unexpected warmth. And the world of the film is like a fairy tale, full of delightfully cartoonish characters and a truly out-of-control score that accompanies every little action with a little Mickey Mouse theme. It’s a fun place to spend an hour and twenty minutes, if you can ignore the less tasteful aspects of the comedy.

Jay and Silent Bob Strike Back 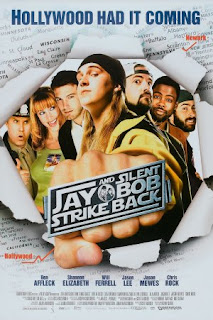 Jay and Silent Bob, alleged fan favorite characters from Clerks, take a road trip to Hollywood to stop Miramax from making a movie based on a comic book starring them.

Jay and Silent Bob Strike Back is technically a qualifying entry in two vague Popcorn Culture marathons, but let’s start with the one I have the most interest in at least attempting to complete: Seann William Scott. His role is tiny here, one of the dozens of celebrity cameos that cascade upon this preposterously budgeted movie, yet it doesn’t get lost in the noise. Playing the total opposite of his horndog lothario archetype, he is the only actor not playing a parody of themselves who manages to utilize his established persona and create a character who chafes against that to evoke comedy before speaking a single line. It might be a small part, but it’s a great tile in the mosaic of an undervalued career.

Now for that second, more detestable marathon: Kevin Smith. This is the third Smith film I’ve seen, and while it was my favorite, I dearly hope it’s my last. His View Askew-niverse is just an endless slew of callbacks to movies I didn’t like in the first place, so it’s hard to appreciate the zany world-building at work here. I just don’t grok Kevin Smith’s whole deal, but there is one thing that keeps J&SBSB afloat for me: It’s an early-2000’s Miramax project.

Miramax has a major hit with Scream in 1996, prompting a tidal wave of postmodern meta movies. As a long time opponent of the fourth wall, the wholesale dismantling of it during this period was music to my ears. Jay and Silent Bob came a year after the goofy Hollywood satire of Scream 3, and while that’s my least favorite of the franchise, I love how they’re essentially sister films (aside from being concurrent Miramax productions about the making of a Hollywood film, they both also feature Carrie Fisher, Wes Craven, Ghostface, and Jay and Silent Bob). That was enough to propel me through what was otherwise an enormously forgettable road trip comedy.

I shall be incredibly generous to the film by forgiving the homophobic throughline that rages beneath the entire thing by chalking that off to the comedy whims of the time period, but the thing about fart and boner jokes is that they still need to be structured as jokes. The mere existence of farts and boners isn’t inherently funny. And when the film actually does make jokes, it has a compulsive need to indicate this, ruining an already juvenile joke around a forced “clit” pun by taking it one fantasy-breaking step too far and at one point literally having Jay chuckle and mutter “That’ funny.” There’s no trust in the audience’s intelligence whatsoever, which is probably because it’s a mighty dumb flick itself.

And man oh man is there a dearth of talented actors at the core of this movie. The most grounded, believable performance comes from a freaking orangutan. And when the second best performance comes from the director himself, (Smith doesn’t do much, but he’s up to some clever business in the background of certain shots), you know something has gone terribly wrong. No film should be forced to hang on the shoulders of Jason Mewes, whose explosive overacting desperately clangs against the script, mounting with irritation every time he utters the perplexing, forced catch phrase “Bong!”

Luckily the cameos are generally good to great (especially Matt Damon and Ben Affleck as themselves – though curiously Affleck is lifeless when asked to play an actual character earlier on) and the movie is pretty much all about them. Its vignette structure is breezy enough to be goofy fun, even if so much of it is a swing and a miss by a mile.