Popcorn Kernels: Nobody Puts Baby Jesus In A Corner

It turns out, if you’re secular or just religious with a good sense of humor, there’s nothing more hilarious during the holiday season than evangelical Christmas movies. Here’s hoping you have a merry Christmas if you celebrate it. My gift to you is two of such Christian cinematic delights.

[EN: It’s almost impossible to give legible scores to good-bad movies of this magnitude, so bear with me. Things are about to go a little haywire.] 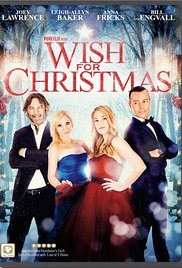 When a young girl’s selfish wish for her parents not to believe in God comes true, she must learn the true meaning of Christmas to return things to normal.

You gotta love Christian movies where God actively grants wishes, touting evangelical values while pretty much defying established doctrine. But hey, I’m not a theological scholar, so I’m probably not qualified to make these judgment calls. Maybe God is a genie. But it just seems like the wrong foot to start off on when you’re trying to promote traditional beliefs and values. Although, all the feet that follow the start are also wrong, so maybe I shouldn’t get hung up on just the first one.

Frankly, Wish for Christmas is hilarious, presenting a gloriously overwrought false dichotomy. If you’re not a conservative Christian who balks when a girl shows her shoulders, that mean’s you’re a misanthropic money-grubbing snake who convinces your daughter to get a belly ring and joins the infantry of the War on Christmas by ceaselessly chanting “Happy holidays!” (I’ll never understand why acknowledging that the likes of Hanukkah exist is a bad thing – Christmas is still included in there, folks!). Oh, and you’ll become so cruel and business-minded at your law office that you’ll fire your terrible employee who sent legal documents to the opposition and had a nervous breakdown when you asked her to do two things at once! The alternative being… giving her a trophy and a plate of cookies?

The fun thing about these movies is that they usually paint non-Christians with a monstrous brush, but they accidentally depict actual Christians as total chumps. Neither of those things are true, but you gotta love that wholehearted dedication to failing at an argument.

But don’t worry, Wish for Christmas fails just as epically at being a movie. Of course there’s an abortive arc at the center of the film, where the teenager seems to have already learned her lesson the second her wish is granted. And a panoply of Wise Old Gurus who teach her lessons that you halfway expect to vanish into thin air when you turn around.

But we already know the script is riddled with flaws. What I would really like to discuss is the massive incompetence in the rest of its construction, which gives it an air of hilarious bad movie grace I haven’t seen in a good long while. The extras are just bananas at all times (there are conspicuously never enough to fill any given scene, but they always seem mismatched to their actual environment e. g. church is filled with kids but a barn dance is populated by elderly retirees), the girls attend what might be the worst party ever recorded and have a blast, and the acting is pretty universally atrocious.

And the only thing that might be considered by any stretch of the imagination “good” if only because it’s truly inexplicable are the handful of scenes where Joey Lawrence and Leigh-Allyn Baker (as the afflicted parents) have a chance to be alone together, spouting some ludicrous dialogue but selling it so hard by maintaining a breezy, pleasant comic chemistry. The inexplicable script combined with their lived-in relationship is frankly exquisite. It’s a real blast to pick apart. Even though I didn’t love it as wholeheartedly as a Troll 2 or The Room, it’s a lovely experience to sit down with a couple friends and riff all over Wish for Christmas. Highly recommended. 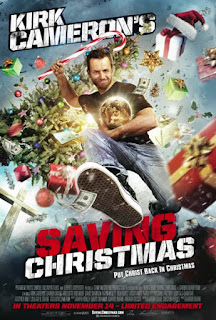 Kirk Cameron has an earnest conversation with his brother-in-law Christian, who is feeling down about the materialism of Christmas.

There could hardly be a more common plot structure in evangelical fiction. A transparent Straw Man is being a Grinch and must be taught the true meaning of Christmas. But this is Kirk Cameron we’re talking about, and he’s deathly allergic to doing things by the book. So, to put a festive spin on Saving Christmas, apparently he slammed back a pint of ayahuasca, grit his teeth, and set about making this evangelical Christmas film a pro-materialism polemic.

Words cannot describe how ludicrous – perhaps actively blasphemous – Saving Christmas is in its pseudo-religious justification for all the trappings of an upper-middle class Yuletide celebration: the Christmas tree, Santa Claus, and the greedy unwrapping of mile-high stacks of presents. “B-But, Wikipedia told me those are Pagan rituals!” yelps the Straw Man, mouth a-sputter, snot glistening from his heretic nose. He’s right, by the way, and the movie fails to realize how much more evidence and clarity they give to his argument, hoping they can bury it under several kilotons of Robin Williams-style vamping (incidentally, this character is played by the film’s writer-director, and he gives himself license to get preternaturally unhinged).

So, after some excruciating anti-comedy involving Token Black Friend Diondre babbling for approximately 9 hours about office politics at a job we’re unaware of that never get resolved and a certain keenness to stay on Kirk Cameron’s face as he reacts for a full minute to unfunny punchlines, further deflating any microscopic threat of genuine entertainment, Kirk and Christian sit down in a car for their film-long talk. Kirk’s explanations are presented via lifeless static shots that fade out, then back in on themselves. It wouldn’t get a passing grade in an elementary school documentary class.

Frankly, this interminable section would be utterly miserable if it weren’t for two things: 1) These explanations are absurd, desperately grasping at straws (“Um… swaddling cloths are like… parallels to the resurrection? So we need nativity snowglobes, which I feel the need to explain for some reason, even though they’re the only explicitly religious thing in the whole movie. And the Bible had trees, ergo Christmas trees. And Adam was the first Adam so Jesus was the last Adam and.. Wait, what was I talking about?” Your brain just loses its grip halfway through any monologue. It’s like listening to Kellyanne Conway speak), and 2) stuff gets cray, and eventually a dubstep Saint Nick kicks the sh*t out of a dude in a bar.

Then the film ends with an extended hip hop dance number, because why the hell not? Saving Christmas is a holiday treat, with every part acting in conjunction with the others to create a truly execrable entry in the cinematic canon. The acting is atrocious (Kirk Cameron is terrible, flapping his hands around like he’s making up his own interpretive dance about his dialogue, but he’s a damn sight better than the mawkish Darren Doane or his own sister Brdgette Cameron, who makes the same sour, disdainful face for ten straight minutes, slowly rotating it so we can see every possible angle), the script is a nightmare (aside from the D-level arguments, it’s peppered with “dudes” and “bros” in a bizarre attempt to humanize the characters), and the cinematography is either tripod static or caffeinated squirrel shaky, at one point shifting focus in camera between people in the background and foreground having a conversation, one of my favorite hallmarks of trash cinema.

Frankly, it’s a delight. To paraphrase Saving Christmas itself (in a line describing the original Saint Nicholas), this is a bad, bad movie. Bad in the good way.