I always try to give full-length reviews to current movies, because I assume they’re the ones readers will be most invested in. But every December I race to catch up on the flicks I missed during the year and my backlog gets clogged like a yeti’s shower drain. So please forgive me as I knock out a couple of mini reviews for 2016 titles I don’t have particularly strong feelings for and came out long enough ago that I don’t feel guilty about cutting them short. 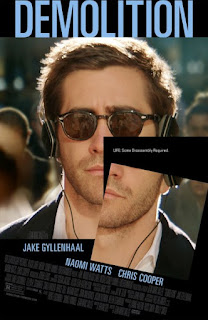 A man loses his wife in a car accident, so he starts to take apart everything in his life to figure out what he needs to be happy. It makes sense in the movie, I promise. Sort of.

Imagine, if you will, that the kid from Donnie Darko grew up and got an actual job and a wife. There, you’re about halfway to the anthropomorphic pretention that is Jake Gyllenhaal in Demolition.

Demolition tries so hard to be an Important movie abut grief, life, and truth that it forgets to craft characters who aren’t one-note assholes. It’s like the folks from jackass accidentally stumbled into a Terrence Malick film. Gyllenhaal does a fine job even though his character is one centimeter away from going full American Psycho and the movie doesn’t seem to realize it. Then he hangs out with a terrible woman who threatens to be a love interest until he meets her terrible son and she ceases to exist.

Demolition is almost episodic in its carelessness, forgetting about what came before in pursuit of higher and higher melodrama. But it drowns itself in overwrought narration and a mise-en-scene that shrieks to be noticed with obvious lighting shifts and pointed, almost huffy framing. This is a movie that frequently cuts to slow motion shots of a beach for no reason before it pulls another card out of its Cliché Plot Devices deck.

It’s not terribly made. It’s just frustrating to sit through; a startlingly empty drama that gives the impression that it might be deep. Looking through my notes, I already can’t remember half of what I wrote down because the movie slips through your fingers like uninspired sand. When the most interesting thing in your movie is watching as Jake Gyllenhaal slowly grows a beard, maybe you’re not destined for the Oscar you’re so desperately making a bid for. 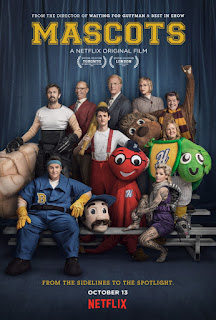 Christopher Guest is a very funny filmmaker. His ensemble improv comedy films are delightful treasures packed to the brim with genuine talents, but unfortunately he hasn’t made one since 2006. Now, ten years later, that has changed with the Netflix exclusive Mascots. But maybe there was a reason for this decade-long radio silence. If Mascots is any indication, the format has gone stale.

Maybe this is because the comedy genre has shifted so much, folding improvisation into more and more run-of-the-mill movies thanks to the influence of Judd Apatow and Paul Feig. It’s no longer a fresh, exciting style but rather something normalized, almost mundane. Or maybe we just don’t have much need for the slower-paced naturalism of Guest’s filmography that allows his characters to breathe. Or maybe, like all brilliant filmmakers, he just produced a dud, a one-time embarrassment to be swept under the rug as we move on.

The characters: Unhappily married mascot duo Mike (Zach Woods) and Mindy Murray (Sarah Baker) – take my “take my wife” jokes… Please!; Owen Golly Jr. (Tom Bennett), a British mascot who feels pressured by his father to carry on the family legacy; Cindi Babineaux (Parker Posey), a possibly incestuous crypto-lesbian who performs interpretive dance pieces while dressed as an armadillo; Tommy “Zook” Zucarello (Chris O’Dowd), an Irish-Canadian ice hockey bad boy; and Phil Mayhew (Christopher Moynihan), who plays a mascot plumber. And that’s not even scratching the surface what with the hangers-on, family members, judges, TV executives, and so on that flesh out this hideous, bulging pustule of a cast.

These are very funny actors and thus they produce a handful of funny scenes, but that’s just not enough. There’s a severe lack of focus in this narrative, and when the jokes are mostly in the vein of the tired (nay, exhausted) sitcommy trope of “marriage sucks” or the overdone “stay in the family business” plot line, there’s not a lot to lean on when the movie does touch down on one subject for more than a couple seconds at a time.

Then, for the final half hour, Mascots throws all pretense of plot away for an extended sequence of mascot performances. Some are downright hilarious but by the halfway point of this grueling segment, the movie becomes just as banal as the competition it’s supposed to be skewering. In the end, it’s just difficult to tell why they expected anyone to care.