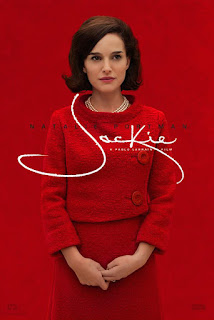 If I’ve said it once, I’ve said it a thousand times: biopics are not my genre. But I can find it in my heart to respect any movie in any genre if it’s well made and tells a good story. But if you’re a biopic nut and intensely invested in the well-being of Jackie, Pablo Larraín’s film about Jackie Kennedy in the week following her husband’s assassination, you may want to chalk up what I have to say to a good old-fashioned bias. Because this inevitably Oscar-nominated film is one of the least deserving of that honor that I’ve seen in years. 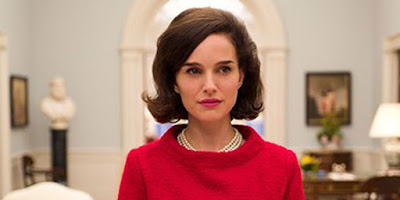 And I saw The Revenant!

For what it’s worth, Jackie tells a story with interesting goals. Jackie Kennedy (Natalie Portman) is caught up in a flurry of tangled emotions after the assassination of her husband John (Caspar Phillipson). These flashbacks are intercut with her interview with a journalist (Billy Crudup) a week alter. As she waffles about the funeral arrangements, her own safety, and her husband’s legacy, she struggles with the sad truth that, with her husband gone, the government has no more use for her. 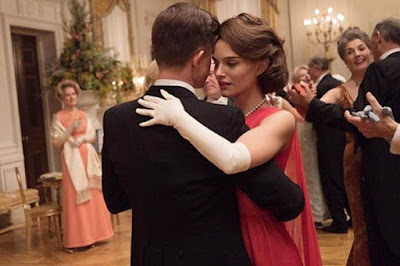 I do love me some feminist politics in my movies.

Nobody is pretending that Jackie is shooting for anything other than a Best Actress nomination, and that’s probably a good thing. Natalie Portman is by far the best asset of the entire project, although she’s doing a great imitation rather than giving a particularly stunning performance. To be fair, the script really doesn’t give her much to do other than constantly reassert her grief, either in bouts of gorgeous, half-composed weeping or shattered flightiness. She does it well, but there’s not really anything more to the role. A major theme of the film is the difference between reality and the fairy tale figures we see on the news, but other than certain moments of shrewd calculation, we’re not given much of a glimpse into Jackie’s inner life.

But who knows. Maybe this is a piercingly accurate portrayal and I just have a problem with Jackie Kennedy herself. Let’s move onto the things we can all agree are terrible, like the score. I don’t blame Under the Skin composter Mica Levi for turning in a piece so similar to her standout debut, but the atonal shrieking of the orchestra shatters the tone. Jackie is a stone-faced biopic, not a gothic horror film. These wailing strings would have Bernard Hermann asking her to tone it down a bit.

But the banshee parade that marks the bulk of the movie sounds like Phillip Glass compared to the maudlin piccolo suite that accompanies the scene where Jackie informs her children of their father’s death. It’s like having a gallon of syrup upended over your head, sticky and oversweet in all the wrong ways. 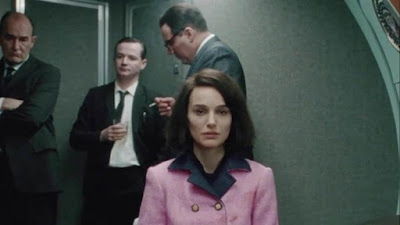 And it has even less nutritional value.

Nothing else in Jackie is as obnoxious as the score, but most of it is just as self-confidently misguided. Larraín has a bizarre predilection for tight close-ups and nothing else, locking his frame onto whoever’s talking and interring any energy that has built up until this point. Which isn’t much, considering that Jackie is an ice-cold biopic with a dedication to crisp, starched period detail over its characters themselves.

It’s not that Jackie doesn’t try. Oh boy does it try. It just leans hard on its script, which is a mushy, didactic slog if there ever was one. There is some pleasant humor in the easy chemistry between Portman and Crudup in the interview scenes, but the rest of the film is a conveyor belt of deep, thematic conversation setpieces. All of this is to be expected, even welcomed, in a film with this kind of subject matter, but they had to go ahead and splice in half a dozen scenes of Jackie on a lakeside taking to a priest (a sleepwalking John Hurt), a pacing-obliterating set of moments that shatters any pretense of subtlety.

Not that we needed to be reminded that this movie isn’t subtle. After their demure avoidance of the actual assassination in the opening hour, the filmmakers decide to stomp on the gas and launch into a faithfully grisly restaging of the event. Being me, I rarely find reason to argue against an infusion of gore in my movies (I still think Citizen Kane could have been spiced up with a couple beheadings), but this is just crass. They’ve already handled the subject using elegant, harrowing implication, and this far into the movie, seeing JFK’s brains sliding out of his head just doesn’t add anything to our understanding of Jackie’s mindset, the only thing that matters in this film.

This is a symptom of a larger problem. Jackie doesn’t know when to stop. It thinks it’s telling an important story (and it would have been if it paid any attention to its own themes), but it’s just a pale imitation of what a biopic should be. Natalie Portman will get her nomination and she’ll deserve it, but Jackie doesn’t deserve a single paying eyeball to witness its overwrought trainwreck.

TL;DR: Jackie is a ludicrously overwrought biopic with a solid theme that it totally ignores.
Rating: 4/10
Word Count: 885
Also sprach Brennan at 8:15 AM