This'll Be The Day That I Pie 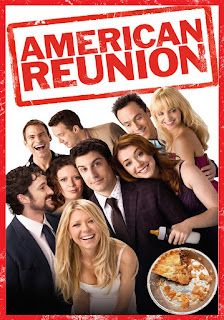 Well, here we are. I may have skipped way ahead in our Seann William Scott marathon, but of course that was only a pretense to allow me to watch the American Pie movies again. So that brings us to American Reunion, the fourth and probably final film in the franchise, coming a long 9 years after American Wedding. Let’s see if this Pie has gotten stale. 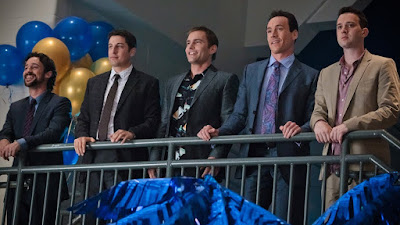 Pro-tip: if a pie has been sitting on a windowsill for a decade, maybe don’t eat it.

In American Reunion, the denizens of East Great Falls return home for their not-quite ten year high school reunion. Jim (Jason Biggs) and Michelle (Alyson Hannigan) now have a two-year-old son; Oz (Chris Klein) is back from the dead and a B-list sportscaster/celebrity dance show contestant who’s dating sexy nymphette Mia (Katrina Bowden); Finch (Eddie Kaye Thomas) has arrived with an array of globetrotting tales; and Kevin (Thomas Ian Nicholas) is just happy to be included. They plan to spend a nice, quiet weekend catching up before the reunion. Enter Stifler (Seann William Scott). Frustrated by his job as a temp, he wants to have a wild, crazy weekend just like they did back in high school.

Thus our aged foursome is tempted away from their wives and boring jobs by various women and the rekindling of old flames. Oz and Kevin run into their exes Heather (Mena Suvari) and Terrible Vickie (Tara Reid), who is terrible, Finch woos band geek-cum-sexy barmaid Selena (Dania Ramirez), and Jim must resist the advances of Kara (Ali Cobrin), the lithe now-eighteen-year-old he used to babysit. 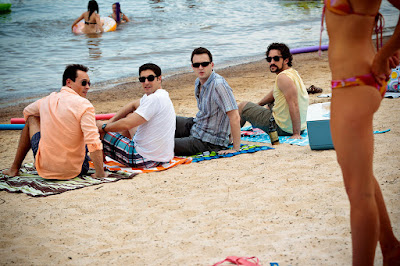 And thus they continue to act like they’ve never seen boobs before in their entire lives.

Remember that thing I said about the first American Pie where the women were actually fleshed-out, sexually autonomous characters? Well, apparently the law of diminishing returns also applies to quasi-feminism in raunchy movie franchises. The rule of thumb still holds true in that an American Pie film’s quality is directly proportional to the screentime of Alyson Hannigan’s Michelle, and Reunion takes after American Wedding in the misuse of that iconic character. Once again she is crammed into the role of “Wife,” the woman who must be kept unaware of the boys’ sexual misadventures, as if she wouldn’t have been right in there with them.

And frankly, most of the other female characters don’t even make sense. I get it when Terrible Vickie is terrible, because she’s terrible, but why the hell would Heather get mad upon seeing Oz macking on his live-in girlfriend? Why would Kara have any sexual interest in Jim (no offense, but c’mon), especially with such rapacious determination? And why does Michelle threaten to pack up and move in with her grandmother the second Jim commits a sexual misunderstanding, something that has become – like – a full time career for him at this point? I think this all boils down to the biggest problem with the later films in this franchise: These adults are still written like teenagers.

Obviously adults can get into sexual hijinks, probably even more so than your average high school student. But the motivations here are so childish and crudely motivated, they make way less sense when transplanted from the locker-filled halls of Long Beach Poly to a family cul de sac. 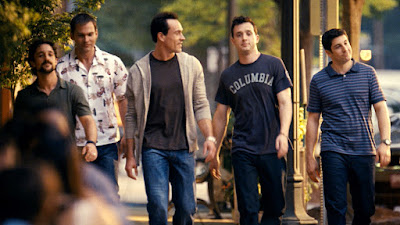 At least American Reunion has reassembled its core cast (including cameos from Natasha Lyonne, Shannon Elizabeth, Chris Owen, and a slightly expanded part for a finally famous John Cho, who appeared in all 3 American Pies before hitting it big with Harold & Kumar), so it feels more like a legitimate continuation than the stunted Wedding. And you can rarely go wrong with Seann William Scott’s Stifler, the only character whose actions make any sense as he yearns for the glory days of his teen years. His mugging overreactions and faux charm still hold some juice, once again bringing most of the best laughs by the bucketful.

And American Reunion is funny. At least enough to justify its own existence. The bright colorful characters of the original film have become shabby and patched (especially Eugene Levy as Jim’s Dad, who they can not find a use for here, shoving him into a shopworn dress-up montage that stops the movie cold), but the situations they find themselves in are still reasonably diverting. And this is the first film in the entire dick-obsessed franchise to actually show a penis – if only for a second – so I applaud its audacity at the very least.

Unfortunately though, for the most part American Reunion is just a retread of the lackluster American Wedding (although there are fewer gay jokes, thank heavens), only with Neon Trees on the soundtrack instead of Sum 41. This one-two punch is good enough not to totally sink my esteem for the franchise (those first two are just too good), but I don’t think I’d mind if this was the last slice of Pie. There’s no reason to revisit these characters in their current, destitute state.