Songs Of The Wild 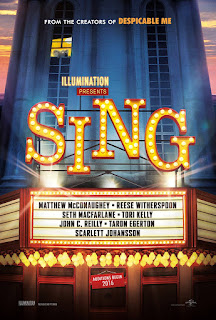 The Illumination Entertainment brand kicked off with Despicable Me and never looked back, to the point that it seemed like the company was incapable of creating a movie (or, at least, a good movie) without the involvement of the Minions, the adorable little yellow buffoons that ignited a pandemic among local retail stores and toy boxes. Sing is probably their heartiest bid at creating a new brand yet, what with its Zootopia-esque world of anthropomorphic animals, and it more or less works. 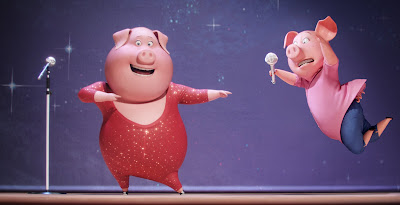 If you can’t make kids enjoy a movie about cartoon animals, I hear they’re hiring at the 7-Eleven.

In the plot of Sing, which was engineered in a laboratory to appeal to the widest demographic possible, cartoon animals are holding a singing competition, performing covers of pop songs. This is a show put on in the Moon Theatre by its owner, the roguish koala Buster Moon (Matthew McConaughey) who just wants to keep the crumbling building (and his dream of owning a theatre) afloat. Due to a typographical error promising $1000,000 in prize money that he doesn’t have, animals throng the theater, excited to participate.

The contestants have all joined for their own reasons: Rosita the Pig (Reese Witherspoon) – who is paired with the shamefully amusing German provocateur Gunter (Nick Kroll) – wants to prove to her lazy husband and 25 kids that she’s more than just a frazzled housewife; Mike the Mouse (Seth MacFarlane) just wants to be rich and spend the money on the closest analogue to drugs this kids’ film can afford; Johnny the Gorilla (Taron Egerton) wants a career path away from his father’s gang and to raise his dad’s bail; Ash the Porcupine (Scarlett Johansson) wants to use the money to build a recording studio for her rocker boyfriend Lance (Beck Bennett); and Meena the elephant (Tori Kelly) – who initially joins as a stagehand – wants to overcome her shyness and share her gift with the world.

They all want the money, but they find that the power of music and dance that unites them is the most precious prize of all. 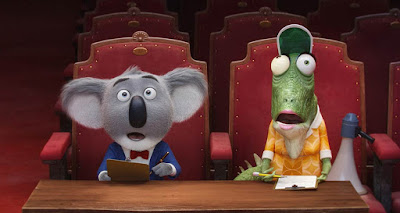 And I’m uncannily reminded of how great La La Land is in comparison.

Ask yourself one question: Would you enjoy a movie where animals sing songs? There, you have your answer about whether or not you should see Sing. Case closed. It doesn’t hide what it is, and it’s a totally fine bit of disposable entertainment. If you’re looking for a story though, good luck. The contestants are engaging enough, but they’re a rough assemblage of tropes that indicate characters rather than committing to fleshing them out. Look, shortcuts are necessary if you want the last half hour to be a full concert and keep the run time at a length reasonable enough that children’s attention spans don’t explode.

At the very least, there were wacky little quirks tucked into the corners here and there, enough to keep my attention occupied during the story bits. I especially love the score that calls back to 70’s heist movies whenever Buster pulls his Music Man huckster act. And the fact that they dug up the Beatles deep cut “Golden Slumbers” is certainly a boon to getting me on their side. Then Sing goes bananas during the close of the second act, unstoppering a sequence that’s part-Titanic, part-Final Destination, all massively inappropriate for young audiences, but so bizarrely out of place that it’s truly captivating.

Yeah, Sing is survivable if you have kids who want to see it. Those musical numbers are pretty fun. But if you want to watch a world of anthropomorphic animals where they feel truly integrated in with humanoid society, just watch Zootopia. And frankly, the jukebox musical conceit worked much better in last month’s Trolls. But Sing is a solid stab at non-Minion entertainment that gives me more hope than their abortive Secret Life of Pets, and that’s good enough. 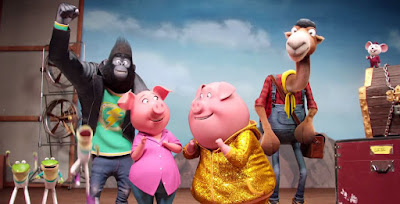 It could have used more Minions though.

Of course, Sing is also filled with fart humor and other juvenile attempts at comedy that stomp allover Japanese culture and African-American stereotypes, as well as throwing in a coded gay frog for a joke that blatantly misses the obvious punchline, so it’s double irritating. But whatever, man. We takes what we gets with these guys.

The stars are charming, the pacing never flags, and you don’t feel like you’ve wasted your time when the credits roll. Sometimes that’s the best you can hope for, and you don’t need to dread being dragged to this should the opportunity arise over the holidays. You won’t catch me singing Sing’s praises, but I enjoyed myself.