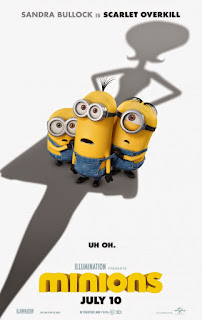 Two films came out this weekend. One was about an eternal, murderous presence laying ruin and waste upon all who come across it, and the other was The Gallows. I’m not kidding when I say that – of these two films – Minions left the most lasting emotional scars. Children’s films have a long history of embracing the macabre*, but it’s been a long time since I’ve seen a kiddie flick so grimly invested in depicting murder, torture, and mayhem.

It’s all tangential of course, like in the equally inexplicable Seinfeld insect massacre classic Bee Movie, but it’s quietly alarming all the same. And that’s but one facet of the massive, hyperactive, inert conglomerate that forms the sweaty, heaving, surreally self-deluded mass that is Minions, the spin-off of the Despicable Me franchise that focuses on its most marketable and least narratively viable characters: the thousands of tiny yellow sight gags that bumble around Gru’s villainous laboratory.

*I still have physical injuries from the tunnel scene in Willy Wonka and the Chocolate Factory. 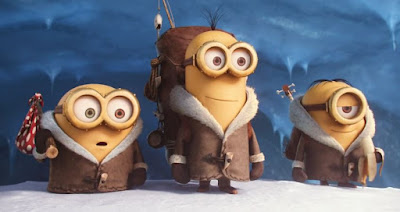 Minions tells the story of three Minions in particular, who set off in 1968 to find a villain to serve and thus save their tribe from extinction: Kevin (director Pierre Coffin), the headstrong leader, Stuart (director Pierre Coffin), the lazy musician, and Bob (renowned egotist Pierre Coffin), the obligatory Dumb One. Bob has a teddy bear named Tim who you will grow to love far more than any of the malign growths we shall henceforth call characters. Through a series of delightful (to someone, I’m sure) misadventures, these Three Minionteers end up in the service of the baddest villain in all the land: Scarlett Overkill (Sandra Bullock), and her groovy, gadget-peddling husband Herb (Jon Hamm).

Scarlett enlists the Minions to help her steal the crown of the Queen of England because this films feints at empowering women include her sole motivation being “wanting to be a pretty princess.” Through a series of delightful (see above) escapades, the Minions end up accidentally overthrowing the monarchy. Scarlett hangs out in her lair while this is happening, because Sandra Bullock doesn’t come cheap. Beyond this, I’m at a loss to explain the plot because there really isn’t one.

Despite its surprising ingenuity in creating a scenario for this cash-in prequel that has potential and feels organic to the universe of Despicable Me, Minions has an astonishing lack of narrative drive. It’s like a building abandoned in the middle of construction. The framework is there, but the wind echoes hollowly through it. 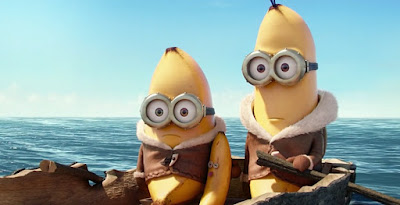 Coincidentally, that's the title of my upcoming poetry collection.

It’s a curious thing. Show the opening scenes of Minions to any producer or screenwriter worth their cocaine and they could fill in the rest, giving you a generic but marketable movie: Kevin wants to save the tribe himself. Bob and Stuart accidentally save the tribe. Kevin learns to swallow his pride and value teamwork over fame and recognition. Bam. It’s treacly but its sells.

And that’s clearly where Minions wants to go, but despite its obvious setup, it forgets its purpose, sloughs off any recognizable conflict or resolution, and sets its villain on a bungee cord of incomprehensibly shifting motivations, all in order to fit in a series of scatological gags, high-pitched jabbering, and heaps upon inexplicable heaps of nostalgia for a franchise that began a scant five years ago and has only had two films, only one of which was any good, all of which relies on an interminable series of jokes extrapolated from literally one line in the first film about bananas. 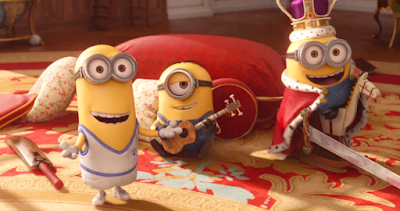 That would be like a Star Wars spin-off all about Wookies playing chess.

That said, Minions isn’t all bad. It’s shallow and childish, of course, but it’s family entertainment in 2015. We’re not exactly re-animating Walt Disney’s frozen head here. Relying heavily on the cultural touchstones and iconography of the 1960’s is a peculiar touch, considering that this film’s target audience was still in diapers when Britney was shaving her head, but it provides a quirky, groovy backdrop for some of the film’s silly humor.

Here’s the thing, though. The Minions were consistently the breakout stars of the previous two films, but - as we have constantly been failing to learn, seeing as we got a second season of Joey – giving a beloved side character an expanded role is an exercise in despair. Where the Minions were charming in small doses, here they are wan and overwrought, wrung out and exhausted of every last ounce of their potential. They still show glimmers of their previous buoyance, but are crushed by the sheer weight of the material they are called upon to perform. 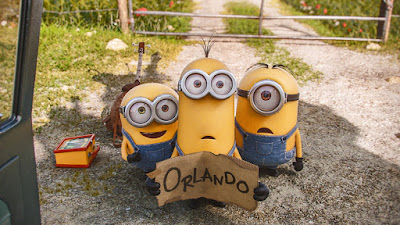 Kind of like Britney, actually. Maybe that’s why they’re bald.

And, of course, it wouldn’t be a Despicable Me flick if it wasn’t trafficking in hideously distorted stereotypes! Nobody is safe from the broad scope and closed mind of the film. The British, of course, get a thorough dress-down, as is to be expected (nobody cares), but Minions also goes out of its way to mock the Indians, the elderly, and the gays before the credits roll, fret not. Before this franchise is buried in its tiny yellow grave, it’ll have achieved a blackout on its minority bingo card.

It’s a shambling disappointment to say the least, especially after the trailers made it look like maybe somebody tried even a little bit to make it palatable. The best thing I can say about the film is that it at least provides us a solid Jon Hamm performance, though he is forced to deliver lines across from Bullock who is phoning it in something fierce. Heck, she’s texting it in for everything but the lines they play in the trailer.

What I’m trying to say is that I like the Minions, the characters. I really do. But I did not like Minions, the film. I don’t suppose there is any reason on Earth that anybody with more than a single digit in their age should particularly want to go see this film anyway, but if you do, stop. Just watch Despicable Me again. Give Steve Carell your money, not this pile of squeaky toys masquerading as a film.

TL;DR: Minions is a spectacularly messy, plotless, if slightly charming kids' film.
Rating: 4/10
Should I Spend Money On This? No.
Word Count: 1078
Also sprach Brennan at 9:32 AM