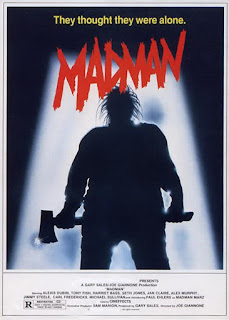 The slasher film has always had its flaws, even during the golden years of 1980 and 1981. That’s the nature of a genre built on the credo “if you built it and slop twelve cents of red paint onto it, the box office will come.” But the genre as a whole hit its first big stumbling block in 1982, the year following the slasher’s period of highest quality – and market saturation. It wasn’t enough to be a meat and potatoes hack and slash picture anymore, but producers weren’t quite on the cusp of realizing that.

Enter Madman. Released on New Year’s Day in 1982, it was the second 80’s slasher film to be based on the Cropsey campfire legend (after the superior The Burning), the fourth 80’s slasher film to be set at a summer camp, the ninth 80’s slasher film to take place in the forest, and the fifty-ninth 80’s shlasher film in general. In short, it was nothing special. In long, it was a tedious, wretched exercise in the least interesting slasher tropes meted out in a hideously incompetent manner, redeemed only by an inexplicable profusion of scenes so incredibly strange they can’t help but be arresting. 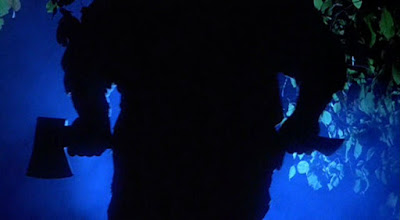 I don’t know what I expected.

The platter of Meat includes Betsy (Gaylen Ross of Dawn of the Dead, under a fake name so she won’t be embarrassed, and keeping a studiously blank face so she won’t accidentally be mistaken for an actress), a translucent blonde who is the main character for some inscrutable reason; TP (Tony Fish), Betsy’s douchey boyfriend, who gags on a hideously pronounced New Yahk accent; Stacy (Harriet Bass), Betsy’s best friend, a horny sweetie who speaks in advice column platitudes; Bill (Alex Murphy), who has an Oates mustache; his girlfriend Ellie (Jan Claire), who has a Hall perm; and Dave (Seth Jones), a blondie with some exciting new ideas from Philosophy 101 class.

It’s pretty routine. The counselors bumble off into the woods alone looking for one another while Madman Marz bumps them off with whatever implements he finds handy. Meanwhile Richie makes himself completely useless and wanders around Marz’s home, watching him drag bodies around without lifting a ginger to help them. Kids these days…

Don’t lynch me for this, but I think I used to own that jacket…

Madman is not the worst slasher I’ve ever seen (Psycho Santa), nor is it the dullest (The Outing), but in fact it’s perhaps even less appealing for not being so hyperbolically bad. It’s so staunchly middle-of-the-road in every aspect that you can’t muster up the energy to hate it, but rather sit through it numbly as shot after shot filters by of one character after another ferreting around in the dark. There are a few instances of quality here and there that patch up the threadbare entertainment value enough that I don’t hate the film to any thorough degree, but it’s an awfully dog-eared entry in the genre, to say the least.

The editing is challenging in the way that digesting a week-old hard boiled egg is challenging: epic length shots of wandering bodies are jaggedly interspersed with rapid-fire close-ups of indeterminate patches of dirt with no discernible geography. It’s like a high school student’s final project where they’re attempting to pull a David Lynch but they fell asleep twenty minutes into Eraserhead. There are some admittedly pretty damn majestic silhouette shots of the killer, but beyond that everything on the filmmaking is basely incompetent.

The gore, usually the saving grace of such subpar backwoods splatter films, is likewise inconsistent. The vast majority of the kills look like a host of particularly dull, all-red Jackson Pollock pieces with two exceptions. When Tony Fish is hung from a tree, his eyes roll back and his face turns purple, in a reliable paroxysm of asphyxiation (which may or may not have had something to do with the fact that he was actually choking himself), and the grand finale in Madman Marz’s house of horrors is reliably gruesome. But it’s all too little too late after 80 minutes of grueling drudgery.

Even the acting, the last bastion of the ironic slasher watcher, isn’t quite vapid enough to mock, though I wouldn’t go so far as to call anybody genuinely good. I have too much respect for the virtue of truth and the purity of my soul to do that. Only Ross is up to anything remarkably inane, looking like she was dumped on set after major dental surgery and was performing through a dopamine haze. And Ehlers is the only cast member that attempts to do anything at all above and beyond the script, barreling around the screen and grunting like a gorilla – an effect which combines with Marz’s inexplicable rat claws to create an utterly baffling effect. But at least it has any sort of impact, which is more than I can say for any of his castmates. 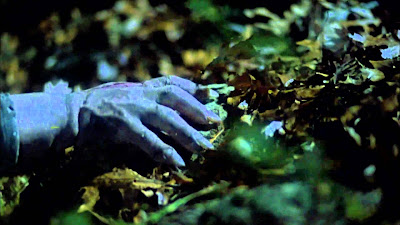 Out of all the slasher villains I’ve seen, Madman Marx is voted Most Likely to Appear in a Production of The Nutcracker.

The one truly, indelibly, unmistakably remarkable thing about Madman is this; it has perhaps the loosest grip on reality of any early 80’s slasher I’ve ever seen. Sure, late 80’s flicks get goofy and gloopy and campy, but that was in the genre’s desperate, decadent phase. Madman is a straightforward, stone-faced slasher packed to the gills with some of the most ludicrous, out of context scenes that have ever been gathered in one place. This is the film’s saving grace.

The film is full of people discovering severed heads in car engines, hiding from killers in fridges, and blowing raspberries at hillocks, all riddled with dialogue pulled from the greatest hits of fortune cookies, like “the biggest test is letting go,” or, “play the game with a fair heart and look on.” But the pièce de résistance is a three minute sex scene in a hot tub where two characters revolve around each other for two full minutes, grinning like idiots and spinning merrily in their orbits while a trashy jazz song penned and performed by the actor himself squeaks and croons in the background before they finally converge and make their way underwater.

You can’t make this stuff up. None of it’s played for laughs, and it’s all mystifyingly riveting. Unfortunately, it’s all sandwiched between those ponderously dull stalk and slash sequences, but if you’re the kind of person that I am, just reading that previous paragraph will give you an uncomfortably nasty itch that only Madman can scratch.

Plus Madman Marz has a ballad. Like Friend Hunter says, you can never go wrong with a ballad.

Killer: Madman Marz (Paul Ehlers)
Final Girl: Betsy (Gaylen Ross)
Best Kill: Stacy is decapitated with a car hood.
Sign of the Times: Seriously. Denim coats lined with white fur were outlawed after 1989.
Scariest Moment: Madman Marz swipes at Dave with an axe after he discovers TP’s body.
Weirdest Moment: I want to frame that Jacuzzi scene and put it on my wall.
Champion Dialogue: “I love to feel the flames devour the wood. Who says there’s no beauty in destruction?”
Body Count: 10
TL;DR: Madman is a dull, threadbare slasher slog redeemed only by a slate of inexplicably bizarre scenes.
Rating: 3/10
Word Count: 1374
Also sprach Brennan at 3:19 PM