Through The Fire And Flames 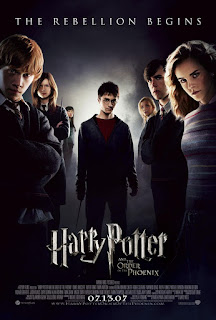 The first four Harry Potter movies are like distant relatives overstaying their welcome during the Christmas holidays. They devour the full stock of your pantry (i.e. any working British actor above “street mime” caliber), they keep you up with their excessive snoring (or rather their brobdingnagian run times), and to your consternation, they just keep coming back every year without fail.  They are all jagged, ungainly narrative detritus usually brought back from the brink of stultifying despair on the strength of a veritable army of veteran adult performers and production designers so untouchably brilliant that they could literally murder someone, make their ribcage into a lampshade, and it would be so beautiful that nobody would find any problem with it.

When last we left our heroes, it was with 2005’s Goblet of Fire, the last stage of Harry Potter’s “childish” phase. That entry was marked by a particularly devout slash and burn approach when it came to the story, leaving the film a smoldering rubble with only Ralph Fiennes standing triumphant amid the flames. But after all that painful slogging, David Yates stepped up to the plates, and like its titular bird, Harry Potter and the Order of the Phoenix rose from the ashes of the franchise, heralding a new dawn for us all. 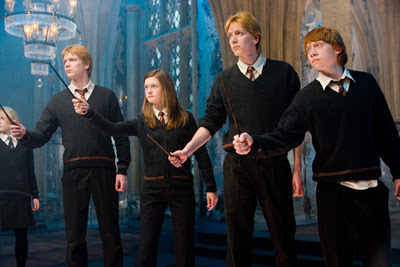 Plus, it’s the shortest film of the series. Rejoice!

Harry Potter and the Order of the Phoenix, in case you yourself are a book and haven’t grown self-aware enough to discover the concept of reading, is about the fifteen-year-old wizard Harry Potter (Daniel Radcliffe). At the end of last term, he saw the Dark Lord Voldemort (Ralph Fiennes) rise again, but the paranoid Minister of Magic Cornelius Fudge (Robert Hardy) believes that his claims are false, brought on by the promptings of the avaricious headmaster of Hogwarts School of Witchcraft and Wizardry, Albus Dumbledore (Michael Gambon). This is patently untrue, of course, but he appoints the syrupy and officious Professor Umbridge (Imelda Staunton) to the post of Defense Against the Dark Arts to ensure the Ministry’s hold over Hogwarts while he continues his smear campaign on Potter and Dumbledore from the outside.

Torn between the inordinate responsibility he feels toward the Order of the Phoenix (a secret society leading the charge against Voldemort – to which his godfather Sirius Black (Gary Oldman) belongs), the very adult bureaucratic and political pressures of the Ministry, the surge of teenage hormones and exam stress that lead to infighting with his best friends Ron (Rupert Grint) and Hermione (Emma Watson), and the sudden urges to storm off and listen to Simple Plan alone in his room, Harry is going to have a very rough year. 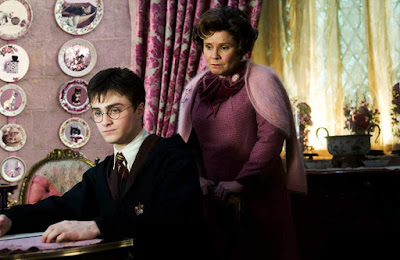 So a hawk- or particularly talented pigeon-eyed viewer may ask, how exactly does one accomplish the Herculean feat of adapting the doorstopper Order of the Phoenix into the shortest movie of the franchise? And that includes the two films that tackled only half the final book apiece, thank you very much. Screenwriter Michael Goldenberg might tell you this or that about writing while standing up or the miraculous powers of lime extract, but the answer is very simple: He actually cared about telling a coherent story that doesn’t rely on a thousand page children’s book to fill in the alarmingly huge gaps that could (and frequently did) fit a grown man.

Mind you, the storytelling of Phoenix is not airtight. Several of its marbles roll irrevocably out of bounds, most notably with the character of Tonks (Natalia Tena) who may well have been a large chocolate gateau for all the purpose she serves the film. But when narrative corners are cut (and with source material as extensive as this, it requires more cutting than a Flock of Seagulls reunion tour), Goldenberg uses pre-established elements (like alternate characters or story beats) to bridge the gaps instead of just skipping past the difficult bits like the faulty record needle of the previous four films.

In addition to the first generally coherent script of the franchise, Order of the Phoenix also boasts a remarkably adept visual schema courtesy of cinematographer Slawomir Idziak. As I said before, the films have always had nut-busting production design (a tradition continued here with Stuart Craig’s glittering obsidian Ministry of Magic and the defined yet somehow infinite complexities of the Room of Requirement), but only Goblet of Fire’s encroaching gloom came close to resembling a unifying aesthetic. Here, the knobbly yet prim structure and stolid lighting of Umbridge and her domain contrast sharply with the heavy shadows, vivid blues, and bright slashes of light that define the clutter of Harry’s reality. This helps emphasize the central conflict of the film, between the Ministry’s careful restructuring of the media narrative and the grim reality they’re hoping to conceal from the world at large as well as themselves.

Perhaps my favorite detail of the film, Phoenix in a microcosm, is the mirror in the Room of Requirement, where Harry and his friends secretly practice defensive spells under the nose of the Ministry. Over the course of the film, the mirror begins to fill up with newspaper clippings and photographs depicting the missing and the dead as Voldemort and his Death Eaters continue their wicked work in the shadows. This collection is never explicitly mentioned in the dialogue, but it fleshes out the dangerous and terrifying world that lies in wait outside the walls of the school. It’s subtle, powerful, and entirely visual, and a big part of why Phoenix is the best Potter yet. 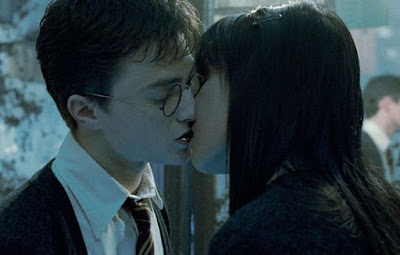 Plus, Daniel Radcliffe was 18 at this point and beginning his conversion into a fully weaponized cute person.

So, have we had just about enough of Film Major Brennan for one article? Let’s just tuck him away again until he can wax poetic about slasher sound cues where he can’t hurt anybody. Because Order of the Phoenix is also a remarkably fun movie. It’s dark, brooding, and deals with mature themes, yes, but it’s also a school rebellion flick. There are moments that capture that summer camp rush of subversive mischief, finally giving the caretaker Filch (David Bradley) something genuinely amusing to do, and allowing the ensemble – especially Neville Longbottom (Matthew Lewis) and newcomer Luna Lovegood (the incomparably dizzy Evanna Lynch) – to truly inhabit their roles and create a living tapestry to support Harry and his exploits.

The acting is likewise much improved, especially after the discouraging Goblet, which almost led to a series of costly psychotherapy sessions. Emma Watson’s eyebrows still clearly long to be set loose in the untamed wilderness, but as a whole, the trio at the core are improving markedly as they age, and the adult performers are back on track as the fossil fuel that keeps the engine running smoothly.

Alan Rickman and Maggie Smith carry on as always, because they are untouchable denizens of Mount Olympus, Michael Gambon has finally settled into his wizened peak as the powerful but ancient headmaster, and Ralph Fiennes returns with his excellent, bored Drawl of Evil, but two newcomers steal the show. Helena Bonham Carter’s performance as the insane prison escapee Bellatrix Lestrange is like an exploding nail gun, pure menacing power, and Imelda Staunton provides a perfectly pitched, sickeningly sweet performance reminiscent of a genius pantomime villain. You boo and you hiss when she comes on and you love to hate her, but the depths of her wickedness turn your stomach, especially in the showstopping detention scene.

It’s saying something when Emma McFreaking Thompson turns in the worst performance of your entire adult cast, I’ll just leave it at that. 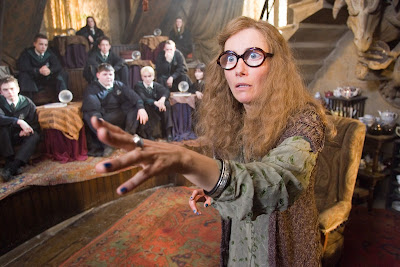 Please note that I don’t say these things lightly. I’m literally sitting next to a VHS copy of Dead Again as we speak.

However, for all the massive improvements Phoenix amasses upon its predecessors, it’s still weighed down by certain demining flaws. The purely anonymous score by Nicholas Hooper would be damaging enough, but when it shades into out-and-out lyrical rock songs, the film dives directly into the nearest dumpster. And the climactic battle sequence that closes the film alternates between electrifying thriller imagery (and some truly impressive visual effects, especially between Dumbledore and Voldemort) and wimpy light shows hardly more arresting than a game of laser tag. It too frequently slides into camp territory to sell its emotional climax, which it then immediately forgets about anyway. Also there’s a shot where it looks like Voldemort is doing jazz hands.

Let’s just say it’s a bit of a bumpy landing. But it’s the least turbulent Potter thus far, and I could see myself rewatching this one without wanting to stick a fork in an electric eel, so three cheers for Order of the Phoenix!