The Texts Are Coming From Inside The House 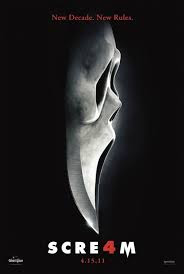 Here we are at the end of yet another of my franchise marathons. However, like so many of these slasher villains have proven, it’s never truly the end. Betweens remakes, reboots crossovers, and recalibrations, all our favorite killers remain indestructible. In fact, Scream itself is experiencing new life as a surprisingly watchable teen soap on MTV. Nevertheless, let’s take a moment to reflect on where some notable franchises have left us, in honor of the Scream tradition of contemplating the rules and formulas of horror films.

Friday the 13th left this world in a blaze of glory with the one-two punch of the insane, alternately blisteringly gory and leadenly dull Jason Goes to Hell and the zippy but senile Jason X. A Nightmare on Elm Street gave us Wes Craven’s New Nightmare, a thoughtful, chilling masterpiece that reflected on the decade of crap that came before it and recycled it back into something great. Halloween (reviews yet to come) tossed Michael Myers to the winds of the new millennium, letting him get torn apart by the twin evils of web television and Busta Rhymes. Texas Chainsaw introduced Leatherface to Illuminati nipples. And Saw forgot they were even making a film halfway through, leaving their main character quite literally on the cutting room floor.

So what are we to take from all of this? Well, mainly that late sequels suck, except where Wes Craven is involved. Now, 2011 Wes Craven was a much different, softer man than 1994 Wes Craven, and that’s the truth. Scream 4 is no New Nightmare and it doesn’t go around changing any games that I can see. But it’s a damn sight better than it has any right to be, especially coming on the heels of the appalling Scream 3. 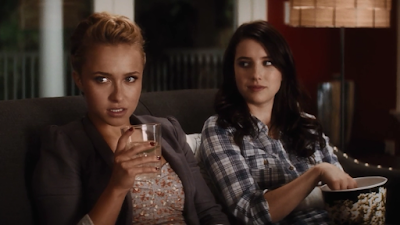 I mean, just by extent of not having that dumb-ass voice changer box, this film is like Casablanca in comparison to Scream 3.

Scream 4 begins by retracing its roots. Wait, let me back up. Scream 4 begins with a tongue-in-cheek, self-devouring, instantly divisive opening sequence that I am loathe to spoil if you haven’t seen it, though I err on the side of liking it. Then it retraces its roots, for the first time bringing consummate survivor Sidney Prescott (Neve Campbell) back to her hometown of Woodsboro, California. It’s been over a decade since the series of three murder sprees that defined her life, launching the wildly popular Stab series of horror films (the first three of which were based on her life, the rest of which get increasingly inane, all of which I hope somebody makes one day), and sending her to the top of the best-seller list as the author of a book about stepping out of the shadows, denouncing your role as a victim, and becoming a survivor.

Of course, the second she arrives in town a new murder spree begins as the villainous Ghostface (the evergreen Roger Jackson) turns his attentions to Sidney’s young niece (Emma Roberts) and her bland teen friends, of whom the only important one is the inimitable Kirby (Hayden Panettiere), a horror buff who oozes confidence and androgynous apathy. Sidney must once again team up with Sheriff Dewey (David Arquette) and his wife Gale Weathers (Courteney Cox) to solve these murders and just maybe save their crumbling marriage. 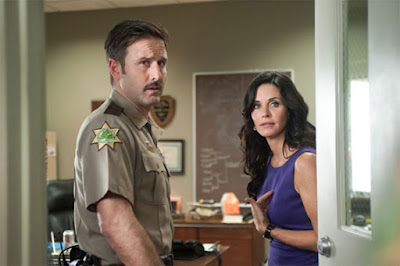 At least fictionally. Sometimes meta scripts can be painful.

Scream 4 is neither the apotheosis of what a modern take on Scream could be, nor is it the black mark on the franchise that some die-hard fans make it out to be. It politely engages with some modern technological advances (Facebook, Twitter, speakerphone, that sort of thing – trés Gossip Girl), mulls a bit over what it means to be a horror film in the Age of Remakes, and waves at new distribution technology and torture porn in the hallway before realizing it doesn’t actually recognize them and pretending it was swatting a fly or something. There are a few ideas that it bats around about as smoothly as a 46-year-old screenwriter and a 71-year-old director can be expected to (ie. about as well as asking them to navigate Tumblr). But otherwise it finds a fairly solid amount of actual material to work with.

It helps to think of it as Scream Lite, for the viewer on the go who wants to watch their brain cell expenditure. Sure it can be a little goofy (like their dogged assertion that naming a deputy “Anthony Perkins” is a subtle in-joke/veritable laugh riot), and maybe it’s a little flabby around the middle and during its extended finale, and yeah it is never ever scary, but it’s also a great deal of fun. Which is more than I can say for the embalmed gags and McDreamy preening of Scream 3. It’s an excuse to drop into the world of these characters one more time, and though it might be fleeting, it’s hard to find fault in that. 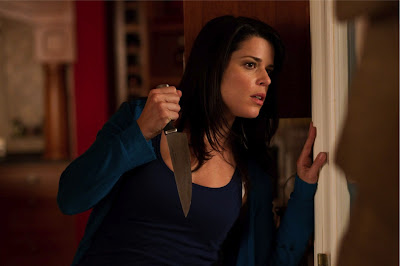 And now that the 90’s are over, we’ll never ever have to look at an all-denim ensemble again.

Admittedly, a lot of Scream 4 is coasting, though when it’s on autopilot it’s at least on the level of a Halloween: H20 rather than an I Know What You Did Last Summer, if that’s any comfort. And when the film is shaken awake, there are some moments that genuinely come alive. The film plays with the ubiquity of video cameras in the modern world, utilizing the technology to create multiple angle perspectives on some of the more effective tension sequences.

Now that I’m done making a total nerd of myself, it’s time to… do that a little bit more. Because the continuity editing in Gale’s scenes is just embarrassing, and I would be remiss if I didn’t bring that up at least once. 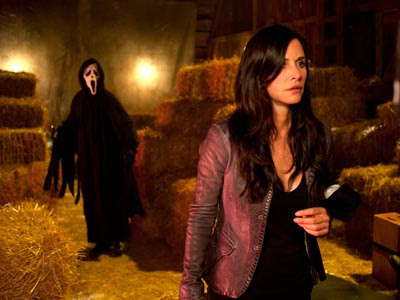 Anybody agree? No? Just me?

OK, I need to get my act together with some semblance of a conclusion here. Scream 4 has just really distracted me with its baffling uncategorizability. Scream 4 is an ultimately satisfying bumpy ride with veteran franchise actors squaring off against airbrushed MTV personalities, wooden quips rubbing shoulders with chewy subtext about victimization and American celebrity, and a kick-ass mod rock soundtrack by The Sounds not quite clashing with a romantic Western Marco Beltrami score that reminds us just how valuable he is to this series. In short, it’s a hot mess, but a happy one. Like a plate of nachos. Or a Sia music video.

After all I’ve been through, I can’t say I’m disappointed by that.