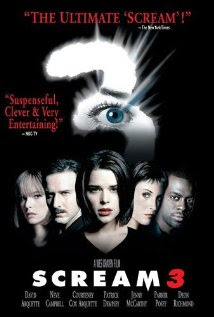 Wes Craven is not a horror director. That is to say – like so many before him – he is a director who began his career with a pair or earth-shaking horror flicks and was immediately put in a box, not really allowed to do anything outside the genre. You’ll never catch me complaining about this, because the man has turned out some of the best genre pictures in three consecutive generations. But the fact remains that Craven had other stories to tell.

It was in pursuit of one of those stories – 1999’s Music of the Heart, starring Meryl Streep,  - that Craven was strong-armed into helming the third entry in the Scream franchise. He agreed to come back in exchange for a green light on his heartwarming violin picture. Needless to say, his music-loving heart wasn’t in it. And neither was Kevin Williamson.

The screamsmith was far too busy with the seminal, life-changing teen soap Dawson’s Creek to write more than a treatment, and screenplay duties were left to one Ehren Kruger, who must have gotten the gig on the strength of his last name alone, because his CV is a gaping hole that eventually leads to such pivotal masterworks as The Ring Two and three Transformers sequels.

As you may have already guessed, the Scream 3, she is not so good.

I mean, maybe it might have been if Meryl Streep was in it.

Scream 3 instantly starts us off on the wrong foot with its cameo opening deaths: recurring character Cotton Weary (Live Schreiber) and his girlfriend Christine (Kelly Rutherford). Cotton I can understand. We’re capping off a trilogy after all. But Kelly Rutherford? She’s so inadequately famous for this role that Scream 3 is listed second on her IMDb “Known For” page. That’s just embarrassing.

Anyway, these two get murdered using a plot device so New Millennium, it’s all I can take not to vomit all over my keyboard: Apparently Ghostface (the ever reliable Roger Jackson) now has a voice processor machine, via which he can perfectly imitate the voice of any character in the movie. This is technology that doesn’t even exist now, 15 years later, and it s deeply, unequivocally irritating. It would be a better plot point just to say that he’s great at doing impressions and leave it at that. It would still be hideously ludicrous, but at least it doesn’t make me want to smash my Blu-Ray disc against a concrete wall.

Alright, it’s out of my system. Scream 3 depicts the production of Stab 3: Return to Woodsboro, a sequel to the two highly successful horror films based on the life and times of Sidney Prescott (Never Campbell), who had two sets of her friends get murdered in high school and college. Fun stuff. Real life Sidney is now a recluse, living in a remote house in the mountains and working for a women’s crisis counseling hotline. When the cast of Stab 3 begins to die in the order that they are killed in the script, Sidney once again teams up with Woodsboro deputy-turned Hollywood consultant Dewey Riley (David Arquette),  and the acid-tongued reporter Gale Weathers (Courteney Cox), as well at the newcomer, the movie-loving, suspiciously macabre Detective Kincaid (McDreamy).

Honestly, this is a great plot on paper. The killer is bringing the movie to life, but constant rewrites (one of the film’s more successful self-reflexive jokes) have left three versions of the script floating around, and nobody knows which copy the killer got a hold of. But just like Scream 2 before it, this great concept slips through its fingers before it even gets a chance to establish a pattern, degrading into a mush of stabbings, cell phone calls, and sinister faxes. We never even see the script we’re supposed to be worried is coming to life.

The difference between Scream 2 and this one is that it still had a solid character arc to fall back on. That film was about Sidney processing her old trauma under the shadow of a new one. This one is about Sidney sitting in a variety of comfy chairs, out of which she occasionally rises for some vigorous avoid-the-knife calisthenics.

There are some stabs (ha) at character expositions, in which Sidney’s mother Maureen (Lynn McKee) is revealed to have a secret past. But these are rendered entirely useless by the script’s dogged insistence on vilifying Maureen as being a slut because she was raped, which relies on such twisted, ugly gender politics that making Megan Fox’s ass a more nuanced character than her actual role in Transofrmers 2 actually seems like a progressive step.

Really, the script is just a drag, replacing the series’ characteristic movie references with a rotting heap of F words in a feckless attempt at being “edgy.” 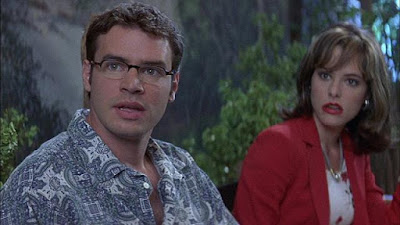 Scream 3 is about as edgy as a Dungeons and Dragons die.

I do have love in my heart for all the Scream movies. Even this – the left-handed stepchild of the franchise. But sometimes you have to work hard in a loving relationship, and focus on the good, which is what I shall do here. There are a good handful of genuinely funny moments, though they are more broadly comic than the franchise is accustomed to. So at least the sense of humor is intact, though there is only one sequence (a chase scene through a stage recreation of Sidney’s old home) that even approaches the live wire tension of its predecessors. At least two moments achieve that delicate balance mingling horror and comedy, and the cast ain’t half bad.

Actually, that is to say, they’re exactly half bad. The cadre of pretty young thangs shoveled into the film’s bloated midsection (including Jenny McCarthy, Emily Mortimer, Matt Keeslar, and Deon Richmond) is uniformly anemic, though Parker Posey breaks free from the mire once she’s called upon to do some stellar one-on-one time with Courteney Cox. David Arquette, on the other hand, is the exact opposite, straining to connect the dots of his undernourished love-hate relationship with then-new wife Cox., but excelling once again at subtle, self-deprecating comedy. Cox herself is good as ever, though forced to act from behind a set of bangs that seem to have been burned off with acid. Neve Campbell and Patrick Dempsey fail to make much of an impression, spending all their time as they do gnashing their teeth at one another, but Scott Foley finds his time to shine as harried young director Roman Bridger.

Really, it’s not an inspiring set of pros. Especially not when the cons include those bangs. So I leave you with this: Scream 3 is the worst Scream movie. It’s still an alright Scream movie, but it’s the worst. What can I say? I’m in Wes Craven’s court till the day I die, but you can’t win ‘em all.

And sometimes you pick the wrong day to insult your hairstylist's favorite band.