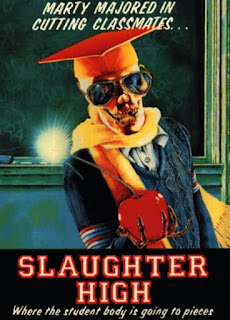 The reignition of the Scream franchise with the MTV drama series (which ain’t half bad, if you can turn off that part of your brain that can reliably calculate human ages – if any of those tousled hunks are actually in high school, I will buy myself a hat so I can eat it) has got me thinking. The slasher genre is a malnourished, formulaic bunch, but these satirical pastiches presume that they’re all the same.

They’re not. Now, I’m not saying that slasherdom is an overflowing fountain of abundant innovation. Far from it. But if a sufficiently insane teen is inspired by the series to check one out and picks a title at random from my Census Bloodbath list, more often than not, they’ll end up with a grimy urban thriller like Eyes of a Stranger or a meandering, personality-free attempt at drama like The Outing rather than a traditional slice ‘n dice pic like Friday the 13th.

Even films with every generic element in place (killer in a mask, crop of partying horndogs, anniversary of a past trauama) can defy expectation – if only for the fact that either the rules hadn’t been invented yet, or else they were so stale and musty by the time the film was made that the producers attempted to lacquer them up with harebrained ideas that appeal to the increasingly easily bored bloodthirsty teens. As a result, almost no slasher is what we can call “typical.” Which is where Slaughter High comes in.

Despite containing every single one of these tropes and change, Slaughter High is a film so singularly misguided, so exquisitely strange, that I defy anybody to attempt to categorize it. As it happens, the film came out in 1986, after non-paranormal slashers had gone out of vogue and producers of such resorted to bigger, splashier deaths to balance out the revenue. This is the roiling, primordial pit that Slaughter High oozed out of, and that is why – in spite of its astoundingly low grade production values in almost every capacity – it remains an indelible classic of the form. 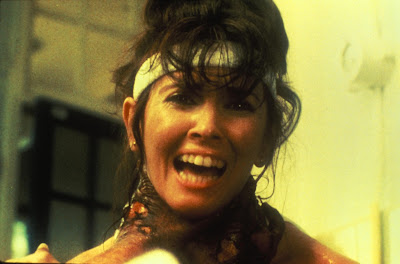 Slaughter High begins on April Fool’s Day, a holiday with robust murder potential and on which two of my favorite slashers are set. The track team of Doddsville County High School is right in the middle of a prank to end all pranks: namely, luring nerdy punching bag Marty (Simon Scuddamore) into the girls’ locker room, getting him naked, and filming the scandalous results. This prank gets interrupted by the Coach (Marc Smith of Deep Red and The Omen III), precipitating a new, even crueler prank on Marty in the chemistry lab that accidentally results in a chemical explosion, leaving him covered in acid scars and severe burns. This prank is execrable. These people are horrible. You will hate them and want very badly to see them die painfully. Luckily, you picked the right subgenre.

Ten years later, the gang arrives for their class reunion only to find an empty, abandoned school as they realize that they’re the only invitees. This leads to a wild night of drunken carousing, getting locked inside, and being efficiently murdered by a scientifically-minded killer in an April Fool’s jester mask. No prizes for guessing who’s beneath it.

Carol (Caroline Munro of Maniac) is the beautiful vixen who seduces Marty into evacuating his clothes and is now an unsuccessful actress trying like hell get a single offer that isn’t in porn; Skip (Carmine Iannacone), the team captain/class clown whose nipples heroically strain to be visible no matter what type of shirt he’s wearing; Stella (Donna Yaeger), a spineless blonde bimbo with a voice like a rusty hinge; Joey (Gary Martin, who played a guitarist in Shock Treatment, to nobody’s interest but my own), a dumb gearhead who ends up marrying Stella; Frank (Billy Hartman), a greaser guido with chest hair you could make Velcro out of; Ted (Michael Safran, famous for his role as “Mustard Goon Two” in 2002’s The Ketchup King), who I’m pretty sure doesn’t actually appear in the film until his grisly demise; Carl (John Segal), a blonde law student who mostly just smiles quietly in the background; Suzie (Sally Cross), who is gone half the time meeting her fiancé’s parents only to instantly perish upon arrival; Nancy (Kelly Baker of Don’t Open Till Christmas), who is British; and Shirley (Josephine Scandi), who materializes once the filmmakers decide that we haven’t seen quite enough boobs yet. 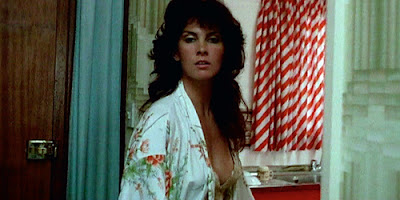 The most distinctive feature* of Slaughter High is its sheer unpredictability. And I don’t mean the plot – that old chestnut could be figured out from the opening credits. I mean that Slaughter High is such an abominable example of cinema that literally no line of dialogue, aspect of performance, or character reaction is remotely comprehensible to anybody who’s even mildly film literate. It took three whole directors to cobble this mess into a reasonable whole and is captivatingly inane.

*Aside from its score – an eight note progression that is repeated incessantly on every instrument available to session musicians in the 80’s – which mainly means saxophones, electric guitars, and synth boards because the 80’s were the Modern Renaissance. This was composed – if you could call it that –by Harry Manfredini, who had exactly one great idea in 1980 with Friday the 13th that he spent the rest of his career flailing to recreate. 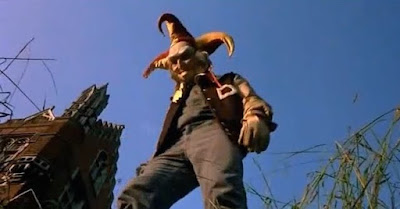 Presumably it took two entire co-directors to keep the pile of cocaine from blowing away.

Slaughter High is a frustratingly difficult film to pin down. It’s like trying to pick up an ice cube with chopsticks: Just when you’re laughing derisively at the film’s manner of proving that the women have aged by draping them in prodigious fur coats that threaten to swallow them whole, or their dogged insistence that April Fool’s Day ends at noon, or the pitiful jingling of Marty’s jester cap as he tries to stalk menacingly behind defenseless victims, you find yourself laughing at something even more inexplicable: an actual joke. That is not to say that any of Slaughter High’s badness is intentional (in all honesty, it’s probably the goodness that’s unintentional), but there are some genuinely funny gags that crop up in unexpected places, like pens that have fallen off your desk.

And the kills! Oh, I could wax poetic about the kills. Never in cinema history has there been such a striking collection of frantically off-the-wall murders. Between a chemically-spiked beer that makes a guy’s intestines explode out of him, an acid-filled bathtub that reduces a trauma victim to cinders, and the metal bed that electrocutes a woman mid-coitus, blasting the guy off of her, but taking great care to make sure we can still see her waggling breasts, there is no shortage of mystifying carnage around every corner. It’s over the top, boldly idiotic, and surprisingly gory when it gets the chance. A couple of these scenes shade a smidge too far into torture porn for my tastes, but the rest are like an endless big top carnival of biological mayhem.

Between the cheesy laughs, the actual laughs, the spectacular kills, and an ending that devolves into a maudlin fever dream that would make Salvador Dalí do a double take, Slaughter High is a fascinating antique. 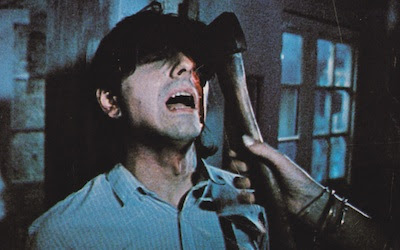 Also there’s a penis! And a man ass! The film is practically progressive at this point.

I think I’ve done a great job at describing the manifold wonders of Slaughter High while leaving room for your own personal discoveries along the way. But I must leave you with a warning: Campy or not, Slaughter High is a piece of crap. It is what a piece of crap would crap after eating too much crap.

It’s impossible to see through the sludgy murk of the exterior scenes, there’s as much tension as an episode of Mickey Mouse Clubhouse, and the Final Girl sequence unravels the conflict with a weak, overlong wet fart. No actor is turning in decent work, but Marc Smith seems to be actively falling asleep, several of the women screech their dialogue as if they’re hanging in a cage suspended from a tower, Caroline Munro seems to have her lines erupt from her entirely by serendipitous accident, and Simon Scuddamore screams like an elderly spinster cooing over a tray of tea cakes.

It’s in the firestorm of awful that Slaughter High is able to find its true, ineffable self, but that doesn’t make the awful stuff any easier to sit through. I will leave you with two fleeting, concluding impressions – one good, one bad – after which you can balance out your options and decide if this movie is for you. Here goes:

1: The single best element of the production is its set design, which reliably renders a school building as something gothic and spooky.

2: In an attempt to make him look younger in the high school scenes, an industrious makeup person vigorously rubbed an actor’s cheeks with bright crimson rouge.

Until next time, I'm your faithful servant in slasherdom. Happy belated April Fool's!

Killer: Marty Ranson (Simon Scuddamore)
Final Girl: Carol (Caroline Munro)
Best Kill: Ted's intestines explode out of him after he shotguns a chemically-altered beer, for so many reasons. First, because people have been drinking beer all night and somehow this is the only dangerous one. Second, because it is so unexpected and so boldly gory and just so damn strange.
Sign of the Times: When the pranksters film a naked Marty in the locker room, they scream "Where's the beef!"
Scariest Moment: Lights explode above Carol as she runs down the hallway.
Weirdest Moment: The ending, which transforms the school into a fog machine hell dimension.
Champion Dialogue: "Dirty talk? Um... Fuck. Tits. Screw."
Body Count: 13
TL;DR: Slaughter High is a mystifying, terrible, magnetic presence that makes this project the exciting adventure that it is.
Rating: 6/10
Word Count: 1805
Also sprach Brennan at 8:37 AM