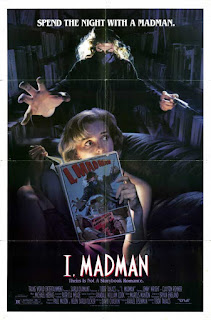 I, Madman is a cerebral, stylish offshoot of the Nightmare onElm Street paranormal vein of slasherdom that refrains from merely being a callous rip-off. It’s gorgeous, reasonably well acted, exciting, and the inspiration for the title of my 2014 horror-comedy short film, iMadman. 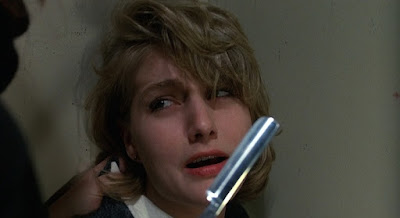 The slasher is dead. Long live the slasher.

I, Madman tells the story of a story. Virginia (Jenny Wright) is a young actress living in Hollywood who loves to read. She finds herself freaked out but compelled by a pulp horror novel by a man named Malcolm Brand and searches the used bookstore where she works for a copy of his other book, I, Madman. When one arrives at her doorstep, she assumes it was sent by her coworker, the sarcastic, horny Mona (Stephanie Hodge) – the human equivalent of the worm at the bottom of a tequila bottle – who has a museum-worthy perm and eyeshadow that looks like someone hit her in the face with a brick and the bruises are just now fading.

Virginia cracks open the book and the book cracks back. When the titular Madman (Randall William Cook) – a lovelorn but ugly psycho who cuts off all his facial features in order to impress a pretty actress – begins to stalk and kill Virginia’s acquaintances in real life, collecting bits of their faces to win her love, she tries to convince her homicide detective boyfriend Richard (Clayton Rohner of April Fool’s Day) that she knows what’s actually going on. Although he slightly begins to believe her when she accurately predicts the next few murders, an erroneous assumption and her frequent tearful exclamations that the book is nonfiction start to discredit her in the eyes of his boss. 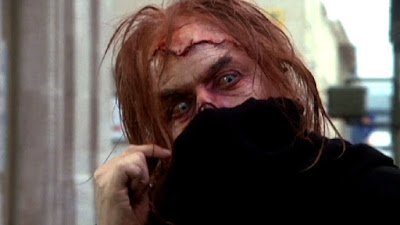 Horror fans get no respect.

When I, Madman is good, it’s absolutely incredible, especially considering its pedigree (1989 was no time to be thoughtful or original, or in fact, a film). Perhaps the cause of this is that, while it still remains in structure and essence a slasher, it is neither a body count film nor an attempt at a Gran Guignol gorefest, at least where the kills are concerned. Removing the raison-detre of the derelict slasher genre allowed the film to focus all its energies on the killer-Final Girl relationship, creating a truly macabre, classical story at its core.

The film is about fiction intruding on the reality of a woman with an overactive imagination. She fears it, but she can’t help herself from going back to it, mirroring many people’s relationships with the horror genre itself.

In achieving its more cerebral ends, I, Madman goes to great lengths of style and panache. Just showing some chick reading over and over again would be about as boring as an ex-C-SPAN moderator reunion tour, so the film punches it up, showing Virginia entering the fantasy world of the books as one of the characters with seamless editing and costume/set changes. In fact, the film begins on one such scene depicting [SPOILERS] a mad scientist’s hybrid jackal boy creation, a supremely startling Claymation creature and a jarring introduction into what was seemingly a straightforward slasher film.

As the film goes on and these fictional, stylized settings begin to clash with the gritty Hollywood reality, the film outdoes itself in an explosion of neo-noir spectacle, all deep focus sets with billowing curtains, smoky exteriors cut with hard shafts of light, and interiors lit from the outside with sticky pink neon or cherry red police lights through slats in the blinds. Shadows and silhouettes dominate the madman’s world, which is like an issue of Dick Tracy Meets the Phantom of the Opera. 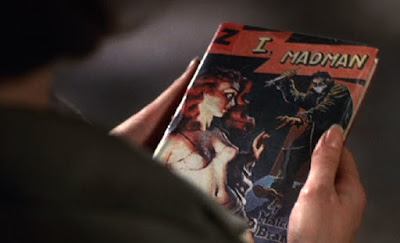 And when the film finally gets down to the gore, it is rather terrific. The kills themselves are mostly implied, offscreen, or in silhouette, but every ghastly act is reflected in the piecemeal collection of the Madman’s face, which evolves from a pitted mass of flesh to a Frankensteinian puzzle of sewn-together grue, expertly applied to himself by FX supervisor Randall William Cook, who would go on to make hi craft count in the Lord of the Rings trilogy, of all things.

The man’s a double threat, because his Madman is a legitimately menacing monstrosity, harking back to the Lon Cheney silent era of looming, melodramatic villains. He’s not a trained actor and, as such, doesn’t one hundred percent physically inhabit the role  he runs a little bit like an ostrich in swim flippers – but for the most part he does a remarkable job in a mostly remarkable cast.

Jenny Wright is a solid anchor, luminously beautiful yet sharp and self-motivated with a heavy amount of open vulnerability. And Clayton Rohner is decent, though he’s mostly eye candy – one more remarkable thing about I, Madman is that – while there’s actually no nudity at all, it exploits Rohner far more than any of its actresses. I thank it on the grounds of feminism and personal taste. The true standout of the cast is – surprisingly – Stephanie Hodge, a comedian whose Mona provides a terrific biting edge of comic relief and whose chemistry with Wright provides one of the most genuine friendships I’ve ever seen in a slasher film. 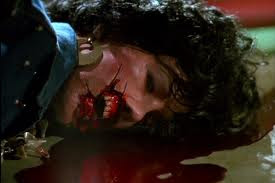 Three cheers for Mona. Sorry about the outfit jokes.

I, Madman plugs along for quite a while being pretty extraordinary until –seemingly for no reason – it sputters and stalls. It doesn’t get bad. I, Madman is not at any point a bad movie. It just devolves into a woefully generic sort of police procedural topped with a fantastical nonsense finale with a great sense of set dressing but no clue how to edit a confrontation in close quarters. A half hour of dull material followed by an ambitious but sloppy ending isn’t enough to derail the stylish, intelligent slasher that is I, Madman, but it’s certainly enough to knock it down from top marks.

I would highly recommend the film for anyone looking to dip a toe in the weirder end of 80’s horror without blowing their faces off with body axes and lamprey monsters, because with its innate sense of style and class in its storytelling, I, Madman is a pretty decently crafted film qua films, not just among its leprous peers languishing at the end of the decade. Oh, and if you’re worried that it might be scary, it’s not. Slasher films are never scary.

Killer: Malcolm Brand (Randall William Cook)
Final Girl: Virginia (Jenny Wright)
Best Kill: A shattered window pane falls and guillotines the jackal boy in half.
Sign of the Times: I would take this opportunity to make fun of Mona’s makeup again, but honestly it’s more jarring to see people smoking indoors.
Scariest Moment: The Madman reveals his mutilated nose and mouth to Virginia in her kitchen.
Weirdest Moment: Any moment with the Claymation jackal boy.
Champion Dialogue: “If it will make you feel any better, first thing after breakfast I’ll cut myself shaving.”
Body Count: 7; 1 in a book, 6 in real life, if you count the Jackal Boy and the Madman as actually being real, which I do.
TL;DR: I, Madman is a stylish, cerebral slasher with a saggy finale.
Rating: 7/10
Word Count: 1364
Also sprach Brennan at 2:51 PM