Welcome back to Fright Flashback, where every week until the end of summer we will visit an older horror film that is in some way a spiritual precursor to an upcoming new release. This week we are anticipating Paper Towns, this summer's hipsterbait John Green adaptation  In celebration, we'll be revisiting I Know What You Did Last Summer, the 1997 Kevin Williamson slasher based on the 1973 suspense novel by Lois Duncan. 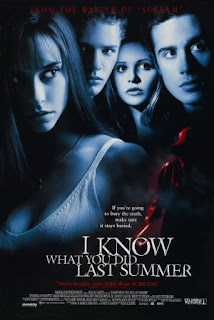 
You and I have spent so much time poring over slasher dreck from the 80’s, it’s easy to forget that there’s actually been a great deal of cinema history between 1989 and now. I know, right? So between the recent reignition of my Scream marathon and this Fright Flashback entry, I’d like to give you a quick crash course on what it meant to be a horror flick in the late 90’s.

Once 1989 hit and the slasher market crashed for god, horror was in a tough place. Direct-to-video dreck like the Leprechaun sequels were still sticking to the bottom of the genre’s shoe, but true classics like Candyman were few and far between. Then Scream went and changed everything in 1996. All of a sudden, horror was marketable again. All you needed was a cadre of teen stars in tight tops, a handful of self-knowing jokes, and – if he was available, and he was – Kevin Williamson. The floodgates opened, sending films like Scream 2, Halloween H20, Urban Legend, and The Faculty spinning out into the market.

At the forefront of this trend was a little film called I Know What You Did Last Summer, based on a slasher script that was penned by Williamson before Scream but snapped up like a prize piece of sushi following that film’s success.

IKWYDLS tells the tale of a group of graduating seniors in Southport, North Carolina. Barry Cox (Ryan Phillippe) is a privileged dick, as either of those names might have proven to you; Helen Shivers (Sarah Michelle Gellar) is his beauty queen girlfriend with dreams of stardom; Julie James (Jennifer Love Hewitt) is her best friend, a down-to-earth (Final Girl), straight-laced Final Girl), straight-A student (Final Girl); and Ray Bronson (Freddie Prinze, Jr.), is her boyfriend, who is less privileged than the rest of them, which means that his perfectly bleached tank tops are an inch looser than Barry’s.

Life is hard below the MTV poverty line.

The friends spent the night partying at the beach after the annual Fourth of July celebration and during the drunken ride home they accidentally hit someone. After some frantic arguing – Julie wants to call 911 because Final Girl – they decide to dump the body into the ocean and take this secret to their graves. It turns out that that won’t be too difficult, because the very next summer a psycho in a rain slicker brandishing a hook begins threatening them with notes that read “I Know What You Did Last Summer” and bumping them off one by one. During the year, Julie and her friends have become estranged, but now they must work together to solve the mystery and discover the identity of the murderer… before it’s too late. 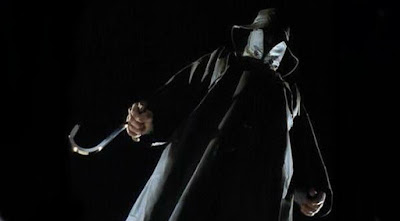 If we’re speaking to the film’s raison detre: namely, delivering prepackaged babes straining at the seams of their crop tops before safely kicking the bucket so that blood drips pretty from their pouty Dawson’s Creek 3-episode-arc lips, IKWYDLS is a sterling success. As a bona fide slasher whodunit flick, however, it does have its flaws. Against all odds.

Having been written before Scream, the film largely lacks the arch-ironic spin that characterized most of the slashers of this period. That isn’t necessarily a liability, but it does leave it ill-equipped to process the layers of urban legend that penetrate the central story or engage with it at any level other than face value. Not to be outdone, that exact goal would be fulfilled by the Jared Leto slasher Urban Legend the very next year, but IKWDLS wastes too much potential on an underexplored premise that leaves it stuck with a killer who looks alarmingly like the Gorton’s fisherman. 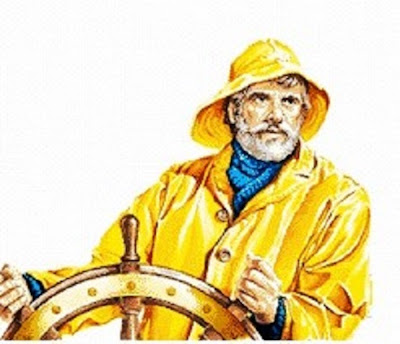 I know what you breaded last summer.

On top of its generally thinner screenplay, the core mystery is insipid gruel, hopelessly extending the run time with its watery trivialities. When the film takes a break from terrorizing its teens to let Julie put on her Nancy Drew knickers and galumph around sleuthing in backwater townships, the pacing grinds to a screeching halt. Although these scenes introduce us to Anne Heche, who delivers the most nuanced, dependable performance of the lot, the plot they serve is an uninterested, nonsensical slog. And I do realize it’s difficult to provide decent motivations for the sorts of body counts we’re used to looking at in slasher flicks, but SPOILERS [isn’t it more satisfying to get revenge for your murder if you’re actually been… you know, murdered? It seems a bit beside the point if you’ve actually been alive the whole time. Water under the bridge and all that.]

And of course, existing as it does smack dab in the middle of the Teen Soap slasher trend, the actual horror in this horror film is remarkably tame. The stalk sequences aren’t particularly well thought-out (run perpendicular to the car chasing you, Ryan Phillippe! Did that shower you just took fog your brain up as well?), the killer obviously attended the Jason TakesManhattan School of Teleportation, and there’s nothing particularly gory worth mentioning beyond the first kill. There are a handful of surprisingly nifty jump scares, but mostly the film is content to be blandly functional. 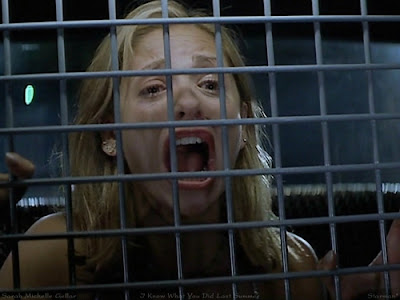 It’s so hard to stay friends after high school.

But it ain’t all bad. Though admittedly not all of this may be on purpose, IKWYDLS can still be a pretty fun teen romp when it wants to be. 90’s garbage punk blares on the soundtrack, Jennifer Love Hewitt’s breasts enormous breasts threaten to swallow every gaudy necklace she wears, Ryan Phillippe’s shirts get bigger with every passing scene like he’s the Incredible Shrinking Man, and Kevin Williamson’s arch dialogue reminds you of just how smart you and your friends thought you were in high school.

And, hey. It’s trying. There’s only one truly memorable shot (the killer viewed upside down from a victim’s perspective) amid the generically slick cinematography, but somebody obviously fought to include it. And the idea of Freddie Prinze, Jr. in abject poverty might be laughable but the idea of class disparity isn’t just a throwaway line. It’s about as sincere as an Oscar acceptance speech begging for world peace, but at least it’s trying to open a dialogue. In a slasher movie! You gotta have a little respect for the sheer mad audacity.

Of the core teen cast, only Sarah Michelle Gellar turns in a performance worth truly commending (Love Hewitt seems to be attempting to blink her lines in Morse code and I’m fairly certainly Prinze, Jr. forgot to take out his retainer before shooting), forming some genuine chemistry with her castmates, but they all make for a believable bunch when it comes down to brass tacks. At least they all seem to appropriate age within a reliable margin of error, which is more than I can say for even the best of the 80’s slashers.

At the end of the day, I won’t be popping this flick into my DVD player every time summer rolls around. It’s not eminently rewatchable, like even the worst of its Scream brethren. But every now and again, it’s a decent frothy 90’s delicacy, as long as you can survive the fiddly mystery bits. Watch it at a party so you won’t feel embarrassed taking over it.