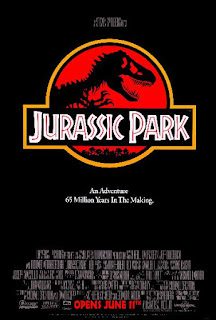 This review is an epic adventure two years in the making. You see, back when I was first starting my blog in 2013, it was right around the time that Jurassic Park was re-released in theaters in 3D. During that time, I was still using my training wheels. I was still transitioning from my cruddy, Tumblr-based format, and it would be a couple months before I made the kamikaze commitment to pen a review of every movie I watched.

Unfortunately, a lot fell through the cracks, though it did lead to some very strange and insightful articles that are far from disappointing. Anyway, this all comes back to me sitting in that dark theater, re-experiencing Jurassic Park for the first time since childhood on the big screen. All big, puffed-up talk about Spielberg and popcorn blockbusters and the rise of the film school generation aside, that is the kind of experience that you can’t fail to be profoundly affected by. You wanna know why? I’m just gonna say it, professionalism be damned: Jurassic Park is freaking awesome. And I’m sorry I didn’t find the time to review this back then.

Yes, it has a brain in its head, yes, it’s marvelously composed and shot, and yes, the computer imagery is revolutionary, but before we get down to brass tacks, let’s take a moment to step back and look at the big picture that those tacks are pinning up. 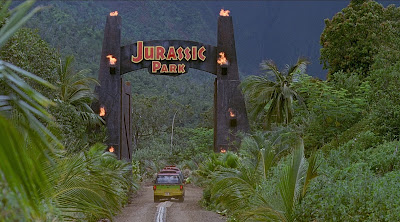 Of course, Jurassic Park has the audacity to open straight onto its very worst scene: A tragically silly raptor attack littered with an uncomfortable profusion of extreme close-ups of mouths. But the effect of that front-loading means that it’s only uphill from there, and between this scene and the film’s grand finale, that slope is like Mount Frickin’ Everest.

When the movie settles down into its plot proper, we learn several things. John Hammond (Richard Attenborough) is a man with a dream. And a bank account that would make Donald Trump weep tears of liquid gold. His life’s ambition is to create an unforgettable theme park populated with live, cloned dinosaurs on the South American island Isla Nubar. When his investors demand a thorough inspection of the site before opening it to the public, they call in prominent mathematician Ian Malcolm (Jeff Goldblum).

For his defense, Hammond brings in famed archaeologist Alan Grant (Sam Neill) and his wife/girlfriend/general long-term commitment person, the paleobotanist Ellie Sattler (Laura Dern). To his dismay, his guests don’t want to play on his elaborately-designed rides, rather preferring to marvel at the science behind the cloning and discuss just how dubious an idea it is to toss kids onto an island with a herd of hungry velociraptors.

Right on cue, Hammond’s grandchildren – Tim (Joseph Mazzello) and Lex Murphy (Ariana Richards) arrive. Together with the inspection team, they set out on a jeep tour of the park that goes horribly wrong when a bit of subterfuge by disgruntled employee Dennis Nedrey (wayne Knight – Hello, Newman) causes the gates to malfunction, setting the ravenous dinos on the rampage. Dr. Grant finds himself stranded with the kids and, in the process of escorting the little buggers across the island, begins to shake his firm resolve against ever having one, because Steven Spielberg. 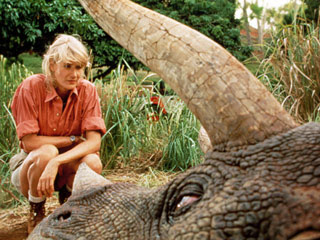 At its core, Jurassic Park is an astounding act of creation. Combining top dollar animatronic effects supervised by SFX superstar Stan Winston with an extremely clever, tastefully discreet use of nascent CGI technology, Jurassic Park brings prehistoric mayhem to impossible life. Computer graphics were about as sophisticated as a Nintendo game back in 1993, but by using them to augment brilliant practical effects and disguising the biggest deficiencies beneath the cover of night, the film holds up mind-bogglingly well. The dinosaurs here have weight and autonomy bestowed upon them thanks to the tender, loving care of the filmmakers, making Jurassic World’s collection of pixels look like a kids’ cartoon.

Jurassic Park is ultimately a celebration of what technology can achieve* when it’s applied with some good, old-fashioned elbow grease. And that’s the thing about the film that makes it such an enduring classic: Yes, it’s an enormous popcorn spectacle, but the showstopping effects are generously ladled over what is already a terrifically solid film qua films.

*Ironically, the story is staunchly anti-science, but that’s more Michael Crichton’s fault than anything. 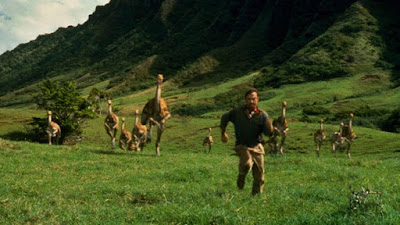 I would say that the movie would be just as good without the dinosaurs, but even I know that would be going at least a smidge too far.

Beneath the wondrous layer of dino mayhem, Jurassic Park is an appallingly clever film. The subtext (which is largely about chaos theory and how any manmade attempts to alter the course of nature are bound to go horribly wrong) manifests itself in a variety of subtle, layered ways, many of which are achieved with the help of ace cinematographer Dean Cundey (who also did Halloween and everything else that matters). In moments like a computerized DNA pattern being projected onto the rough, scaly skin of a hunting velociraptor, or the billowing “when Dinosaurs Ruled the Earth” banner that flutters from above a roaring T-Rex, Jurassic Park is both rapturously beautiful and visually inventive.

And this rampant creativity doesn’t just stop at frame composition. The film’s action sequences are among the best ever committed to celluloid, ranging from the unbearably tense (the raptors in the kitchen), the heroically cool (the jeep crashing down the cliff face), and the intoxicatingly intense (the kids fighting to keep the jeep’s glass ceiling between them and the T-Rex’s slavering jaws). All this cinematic carnage is peppered with instantly iconic shots that any movie producer would sell their left lung just to have one of, pushed over the edge with bombastic glee by John Williams’ brassy, epic score. 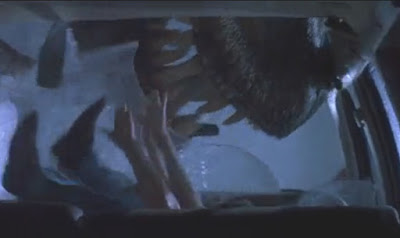 After all this time, we’re still trying to break through the glass ceiling.

Now here’s the part where the imperfections hiding in the shadows come out to pounce now that our guard is down. This was a film made in the early 90’s after all, and the only unquestionably perfect thing to come out of that entire period is me. As such, Jurassic Park hails from the early days of home computers, in which thriller directors found endless captivation in lavishly depicting people clicking through blocky filed systems. 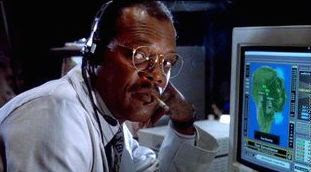 That’s right, Samuel L. Jackson is cast as the resident computer nerd. Pulp Fiction was a year away, so nobody could quite figure out what to do with him. This is mystifying, but it’s also a good segue into the acting, another unfortunate victim of the stranglehold of the 90’s. Along with a slate of malnourished characters that are more broad strokes than nuance, there are wild peaks and valleys in the film's overall performance quality. Attenborough, Dern, and – shockingly – Knight make it through without a scratch, but Sam Neill is a little too puffed-up, the kids are a little too shrill and wheedling, and I hate to admit it, but I’ve never uh… been um- a huge fan of –uh… Jeff Goldblum.

I appreciate that his acting style emulates the natural processes and rhythms by which actual real people formulate their speech. I really do. But if I had a nickel for every godforsaken syllable he uses to infinitely prolong his (admittedly well-crafted) dialogue, I’d make more than his entire salary. Plus residuals.

But aside from these slight speed bumps, Jurassic Park is and will always remain an indefatigable classic of popcorn cinema. It’s a superbly crafted work of art with a beating human heart hidden beneath its shining, high-tech exterior. And, after my next entry in this marathon, we’ll find out once and for all if quality blockbusters do move in herds.