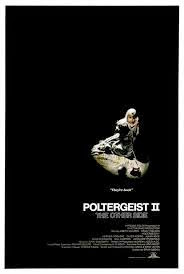 It was only a matter of time before they made a Poltergeist sequel. After all, the original film came out in 1982, just one year after the 80's sequel inferno ignited with the success of Friday the 13th Part 2.

It's a mystery why they waited so long, but presumably the filmmakers wanted to be respectful of the legacy of Dominique Dunne. The actress, who played the Freelings' teen daughter, was tragically murdered shortly after the film's release, forming the first in a series of unfortunate deaths that became known as the "Poltergeist Curse."

Poltergeist II: The Other Side is the dictionary definition of diminishing returns. The box office was lower, the returning cast was altogether weaker, and the special effects extravaganza that defined the original film had subsided into the background. The plot could have given away this fact all on its own, with its ultimate revelation that the Freelings' house in the Cuesta Verde suburb complex was built on a burial ground which was... built on a different burial ground. This time, the tomb of an unlucky cult.

One of my favorite things is when horror franchises get desperate enough to resort to crazy plot devices to keep their overarching narrative going. This is like Christmas for me.

So anyway, the Freelings - father Steve (Craig T. Nelson), mother Diane (JoBeth Williams), son Robbie (Oliver Robins), and daughter Carol Anne (Heather O'Rourke) - are back, and this time they're living with their grandmother (Geraldine Fitzgerald). When the demonic cult leader/ghost/whatever the needs of the scene require Reverend Henry Kane (Julian Beck) begins haunting their new abode, inflicting the power of the spirit world upon the family yet again, they realize that their nightmare isn't over. 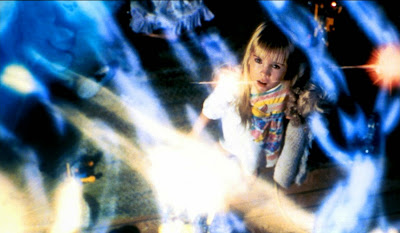 Nor are the effects that look like a Scooby Doo computer game come to life.

Of course Tangina (Zelda Rubinstein) is back, but the utterly weird effect she instilled upon the first film is dashed through overfamiliarity, a too early appearance, and its dilution through the utterly inadequate Taylor (Will Sampson). Taylor is at once a grotesque caricature of Native American shamans and a purveyor of dangerously concentrated Sequel Explanation nonsense. When he's not sitting in his teepee or trying to steal Steve's car, he is portentously babbling about the evil forces that are hard at work at not scaring us at all.

Because, let's face it, Poltergeist II: The Other Side is about as scary as a bowl of milk. The special effects are mostly nonexistent, only perking up beyond "a third grader drew lightning on the screen" on two occasions. Now, one of these moments is pure H. R. Giger nightmare fuel, but for the most part the film can't focus on anything long enough to wring true terror from it.

To be fair, this was a film beset with difficulties. Following Julian Beck's untimely death from stomach cancer during the middle of filming (The Curse! Burn the witch!), the filmmakers were forced to retool the ending sequence, throwing off the balance of the story immensely. While Kane's visage and Beck's performance are suitably extravagant, he never comes across as a truly potent evil figure, and his being shuffled out of the film halfway through renders the entire third act aimless and perplexing, during which arbitrary characters are bestowed with inconsequential clairvoyance left and right and the plot wastes away, wheezing in the corner.

A series of deus ex machina moments prolong a perfunctory and muddled ending that occurs without finality or triumph, merely a slight whiff of putrid air. 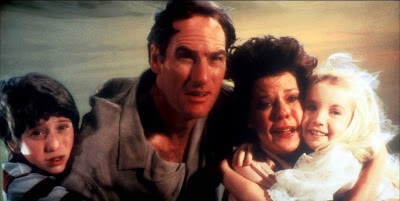 The power of family continues to prevail over the power of hack screenwriting.

Despite featuring performances from more or less the exact same cast, the years and the decreased production values have sucked the impact out of things. Previous standout JoBeth Williams is shunted aside aside in a role that highlights the ineffably weaker Craig T. Nelson's Steve as the central figure. His already unsteady performance is toppled by a script that requires him to wear a terrible haircut and a more or less permanent scowl, then parade around without a shirt an inexplicably numerous amount of times.

Zelda Rubinstein and Heather O'Rourke, the two most ethereally compelling figures from Poltergeist, are likewise given short shrift. O'Rourke had some raw talent, but with any child actor, she needed a good director to draw it out of her. Brian Gibson (of the Tina Turner biopic What's Love Got to Do with It - so at least he has some experience with horror) was evidently not that director. And poor Miss Rubinstein seems actively bored in a paranormal role turned as mundane as the neighborhood milkman.

She looks like she just dropped by to borrow a cup of sugar.

But in spite of its cavalcade of flaws, there's something mildly interesting lurking just beneath the waxen surface of Poltergeist II. First off, some of the original film's humor survives, especially in the family's reaction to their previous predicament (i.e. they have no TV and are forced to listen to sports on the radio; they discuss what exactly they should say on their insurance forms considering that their house crumpled itself into the void).

In addition, there is an occasional gesture toward the political acuity of Poltergeist. Where the first film was all about the dark side of Reagan-era suburbia, the sequel shines a light on the crisis of American masculinity. It's not nearly so intelligent as I made it sound, but the chink in Steve's armor is his doubt about being able to keep his family together. With his position as patriarchal authority figure in question, he allows the spirits to manipulate him through his weakness and fear.

There's an additional subplot that, while I wish it were explored more in depth, stings with truth. It comes to light that Diane initially wanted to have an abortion when she found out she was pregnant with Carol Anne. This revelation allows a rift to grow in the family unit as the ghosts gain strength, but is defeated when their love for one another overcomes this obstacle. 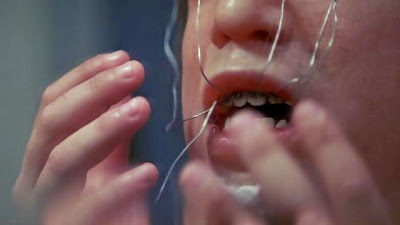 I don't have a caption for this. I just like this picture.

So all in all, Poltergeist II: The Other Side isn't remotely scary, falls prey to a disorganized screenplay, and doesn't truly explore the consequences of the titular other side. It's not particularly worth watching for any but the true faithful haunted house fandom, but if you decide to pursue it, there are several nuggets that you can manage to mine. Preferably if you're writing a thesis on ghost films or something, because at least you can make productive use of your wasted time.