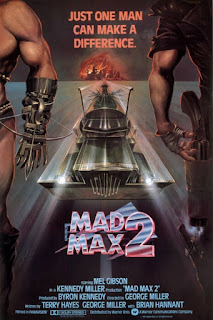 True legends are born, not made.

I'm holding on to that. Because otherwise I might beat my head against the wall in envy at George Miller, an Australian medical doctor who, with no formal film schooling, managed to create an iconic film franchise of astonishingly increasing returns, make a star out of Mel Gibson, and continue to make revelatory action pictures well beyond retirement age, along with a series of inexplicably successful children's films.

How can I possibly believe that this career just came from working hard? He must have been born with it. 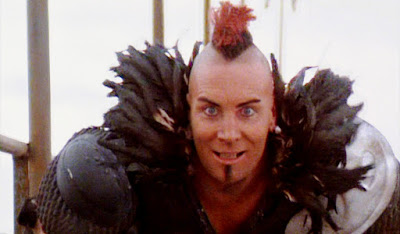 Or maybe it's Maybelline.

The source of today's undue rage is Mad Max 2: The Road Warrior, which is not only a terrific action film, but a terrific sequel, vastly improving upon the innovative low-budget cult gem Mad Max, released a scant two years earlier.

Following the titular Max (Mel Gibson) after the death of his wife and son at the hands of a murderous motorcycle gang catalyzed his transition from Calm Max, The Road Warrior launches us headfirst into the apocalypse. Max is a lonely nomad. With only his dog, Dog, for company, he wanders the barren wasteland of Australia in search of precious gasoline for his car, the last of the V8 Interceptors, which is totally a big deal because cars (Herbie: Fully Loaded, anyone?).

During his quest for Black Fuel, he stumbles upon The Gyro Captain (Bruce Spence), a whirligig pilot whom he takes captive and reluctantly befriends. After attempting to steal some oil from a car he watched get attacked by Marauders, he ends up taking the victim back to his camp back at an oil refinery in exchange for some of his company's supply. In the process, he becomes accidentally embroiled in a war between the refinery colony and the gang of leather-clad Marauders, led by the villainous Humungus (Kjell Nilsson) and his be-mohawked cronie Wez (Vernon Wells).

Wez (right) with his living motorcycle figurehead/leatherslave boyfriend. Gas might be in low supply, but evidently there is no shortage of hair dye in the apocalypse.

As you will discover, the common theme in this review will be "this awesome part of Mad Max is now bigger and better," but the most percussive and (literally) explosive of these elements are the newly ramped-up action sequences and the perilously strip-mined world they take place in. We first rendezvous with Max in the middle of a chase, the fiery denouement of which sees him sopping up precious gasoline from a bloody puddle.

This scene is but the first of many such moments that underscore the desperation, violence, and meager resources of the new world. In such an environment of loss and pain with many people attempting to cling to the last vestiges of old society (perhaps most notably in a shot where the Gyro Captain dabs his lips with a handkerchief after devouring the last morsels of a can of dog food), it is all too easy to slip into the mindframe of Max as his need to survive clashes with his instinct to help others.

This utterly real, utterly terrible world is fully realized with only a choice few setpieces scattered among the Outback, implying a vast and unforgiving world beyond. The grimy reality of The Road Warrior provides a dazzling venue for what are some of the most spectacular and kinetic car stunt sequences ever committed to film, and certainly the best to ever be seen by that point in 1981.

The slower sections of Road Warrior also serve meaningful purpose, etching in the particulars of the new world and elevating Max and his exploits to suitably lofty mythic proportions, and allowing the supremely talented actors to maneuver between the gritty and campy tones seamlessly but the real heart of the film is on the open road, where it works its unutterable magic.

The climactic closing sequence is a high-density burst of nitro that puts pedal to the metal and slams the viewer into their seat, but it is nearly matched by every single such sequence in the film. Cars ram and lunge and claw and bite into one another in endlessly creative, unendingly appetizing ways that would make even the most accomplished mechanics' hearts quail in their breasts.

All of the masterpiece-level work that would be found 34 years later in Mad Max: Fury Road is present here in spades: the pulse-pounding music, the seemingly endless deluge of screeching metal, and the epically insane proportions of its own ambition. In fact, The Road Warrior is perhaps an even more impressive feat, proving that George Miller has always had creative genius flowing through him, and that he was capable of achieving it at any level of budget, anywhere in the world, with any technology available. The man is an automotive movie god, and there is a seat waiting for him in Valhalla.

You'll forgive me if I prefer Fury Road more, but the bounty of the past is unfit to scoff at. That film would not exist without this one, nor is this one deficient in any way, save a slightly more stately pace. 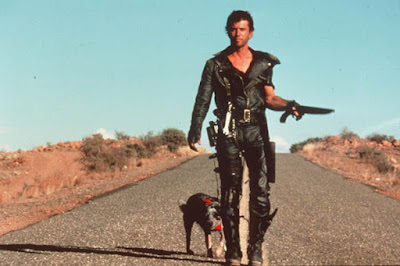 But cut him some slack, the dog needs to keep up with him.

It's a great shame upon my ancestors that I have come this far without extolling the virtues of the costuming, provided with gusto by Norma Moriceau. Piecemeal and strange though the costumes of Mad Max may have been, they could hardly hold a birthday candle to the roaring bonfire of Road Warrior.

George Miller's aesthetic blossoms into its fullest form here, dominating the screen with its unhinged fervor. With the film's profusion of wipes, staccato-framed action, and abundance of fetish leather, it's rather like Buster Keaton paying a visit to a Pride Parade, all jolting motion and exposed flesh.

Though each member of the Marauders and the refinery colony has their own uniquely compelling design (notable examples include the Feral Boy with his Niagara mullet, a blonde citizen with a ponytail reminiscent of Cindy Lou Who, and the pink-bearded bloke in his hot pink sports car), perhaps no single character in the history of cinema is more memorably costumed than Humungus himself.

All towering muscle and imposing bulk, Humungus' burned skull is hidden by a molded hockey mask that reduces him to a Michael Myers-type figure of blank-faced evil. And that's just about the only part of his body that isn't exposed. He... Well, take a look for yourself. 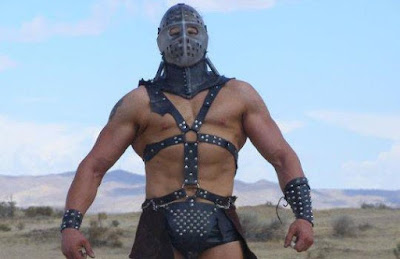 Please remember that this film was made by a straight man. Praise be to Australia.