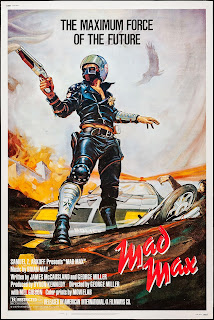 In the grand scheme of things, going from Mad Max: Fury Road directly to the original Mad Max is probably inadvisable. They are both utterly remarkable, but in very different ways. Though both bear the DNA of series auteur George Miller on their sleeve, the 2015 film is a showstopping spectacle of Hollywood filmmaking gone right whereas the 1979 original is a little miracle of low budget indie resources being stretched to the max. 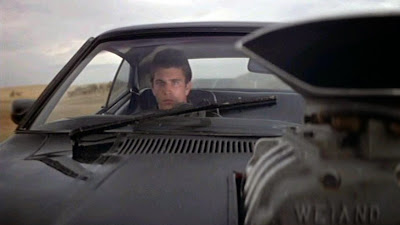 Mad Max isn't keen on spelling out the logistics of its plot or universe, but here's what's going on, gleaned from franchise knowledge and details around the edges: Max Rockatansky (Mel Gibson) is an Australian policeman in the not too distant future. The Earth's resources are dwindling and his force are the lone defenders of Justice among the marauding anarchists that roam the streets.

When a motorcycle gang led by the murderous Toecutter (Hugh Keays-Byrne) exacts revenge on another cop, Goose (Steve Bisley), he decides to exit the force for fear of becoming too embroiled in the terminal craziness of the pre-apocalyptic bedlam. However, his mind begins to change when the gang targets his wife Jessie (Joanne Samuel) and their young son Sprog (Brendan Heath).

Perhaps they've decided that he's an unfit parent, based on the evidence of that name.

Mad Max is a remarkable achievement, if not a truly great film. With a budget far south of $1,000,000, George Miller constructs an intimate, unknowably strange variation on our own world seasoned with some quite wonderful car chase action.

Persons much more studied in the ways of action cinema than I have declared that the style of Mad Max held heavy influence over the nascent automotive genre, changing the game forever. I have virtually no experience with the history of car movies (Herbie the Love Bug, anyone?), so I will take their word for it.

The film is full of motion. Clever, rhythmic editing keeps the action sequences humming along at a propulsive pace (and hides the most glaring limitations of the visual effects with great zeal) while the shots of bulging eyeballs that pepper the car crashes stamp the film with Miller's distinctive creative signature. Cars dodge and weave and smash and explode into screaming pieces with alarming frequency. It's pretty dang awesome, if I do say so myself. 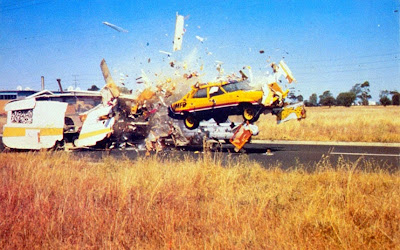 I had to lash my fingers together with a belt to avoid typing a "Greased Lightning" joke here.

But apart from the rousing action pulled from the wisps of a budget, Mad Max holds an inimitable aesthetic, clear even in the first stirrings of what would soon become a franchise dominated by a strong visual presence. The heavy use of leather, combined with the arbitrary piecemeal of the set decoration and the biker gang's costumes form a mélange of winking lunacy and high camp.

The world is populated with characters of all shapes and sizes, including some with numerous physical and mental disabilities that are in no way used as gimmickry, merely an accurate and tender representation of how the less fortunate among us have an equal drive to succeed in the midst of apocalyptic anarchy. Toss in a toddler with a gun and Jessie playing the saxophone on an idle evening, and you've got yourself an unforgettably idiosyncratic mise-en-scène. 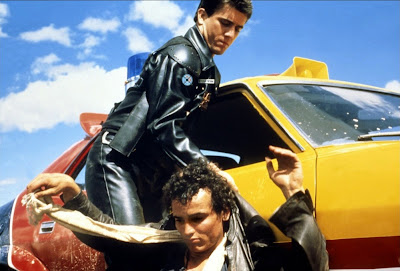 I would be remiss if I neglected to mention dat ass.

The performances of the film are all equally skilled at tapping into the heightened reality of Mad Max, but young Mel Gibson is the anchor that holds the film together, providing an utterly believable character that is not only the ambassador of Peace and Justice and Other Good Stuff among the land, but a fallible and realistic human being. 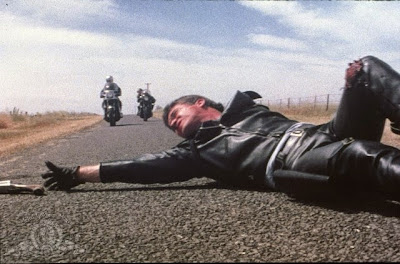 It's harder to achieve this in leather pants than one might think.

Unfortunately the remarkable wealth of material extracted from an unforgivable dearth of resources is still subject to the deficiencies of many an independent film. The music, which is inevitably keyed a little too high in the mix, feels more like Night of the Living Dead catalogue music, too portentous for many of the scenes it accompanies, occasionally veering into loopy Batman-style interstitials. In addition, there are several technical inconsistencies with the lensing of the film, but they are too negligible to truly damage the narrative.

And I hate to say it, but in the beginning of the first act and the middle of the second, the plot gets a little saggy, deflating some of the air from the movie. And the third act culminates in the worst kind of deus ex machina. It's fortunately redeemed by the most stunning chase and subsequent revenge of the film (cementing the transition to Mad from what could only have been previously described as Calm Max), but a little disappointment goes a long way when it comes to dispatching the main villain of a story.

He didn't even get to cut any toes!

All in all, the production Mad Max is about as chaotic and slapdash as its universe, which lends it its driving, aggressively one-of-a-kind tone, but also reduces the film to slightly below a true classic of the form. Nevertheless, it is an inarguably fun movie that shouldn't be neglected when reviewing the franchise, though its best function is admittedly as a bridge to bigger and better things.