The Pitch Is Back 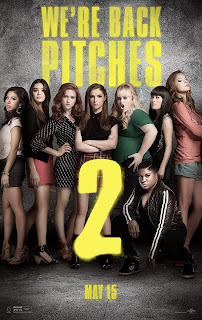 Pitch Perfect is an important franchise for me. When the original film opened in 2012, I was a dewy-eyed and apple-cheeked freshman out in the world for the first time. The lively and unexpectedly fresh college comedy was the perfect match for my budding lust for life. Now, the years have passed by and as I face graduation and the rest of my life, Pitch Perfect 2 has arrived to once again mirror my situation.

Just like me, it's a little more tired and a little less sure of itself, but equally eager to please. 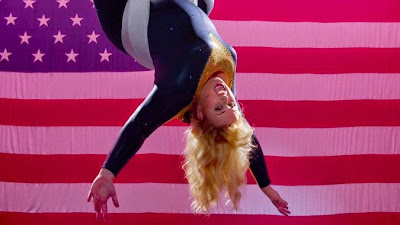 And in a slightly more precarious position.

Pitch Perfect picks up three years after the original, with the newcomer Beca (Anna Kendrick) having risen to the lucrative position of leader of the Barden Bellas, the Barden Academy's all-female a cappella team. After Fat Amy (Rebel Wilson) suffers an unfortunate wardrobe malfunction at a presidential gala, the Bellas are suspended from competition because screenwriter Kay Cannon would rather stick her hand in a meat grinder than see a fat woman naked.

Anyway, the one shot the Bellas have to regain their official standing is to win the World's A Capella Competition, to which they have a free pass, being the reigning U.S. champions. However, to accomplish this and beat their German Rivals, Das Sound Machine, they must struggle to rediscover their identity and find their sound, a conflict which also defines Beca's increasingly stressful workload at her secret internship at a music studio. As she suffers from the strain of splitting her focus, the newcomer/legacy student/songwriter/character we introduce so we can have another sequel once we lose Anna Kendrick, Emily (Hailee Steinfeld), feels neglected. Boo hoo. 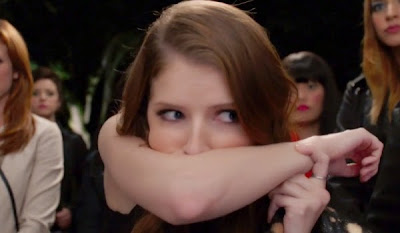 At least she gets lines. That's more than you can say for about half of the filler Bellas this time around.

Pitch Perfect 2 is a very complicated movie to like. While it was never going to be able to capture the lightning in a bottle of the first film, it does have moments that at least touch the glass. But these scenes, no matter how relatively frequent they may be, can't satisfactorily break through the haze of the film's stupefyingly distasteful humor.

The script's disdain for overweight women was admittedly present in the original film, albeit handled with more grace, but several series mainstays are turned into shrieking harpies of bigotry and new character Flo (Chrissie Fit) is seemingly culled from a first draft of a Song of the South-era Disney film about illegal immigrants. It's bad enough that the "Mexican but Actually Guatemalan" character is treated the way she is by others, but when her every line consists of references to third world diseases, wayward kidnappings, and drug barons, perhaps it's time to rethink your "female empowerment and inclusion" credo.

Add in the wildly overused commentator John (John Michael Higgins) whose "cantankerous old man with 50's values" character is a dead horse that is not only beaten but encased in concrete and sunk into the Hudson, as well as Cynthia Rose (Ester Dean), a once proud lesbian character who has been reduced to a predatory womanizer that sexually harasses her friends because she's so butch and can't control her lady bits, and you have a film that's immensely unpleasant to watch. 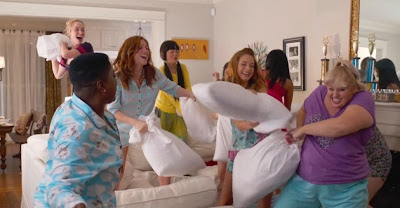 About as unpleasant as pillow fights. Have you ever actually had one? Overrated.

Pitch Perfect 2 is essentially an advanced exercise in character assassination, but several manage to survive the carnage. Anna Kendrick returns, as strong as ever, brimming with unforced charm, and her chemistry with the equally committed Rebel Wilson is the strongest returning element. Newcomers David Cross (as a deeply weird a cappella superfan) and Keegan-Michael Key (as Beca's unspeakably self-assured boss) also survive the fray with hardly a scratch, breathing life into the waterlogged lungs of whatever scenes they appear in.

And honestly, some moments are just damn funny, no two ways about it. From the revolving door of guest stars you never knew you wanted to the gags that subvert chick flick clichés with unparalleled ease, there's a lot to really enjoy in Pitch Perfect 2.

Unfortunately, the music really isn't as strong this time around, though the song choices are intermittently exciting. The Riff-Off 2.0 is exceptionally disorganized, and a mid-film medley is a glaring mistake, though there are a decent amount of well-heeled production numbers, especially from the slickly precise Das Sound Machine.

Probably the most flawed performances occur during the Bellas' "Find Our Voice" period. They're supposed to be terrible for narrative purposes, but the producers are keenly aware that they still need to sell singles. As a result, many of these tracks occupy a strange middle space between soullessly generic and halfheartedly creative. 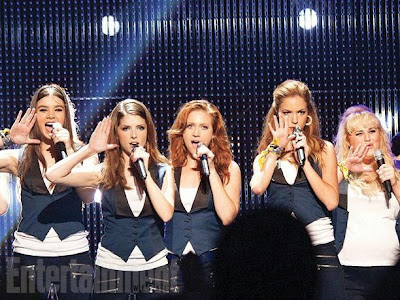 And the addition of an original song co-penned by Sia and Sam Smith (with all of the droning, syrupy lyricism that that phrase implies) plants the film securely in an insipid post-Glee territory for far longer than it needs to.

But in spite of its impressive slate of flaws, Pitch Perfect 2 is still lovable. 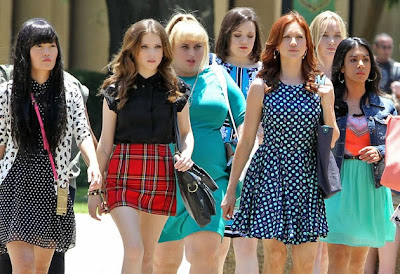 It's a mostly endearing comedy with a hard-won moral about finding yourself post-graduation, and it ain't gonna kill ya.

TL;DR: Pitch Perfect 2 occupies a dangerous zone in terms of offensive humor and leaden song choices, but is genuinely fun a good portion of the time.
Rating: 6/10
Should I Spend Money On This? If you were a fan of the original, absolutely.
Word Count: 940
Reviews In This Series
Pitch Perfect 2 (Banks, 2015)
Pitch Perfect 3 (Sie, 2017)
Also sprach Brennan at 9:40 AM