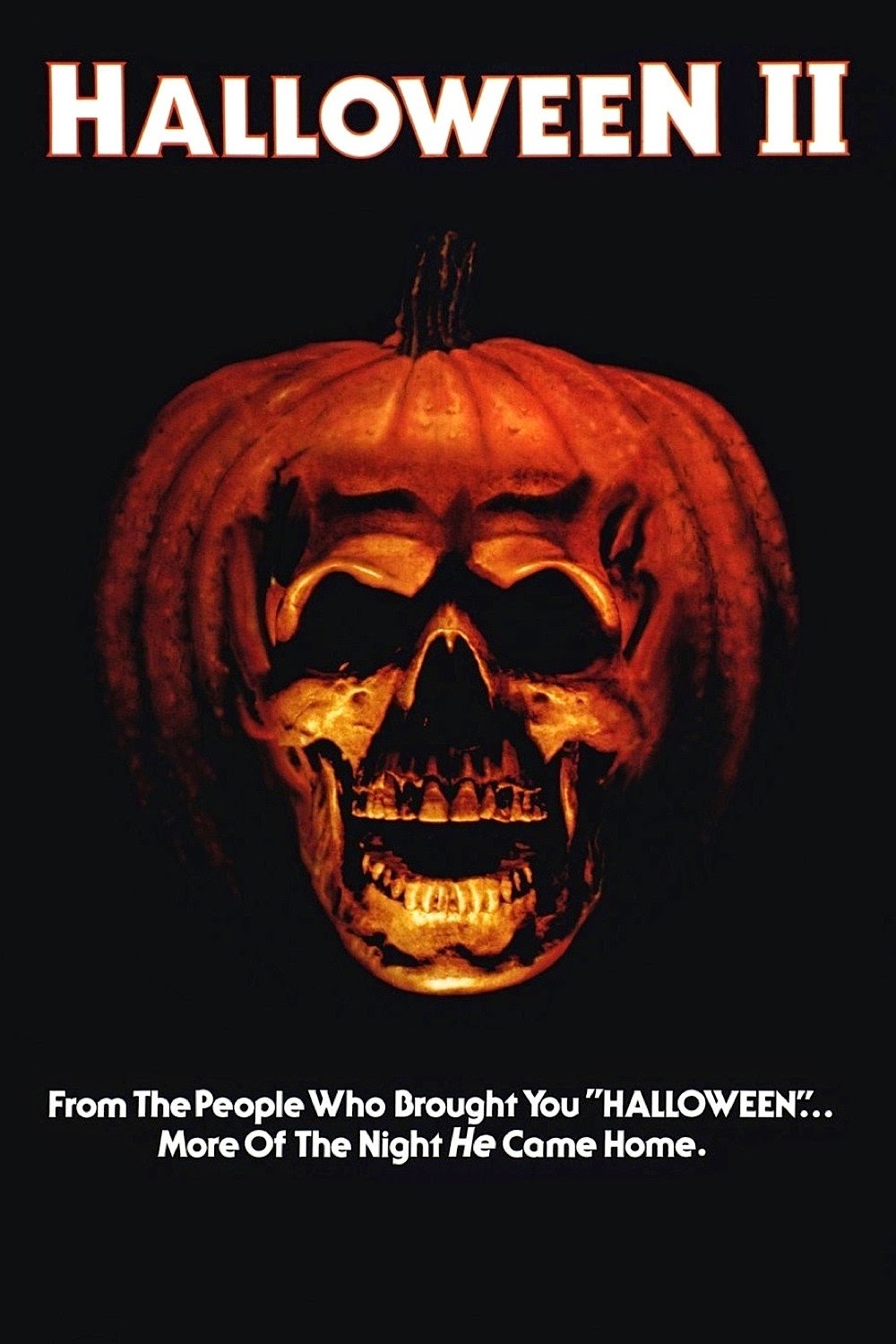 Sequels are tough. Especially for runaway hits that happen to be ruthlessly simple, auteuristic horror flicks that left half of its cast in body bags.

Getting John Carpenter to do things is tough. Even at a young age, he seemed to have perfected the "grumpy old man" schtick. So when the time came for his contractual obligation for Halloween II to kick in, he reluctantly agreed to pen the screenplay. But, aided by his partner Debra Hill and a six pack of beer, he tossed together a script with exactly none of the slickness and nuance of his 1978 masterpiece.

What it did have, however, was a heavy influence from 1980's Friday the 13th and its endless cadre of clones from the months following. Between 1978 and 1981, the genre had received a major facelift, and Carpenter's biggest strength was in his acknowledgment of that fact. Instead of turning in another moody, low key horror film, he turned his magnum opus into a glittering example of a 80's slasher crud.

The most difficult thing about viewing the film with open arms is separating it from its genuinely thrilling forebear. But if you can clear that road block, Halloween II is a sweet holiday treat. 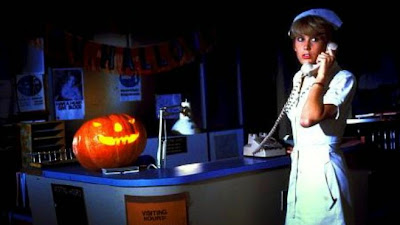 Like a Nerds Rope or something, not those gross Malted Milk Balls.

Halloween II picks up immediately after the original film, with Final Girl extraordinaire Laurie Strode (Jamie Lee Curtis) being sent off to the local hospital following the massacre of her best friends at the hands of escaped madman Michael Myers (Dick Warlock, also of Pumpkinhead). While the Myers-obsessed Dr. Loomis (Donald Pleasance) continues to chase the masked figure around the town of Haddonfield and the heavily sedated Laurie strikes up a tentative romance with cute ambulance paramedic Jimmy (Lance Guest), Myers stalks and kills the staff of the eerily empty hospital while attempting to get another crack at his escaped victim.

The film never for a single second escapes the looming shadow of Halloween. For all its decentness, especially compared to the crop of its 1981 peers, it's hard not to note "wow, the plot point that Laurie is Michael's long-lost sister really diminishes the effectiveness of the original without actually informing any of the narrative in the sequel," or "wow, I really wish they hadn't introduced the Celtic ceremony of Samhain in this one, which would have eliminated some of the druid nonsense in the later sequels," or even "wow, John Carpenter does not handle his beer well."

I'm gonna give it to you straight, here. Halloween II is not a great slasher film. It has a slapdash plot at best, supported by a series of fun, if not particularly imaginative kills. Such is the law of diminishing returns. But at all times it is a good slasher film. Such is the law of having freaking Dean Cundey as your cinematographer. (For those not in the know, Cundey is the man behind the original Halloween, Jurassic Park, Back to the Future, Apollo 13, and every other film on your dad's DVD shelf.)

As Myers stalks and slashes a variety of thinly etched-out nursing staff, Cundey soaks the goings-on in spooky Halloween atmosphere, lighting the slickly sinister hospital hallways with creeping, glistening shadows and the occasional splash of vivid, saturated color to shake up any visual complacency. It's gloomy and organic in an impossibly effective way, considering how difficult it is to create variation in a hospital interior. Halloween II is by far the best-shot slasher of the year and that is no small achievement considering that subgenre filmmakers were still actually trying in 1981. 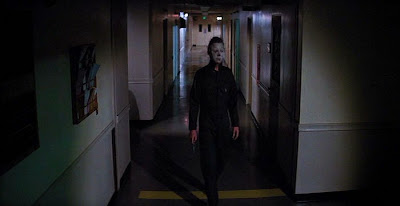 The bone-deep genre fatigue wouldn't begin to set in until 1982, when 43 of the godforsaken things squirmed their lumpen selves out of the womb of cinema.

It's a gory, exploitative hunk of cheese, but thanks to Cundey and - to a lesser extent - Carpenter, it's the aged brie of The Burning rather than the Kraft Singles of, say, Bloody Birthday. By far the most interesting parts of Halloween II stem from its departures from the original, engaging with the new slasher formula and highlighting just how much had changed in the genre in a few short years.

That's not to say it's better, but as an integral cog of slasher history it's fascinating. The classic minimalist score is spruced up with some truly challenging Flock of Seagulls synths, the cop character that replaces Sheriff Brackett (Charles Cyphers, who was presumably too busy to appear in more than one scene) looks like a cross between Dolph Lundgren and a frying pan, there's more gore and a higher body count, a Spring-Loaded Cat scare, and everything explodes. There's even an appearance by Dana Carvey in a small role! It's like the vanilla ice cream cone of Halloween was dipped in the decadent chocolate coating of the 1981 slashers. 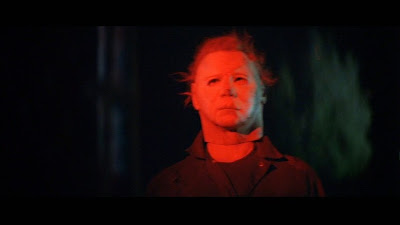 I'm making a lot of food puns. Maybe I should eat breakfast.

There are still some decently scary moments while Myers stalks some unwary staffers up and down the preternaturally empty hallways, but for the most part the 80's aesthetic plays it a little too hot and heavy with Haddonfield's favorite serial killer. He is shown in full far too often and far too early, diminishing his power as a mysteriously evil force of nature. And honestly, Dick Warlock can't hold a candle to the original Nick Castle performance, rendering the character a tad too mundane for my liking.

Actually, all across the board the performances are diminished. Jamie Lee Curtis' powerhouse turn as Laurie is diluted through the multitude of Meat as the cardboard characters sneak out, hook up, and get knocked down. In fact, Laurie Strode, the supposed main character only gets about 25 minutes of screen time in the entire movie, during which she is swallowed beneath the most hideously waxy broom-bristle wig I've ever had the displeasure of watching.

And I haven't done the math on this, but I'm pretty sure Myers could beat her total run time by almost half. When your villain is onscreen longer than your heroine, you know somebody beat too many eggs into the batter. 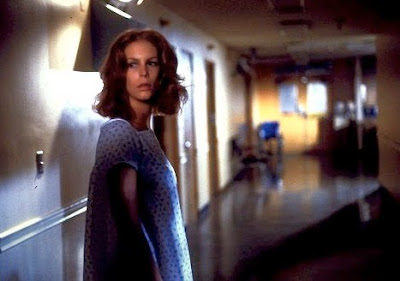 So JLC is out of commission, wasted on a character who is heavily sedated for the bulk of her already truncated appearance, Myers is bland, and even Donald Pleasance's reliable Dr. Loomis has sprung a leak. The character himself seems to be getting tired of his incessant monologuing about the pure evil and yadda yadda yadda of Michael Myers. But hey. It's not the original film. The acting is still about 800 degrees better than the average slasher. It just feels so much more egregious because of the gold it follows.

Halloween II has the kind of kills that would revive any garden variety lackluster slasher: hypodermic needles, hot tubs, scalpels, and all sorts of creative misuses of hospital implements. The effects themselves look a tad too "accident at the acrylic paint factory," but they're jolly good campy fun.

Honestly, the biggest issue with Halloween II is that it's scatterbrained. It can't focus on its main characters, it gives too much credit to its killer (who works best as a haunting metaphor rather than an active presence), and it's a little too chintzy to earn the truly wonderful talent behind the camera. But hey! It did provide the song "Mr. Sandman" to the franchise's soundtrack, so it's definitely not the worst thing that could have happened to Haddonfield's finest.

No, that would be the Rob Zombie remake, but we'll get there my pretties. Unfortunately.

Killer: Michael Myers (Dick Warlock)
Final Girl: Laurie Strode (Jamie Lee Curtis)
Best Kill: Ben Tramer is hit with a cop car and slammed into a nearby van, which then explodes, lighting him on fire. The best part is that this is the guy that Laurie said she had a crush on in the first film.
Sign of the Times: The way Michael Myers learns of Laurie's location is that a kid walks by him carrying a ghetto blaster turned to the news.
Scariest Moment: Michael Myers slowly appears behind Janet after she discovers Dr. Mixter's body.
Weirdest Moment: Apparently Michael Myers broke into an elementary school just to make a crayon drawing and stab it, then write an ancient Irish word on the board for kicks.
Champion Dialogue: "Amazing Grace, come sit on my face."
Body Count: 10
TL;DR: Halloween II is a scattershot slasher that's too generic to live up to the power of its predecessor, but still pretty fun in its own right.
Rating: 7/10
Word Count: 1612
Reviews In This Series
Halloween (Carpenter, 1978)
Halloween II (Rosenthal, 1981)
Halloween III: Season of the Witch (Wallace, 1982)
Halloween 4: The Return of Michael Myers (Little, 1988)
Halloween 5: The Revenge of Michael Myers (Othenin-Girard, 1989)
Halloween: The Curse of Michael Myers (Chappelle, 1995)
Halloween H20: Twenty Years Later (Miner, 1998)
Halloween: Resurrection (Rosenthal, 2002)
Halloween (Zombie, 2007)
Halloween II (Zombie, 2009)
Halloween (Green, 2018)
Halloween Kills (Green, 2021)
Also sprach Brennan at 9:53 AM