It's that time of year again! While you're getting out the sunblock and your big floppy hat, please give a warm summer welcome to Fright Flashback! Every week I will be reviewing an old horror movie that shares a theme, cast/crew member, or genre with the week's big release: a sort of spiritual predecessor. Again, very special thanks to Tim Brayton at Antagony and Ecstasy for the idea I more or less shamelessly ripped off and modified. I stand on the shoulders of giants, what can I say? It's comfortable there.

This week's new release is the long-delayed remake of just about the only horror classic left on the chopping block: Poltergeist. In celebration, we are heading back to 1982 to appraise the original property. 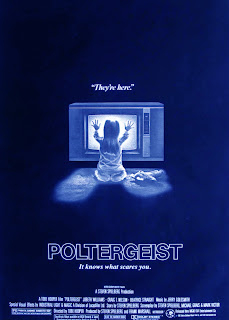 I haven't seen the original Poltergeist since I was a child, and there is perhaps no better condition in which to view it. As one grows older, one gains a more mature appreciation for the deeper themes present in what is a truly remarkable movie, but the level on which Poltergeist works best is in its pure spectacle, and the childlike wonder and appreciation for the terrors that lurk in the dark shadows of the suburban idyll.

There has long been contention about the directorial authorship of Poltergeist, and I would be remiss by not at least nodding toward the controversy. Though the credited director is Tobe Hooper of The Texas Chain Saw Massacre and, one year previously, The Funhouse, reportedly the bulk of his work was performed by producer Steven Spielberg during a break on his own film, E. T. (both films came out within a week of each other - what a time to be alive, am I right?).

Honestly, my money is on heavy Spielberg involvement, but it's rather beside the point. We'll never know the true answer, and the fact is that both of them were there, resulting in an indisputable classic of the genre. What more is there to say? 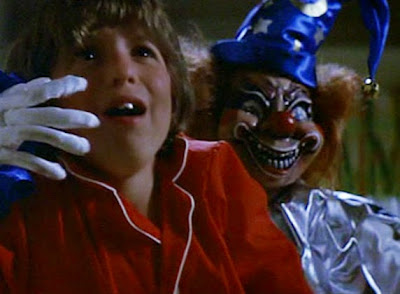 Poltergeist's plot is a simple one, albeit dressed up with some rather detailed theological accoutrements. The Freelings are a middle class family who live in one of the identical houses of the Cuesta Verde suburb of an unnamed California town. Father Steve (Craig T. Nelson) is a realtor responsible for selling a good half of the properties in the district, mother Diane (JoBeth Williams) is young and loving, but softly frustrated with her responsibilities as a parent.

Having had her first daughter, Dana (Dominique Dunne), at the tender age of 16, her youth has been compromised. Robbie (Oilver Robins), the only boy, and Carol Anne (Heather O'Rourke), the youngest, don't exactly subtract from her strain. The conflict of Poltergeist reflects the conflict inside Diane: despite making every effort at achieving the trappings of domestic bliss, something is insidiously, indelibly wrong with the whole affair.

The very nooks and crannies of the Freelings' familiar abode become a hotbed of paranormal activity when a ghostly presence asserts itself through the static on the television (Remember when TV actually ended? I don't.). At first, the disturbances are harmless, almost playful, but they quickly crescendo into a nightmarish conglomeration of terrors, culminating in Carol Anne's being spirited away into another realm. With the help of the paranormal crack team of Dr. Lesh (Beatrice Straight) and her associates, as well as a third act showstopper appearance by the advanced medium Tangina (Zelda Rubinstein), the family attempts to reclaim their lost child from the unknowable menace. 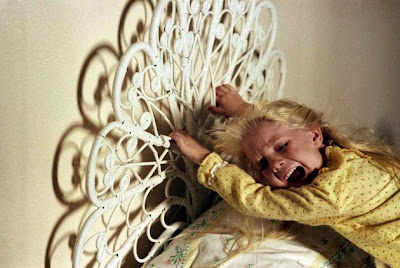 The housing market was really rough in the early 80's.

First and foremost, Poltergeist is a rapturous showcase for MGM's state-of-the-art special effects. Second, it is a lovingly detailed character drama about the American family. Third, it is a down-home shocker chockablock with instantly iconic moments.

Let's begin with the first, especially because that most cherished element is perhaps the weakest of the film. I don't mean to say that the ample special effects are anything but spectacular. They are, but if we're going to be completely honest, most of them have aged about as well as the Flock of Seagulls haircut.

It's easy enough to still find tension in these moments thanks to the emotional heft of the characters and storyline, but the film devotes a great deal of time to curdled milk visual effects that remain charmingly cheesy but dangerously challenge the truth and reality at the core of its narrative.

Sometimes it feels a little like an Eldritch Horror-themed high school prom.

That's all well and good, but if you dig a little deeper under the topsoil of shiny chrome ghoulies, Poltergeist has an impenetrably solid thematic bedrock. The entire first act serves to deliver the ultimate experience in suburban bliss, only to tear it down time and time again for the remainder of the film. In its ineffably phantasmagorical way, it peels back the facade of the American Dream to reveal that, in fact, all is not good in the neighborhood.

The trappings of suburban bliss become conduits for hellish monstrosities: chairs, dolls, closets, televisions, and even the very landscape surrounding the house. And yet the family unit remains strong. No, Speilberg and Co. are not warring against the nuclear family - his many many films during this era would disprove that immediately - but rather the Reagan-era greed and materialism that led them to this moment in this place surrounded by these suburban trappings (obtained to the detriment of the graveyard that once stood on that very ground, forcibly evicted by a mercenary realty company*).

Not only is this fascinating, it's downright terrifying. As I said before, the special effects have long since lost their luster as anything other than a sideshow amusement, but the film so firmly believes in its world that its easy to get caught up in the undertow.

JoBeth Williams especially sells the hell out of even the most Novelty Barn-looking effects, dragging the film into raw, unadulterated reality with an unfiltered performance of pure strength. Craig T. Nelson can't quite match her (his eyes are remarkably uninvolved in whatever he seems to be doing or saying), but as the useless patriarchal figure he does the trick.

And don't even get me started on Zelda Rubinstein, whose exorbitant weirdness sets the film ablaze with a new inferno after its pace starts to flag a bit in the third act, during which we must sit through an alarming amount of philosobabble. It is in this quadrant of the film where it hits the peak of its strangeness, but her unrestrained performance breathes life into a scene that, when you think about it, is literally just a small woman throwing tennis balls at a strobe light.

Honestly, the simplicity of the finale ignites the imagination rather than exhausting the eyes, providing the perfect backdrop for the film's emotional climax.

But I digress. I was speaking about acting, and I would be remiss if I neglected to mention Heather O'Rourke. Although her untimely death at age 11 casts an eerie pall over the entire performance, she deserves immense credit for what she was able to deliver without the shadow of tragedy. Simultaneously angelic and uncanny, her performance crystallizes the tension of the film with a thoroughly engaging, disturbing, immensely adorable charm. It's hard to explain rationally, and it may just be a credit to whatever director happened to be coaching her, but it's a performance that you feel in your gut, not your brain. 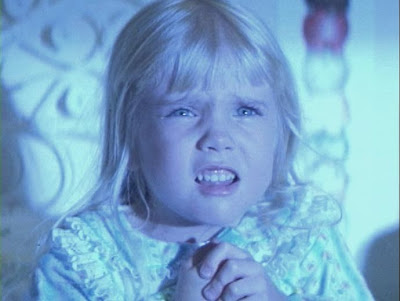 I'm a little in awe of how mystifyingly unsettling she is, and what happened to her is a damn shame.

But for all that Poltergeist is genuinely frightening, it also packs a keen sense of fun. Another tally mark in the "Spielberg" column, the film is like an amusement park adventure ride, with an unflagging levity weaved throughout the horror. Jerry Goldsmith's score compounds this tone tremendously, with a leeringly creepy spin on childhood nursery rhymes that tilts unexpectedly into open-faced childlike wonder.

I have some personal qualms about the overlong ending, which plays off like a laundry list of VFX sequences that were conceived in the brainstorming process but were forgotten until the end of production and haphazardly shoved in one after the other like shiny playthings in a toddler's toy box.

It also doesn't help that nearly every single one of these effects are by far the best (and most credible) of the entire film (a personal favorite being the elongating hallway). And all of them take place after the conclusion of the film's climactic sequence.

But honestly, any faults with Poltergeist, no matter how large, are mere nitpicks. There are enough that I hesitate to instantly proclaim its masterpiece status, but as a whole the film is an unutterable classic of the form, and I would scarcely dare to impeach that.

*Side Note: It is explicitly noted in the film that the house is not built on an ancient Indian burial ground. That little tidbit seems to have slipped away on the wind.

TL;DR: Poltergeist is a lavish, effects-filled thrill ride, but its most important value is as a treatise on the hazards and fears behind American suburbia.
Rating: 8/10
Word Count: 1568
Reviews In This Series
Poltergeist (Hooper, 1982)
Poltergeist II: The Other Side (Gibson, 1986)
Poltergeist III (Sherman, 1988)
Poltergeist (Kenan, 2015)
Also sprach Brennan at 9:33 AM