Census Bloodbath: As We Go On, We Remember All The Lives We Lost Together

I know a lot of my features have been leading up to this, so it can't come as a surprise, but... I'm graduating college today. As I prepare to be punted out onto the football field of life, let's take a moment to reflect on all those poor young souls whose futures were cut short in the name of the American slasher film. 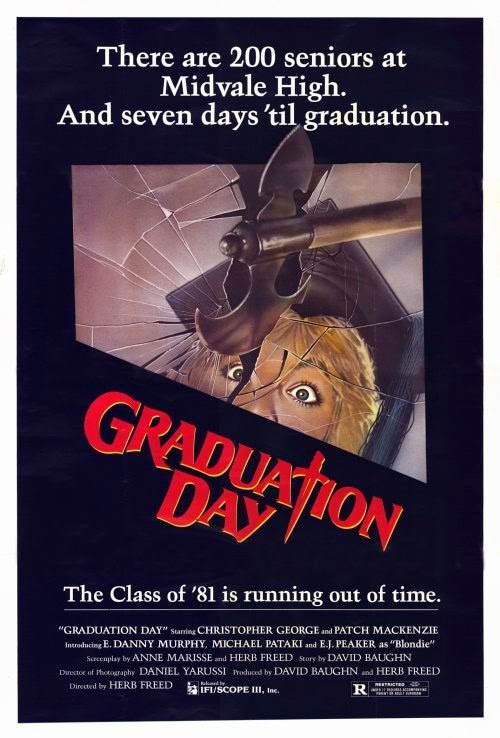 Troma is not known for making good films. I've explored this to some length on Popcorn Culture when I reviewed the decadently unfunny Mother's Day, the clichéd and insipid Splatter University, and the dull as dishwater Girls School Screamers. But the thing about the company is that they throw themselves so wholeheartedly into churning out crap that you can't help but have the faintest glimmer of appreciation for them.

And I mean the faintest.

1981's Graduation Day is an early Troma slasher, so it's thankfully free of the over-baked slapstick abortions that would soon typify the company's output, but it's still a bottom of the barrel entry with a scatterbrained plot, a dismal paucity of gore, and a nasty attitude problem. And yet there's that glimmer. 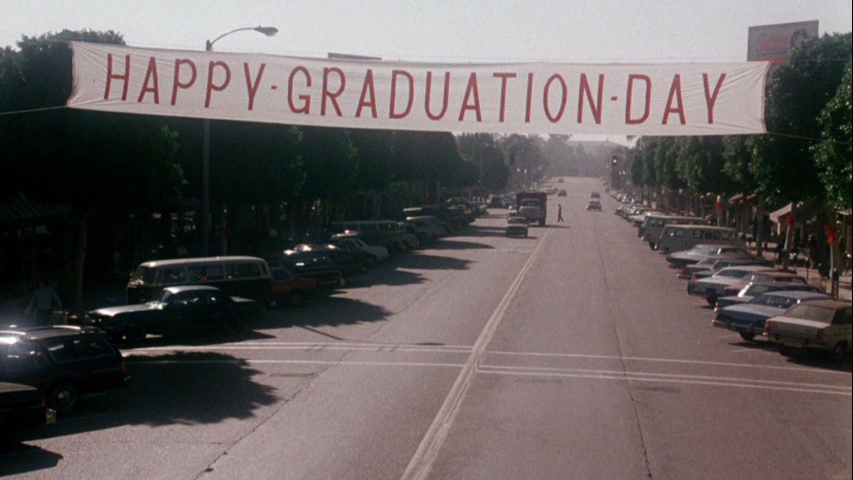 Graduation Day opens on a high school track and field event edited so choppily and rapidly that you need to slam the pause button to even see anything but a pulsating mass of color and fleshy form. It is so clearly playing off of the MTV aesthetic that it's legitimately shocking to find out that the film precedes the network by several months. I guess the dirty truth is that MTV ripped off of Graduation Day. Slashers are all about skeletons in closets, amirite? 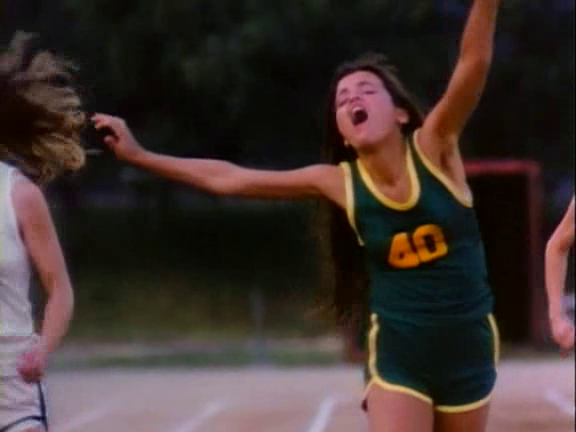 God, it's gonna be one of those reviews, isn't it?

When promising young track star Laura Ramstead (Ruth Ann Llorens) is pushed to the edge of her endurance by Coach George Michaels (Christopher George of Pieces and Mortuary), a blood clot crashes into her brain like a shot put, sending her to an early grave after she passes the finish line.

Two months later, Laura's sister Anne (Patch Mackenzie) arrives from her Navy service in Guam for the high school's graduation ceremony, at which she is accepting an award on Laura's behalf. However, what is meant to be a solemn, but happy occasion is marred when the day before the ceremony, a killer in a fencing mask begins stalking and murdering the surviving members of the track team, timing his kills with a track stopwatch.

That's pretty much it for the plot, which consists almost entirely of lackluster stalking sequences, semi-creative kills, and utterly unnecessary side characters' antics, pitched between which are preposterously long swaths of filler that stop the film dead in its tracks. The most notable of these moments is the five minute-plus segment of the semi-known New Wave band performing their song "Gangsters of Rock" at a roller disco in that screeching goat style that only teenagers have the iron will to listen to, although other dead patches include a fully rendered gymnastics routine and the "Graduation Day Blues" hootenanny and harmonica jamboree. 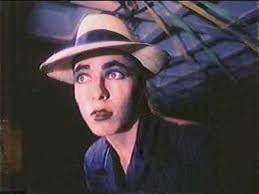 As you might have been able to surmise, Graduation Day is a tad bit disjointed. Each scene wholeheartedly rams into the next with all the finesse of a bumper car on PCP, rarely if ever having anything to do with the plot at hand. The heroine vanishes for a great portion of the middle of the film, the red herrings are thin on the ground, and there is no dimension whatsoever given to the vast majority of the overgrown potatoes that dare to call themselves "characters."

The more prominent of these figures include Kevin (E. Danny Murphy), Laura's ex-boyfriend who has taken her death hard, Principal Guglione (Michael Pataki of Halloween 4 and Sweet 16), who could hardly give a rat's ass that his students are going missing, and Mr. Roberts (Richard Balin), a lascivious music teacher who sleeps with Linnea Quigley and subsequently evaporates from the film. As the scriptless meanderings unspool across the screen, random squealers Joanne (Karen Abbott) and Doris (the Vanna White) wander in and out of situations, improvising incoherent babble like a drunken, giggling Greek chorus.

To call Graduation Day unprofessional would be an insult to amateurs. I've eaten croutons more professionally made than this film. The first and second acts are about as lively as microwaved roadkill, and the third act is even worse, lifting entire passages from the score of Psycho and rendering its military protagonist a screaming hysterical girl as she flails through an overlong denouement. The cinematography is murky at best, the gore is sparse and undercooked, the men of the film are uniformly disgusting, misogynist creatures, the editing works at far too fast a clip to maintain any semblance of tension, and most of the actors seem actively bored.

Patch Mackenzie can only display emotions in brief, emphatic flashes, Christopher George obviously can't hear through the cloud of hair dye around his head so he shouts all his lines, and E. Danny Murphy alternates between sleepwalking and high-pitched kettle shrieking as he attempts to obscure the fact that he's clearly 10 years too old for the part behind a curtain of greasy ringlets. And let's just say that it's a good thing Vanna White found a steady job touching letters, because reading and speaking them is not her strong suit. 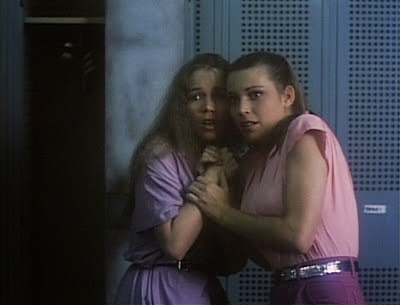 That pink blouse/shimmer belt combo is also not a strong suit. ...Geddit? ...Please don't leave, I'm only in the second year of this godforsaken decade project.

But no matter how many insults I can lob at Graduation Day, they just keep pinging off like bullets against Superman's chest. It is not, was not, and will never be a good movie, but there's just enough enjoyment to be eked out of the thing to not render it totally useless. First off, its utterly strange editing pattern is kind of endearing, like a first grader's drawing stuck to a fridge. It's admirably wonky, zipping back and forth between shots at a speed that defies the capacity of the human eye, launching from an inexplicable profusion of POV shots into a machine gun clatter barrage of flashback footage, half-glimpsed movement, and unknowable, subconsciously-received imagery. It's not successful, but at least it's trying something.

Second, it's campy as all hell. This fact is frequently masked behind the sheen of technical incompetence, but enough of the potent stuff squeezes itself out to keep the film from tipping over the edge. The slasher hadn't quite reached its decadent era yet, so many of the kills are uneventful, but several of them are utterly unique, especially the scene where a jock is stabbed with a football attached to a javelin. You just don't get that every day.

He wide-received that pigskin right in his penalty zone.

Whether it's a gymnast being killed while shaving her legs in the sink, the camera lingering on the pert ass of a deceased victim, or the heavy woodland that seems to be located in the middle of school property, Graduation Day is a barrel of unintentional laughs. Not to mention that the dialogue and production design are out of this world, in the sense that they must have been improperly translated from Martian.

It's anticlimactic, it's erratic, and it's just plain weird so much of the time that you can't help but feel like you've stumbled across a psychedelic art piece that taps into that secret space between dreams and reality. Graduation Day challenges everything that we know about contemporary filmmaking, not in an experimental way, but in a manner reminiscent of a baby attempting to mimic its parents' voices.

It's a deranged, bifurcated reflection of films like Friday the 13th as viewed through the dirty, coke-smeared looking glass of somebody who either knows nothing about life or way more than we can ever imagine. It's an experience, is what I'm saying, and while I don't have the patience to find it a true bad-good gem, it's a relentlessly compelling, awful, delirious, heart-wrenching, apocalyptic, quasi-satisfying film experience. Watch at your own risk. 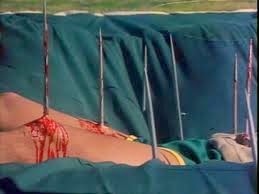 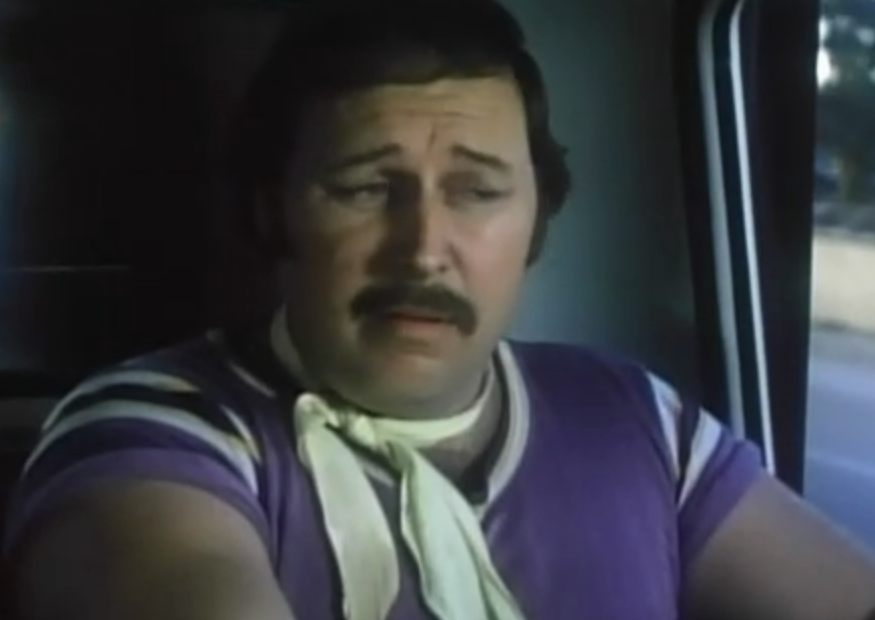 Scariest Moment: Anne approaches Kevin's grandma, who appears to be dead. She is not. ...This isn't a particularly scary movie.
Weirdest Moment: The truck driver insists that he gets to cop a feel on Anne because he's "a taxpayer."
Champion Dialogue: "Sit on it and rotate!"
Body Count: 9
TL;DR: Graduation Day has a valuable campiness that is somewhat tempered by how extremely dull and erratic it is.
Rating: 4/10 (though my sliding scale for grading slashers is taking a lot of strain on this one - but what the heck, I'm in the graduation spirit)
Word Count: 1573
Also sprach Brennan at 7:04 AM